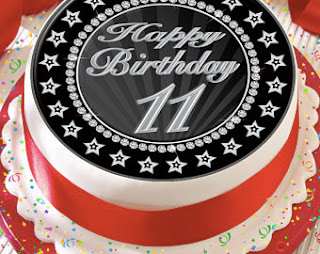 
I cannot believe it has been so long; when I registered this domain name, St. John Paul II was still pope and even had a year left in his pontificate. When I started posting regularly, Benedict XVI had not yet even issued his motu proprio Summorum Pontificum. Since those early days, the two USC sites have featured over 1,700 essays. Just looking at that number kind of astonishes me—that I've ever had the time to write so much. Of course others contributed to that as well, for whom I am truly thankful.

It's surreal how much things have changed since then. Back in the old days, I felt like, even though the American Church collectively might have a profound case of rectal-cranial inversion, at the very least the Big Man in Rome had our backs. I could make a bold and determined stand against the problems that beset me because I stood with the Universal Church and the Pope Over the Water who was reigning justly and speaking the truth to a rebellious, stubborn people. Now, in 2018, the feeling is quite different.  The landscape is a littler grimmer. I feel less like a soldier making a brave stand before the walls of his city and more like a rogue wanderer, a kind of Catholic Johnny Appleseed roaming about an unsettled land scattering seeds and hoping they will take root wherever they may fall. And I am more uncertain of my own standing. That's how I feel. And note I am careful to say feeling, because obviously there is a lot of room for subjectivity here.

As always, I am sorry I could not write more. I remember one reason I had the time and initiative to begin this blog was because it was an outlet to write for fun about subjects important to me; nobody cared what I wrote and everything was just a hobby. Now I write professionally and I have so many projects bogging me down that I can't see the end of it. Don't get me wrong, I am very happy to be writing professionally now, but there is a tinge of sadness that I can't just be a hobby blogger anymore.

That being said, I am finding myself with a bit more free time than last year and hoping to do some more writing. I'm also really wondering what to do about the other site; it's a very old Joomla platform and it is starting to get kind of glitchy. A lot of times the images aren't showing up anymore and the formatting gets off at times. I don't really have the money to invest in a new website, nor the time to transfer it all over to something new, but I also don't like the idea of the old site just continuing to get glitchier as its plug-ins go out of date and stop being supported. If anyone has any suggestions, I'd love to hear them.


One thing I am planning on doing in the near future is making an appeal to help me get my RCIA notes and outlines translated into Spanish. I have a native Spanish speaker ready and willing to do the translating work but I just need to raise the funds to pay for it. I will be doing a post or video about this in the near future; if you are interested in contributing, email me at uscatholicam[at]gmail.com. If this is successful, I will then go on to getting them translated into Arabic and then who knows.

Thank you again for a wonderful year; the comments and feedback I get from my readers is what makes this endeavor so rewarding. An active and well-regulated combox is a gift to readers and the blog owner alike. Even Lionel with his ridiculous spam has a soft spot in my heart.

God bless you all.

~Boniface
Posted by Boniface at 12:00 AM

These USC anniversary posts are the primary way I tell the passage of time. I'm glad to hear you're doing well professionally and hope you balance it well with family life. This is the only blog I check in on regularly. I agree with your feelings of no longer being a soldier on the walls but rather a wanderer in the wild. It's as you write in Into the woods too, but, as it has been said: this is an hard saying.

As to your website and financial question, try crowdfunding. Maybe people will come out of the woodwork, maybe they won't. You can't go wrong.

Dear Boniface. You are an excellent writer and the main reason for that is the quality of your soul and its intellect and will.

The world could use about 1 billion others like you

ABS has learned SO much from you.

JULY 5, 2018
These points should be clarified by the religious communities who are in communication with the CDF and Ecclesia Dei.Ask them if everyone can interpret Vatican Council II and EENS as does the blogger on Lionel's Blog.
http://eucharistandmission.blogspot.com/2018/07/these-points-should-be-clarified-by.html

You have one of the best blogs in the Catholic sphere.

It is fitting that you have more time to write this year because it seems like we are about to enter an exceptionally challenging period in the life of the Church.

For a long time it seemed like the paradigm of Bl. Pope Paul VI and Pope St. John Paul II would succeed in halting the conversion of the Catholic realm to liberalism while fortifying the conciliar reforms. With the exception of the SSPX, major schisms were avoided. Incompatible theological visions of Catholicism were contained by consigning them to what may have seemed like obscurity. Papal documents became prolix and of interest mostly to experts. As such, papal condemnations became pedantic, subject to dispute by theological experts, and lacked the gravity of social relevance, although they maintained orthodoxy and held Catholic liberals at bay.

I am not convinced that Pope Francis will attempt reforms that would provoke an overt, historical scale crisis. Nonetheless, that not just traditionalist but conservative Catholics have become concerned about his governance is remarkable.

The possibility of such a crisis has become more plausible. God save us if it does.