The China-Vatican Deal: A Bowl of Pottage 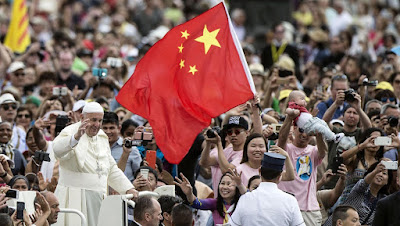 This month the Vatican and China have entered into some sort of agreement that is meant to allow China's Catholics to recognize the pope as the head of the Church while granting the Communist government of China a say in nominating bishops. This is supposed to normalize relations between Church and State there.

I say "some sort of agreement" because the details of this concordat are being kept confidential. For example, while the agreement calls for the legitimization of the current bishops of the Chinese Catholic Patriotic Association, it's uncertain exactly how future bishops are going to be selected—although it seems likely that the Communist government will select bishops, but the Vatican will have some sort of "veto" power, but it's unclear how often the Vatican can exercise it.

There are many facets of this bizarre agreement we could question. For example, in an age when the Vatican is so woke that it vigorously denounces plastic litter in our oceans and issues documents on the "Ten Commandments for Drivers", why the silence on China's egregious litany of human rights abuses?

Why is the Vatican ignoring the aspirations of Chinese Catholics, both lay and clergy, who have suffered for their fidelity to the true, underground Church?

What are we supposed to think when the details of the agreement are secret? If this agreement is so great, why are the details secret?

Why does the Vatican have any confidence that the Communist Party of China is acting in good faith, especially since even as the agreement was being drafted, Christian churches were being vandalized and demolished throughout China by government agents?

Why no adamant, principled stand for religious liberty in a place where Catholic priests of the underground Church regularly die in custody or under mysterious circumstances? Or is religious liberty and dialogue only something we trot out when Catholics want to do things like spend money to build Mosques for Muslims?

Yes, there are a lot of ways we can consider this; in my opinion, none of them make this deal look any better. But, as I see it, the crux of the matter is this:

Pope Francis has given up the very real authority to name bishops in exchange for a largely symbolic recognition as head of China's Catholics.

The pope has effectively washed its hands of the underground Catholic Church in China in exchange for some momentary media coverage and a mention in the history books.

The true faith in China is going to be hopelessly muddled now. The distinction between the true Church and the state Church will be obliterated. Who is validly consecrated will become a moot point; way back in 2007, Pope Benedict lamented that the status of those government bishops who had been legitimized remained murky even after legitimization due to misinformation. "In most cases," Benedict said, "priests and the faithful have not been adequately informed that their Bishop has been legitimized, and this has given rise to a number of grave problems of conscience. What is more, some legitimized Bishops have failed to provide any clear signs to prove that they have been legitimized" (Benedict XVI, Letter to Chinese Catholics, 2007). This problem will only grow worse with more legitimization coming. The Catholics who have remained faithful to the underground Church will increasingly wonder why they are suffering so much on behalf of an institution that seems embarrassed by their existence.

Francis has exchanged China's birthright for a bowl of pottage.

Why? Because the Pope gets to be RECOGNIZED AS BOSS by the Chicoms. Peronist at heart.

He has ceded the Chair.

@Windmill, don't be ridiculous. A bad concordat does not mean he has "ceded" the chair.