Praying Through the Mass 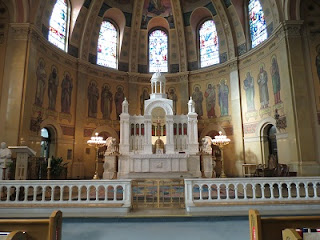 Last weekend I attended the Extraordinary Form Mass at Our Lady, Star of the Sea in Jackson, Michigan. I am blessed to live within an hour of several weekly EF Mass options and Star of the Sea is a beautiful historic urban church particularly well suited to the splendor of the Mass of Ages (pictured above).

I was feeling kind of lethargic and depressed when I went in. I didn't bother picking up the Mass booklet or the printed worship aid. I wasn't interested in following along or anything. I just slumped down and leaned my head on the pew in front of me and started to pray.


The music was beautiful, though, as always. It's easy to just relax and let the chant seep into your heart the way the smoke of the incense wafts into your head. I confess, by the time the Kyrie had begun, I was kind of in my own inner world. The beauty of the music had got me moved and I began contemplating the issues in my life, sorting through my troubles and bringing them before God.

I continued in this manner for some time, nominally going through the motions of standing, kneeling, etc. but the entire time deeply immersed in my own inner life and not giving much heed to externals. I don't think I even noticed the homily.

Before I knew it, it was the final blessing and the Last Gospel. It was then that I realized that I had been in prayer the entire Mass. I don't think I have ever prayed continuously through the entirety of a Mass before, not like this at least. And I felt great afterward.

As I left the church, I realized that such an experience probably could never have happened at a Novus Ordo Mass. The Novus Ordo has too many "interruptions" and makes too many external demands upon the worshiper with the gestures and responses one is expected to make. The "active participation" that the architects of the Novus Ordo envisioned too often turns out to be a kind of surface activism ("I'm participating because I am physically moving and saying lots of things"). If I were to spend the entire Novus Ordo in prayer in this manner, it would necessitate me positively tuning out of the Mass—intentionally ignoring the liturgy.

Now it's true that in a certain sense, I was not paying attention to the Mass in this experience either, but not in the same way. I didn't have to tune out of the Mass. It was more like, the very structure of the Mass itself allowed for this particular sort of experience of it. It is as if in the Extraordinary Form, there is a hidden "low road" built into the form of the liturgy itself that allows oneself pass through it in a contemplative "mode." I'm grasping at straw trying to explain what I mean, but hopefully my meager words convey the substance of what I am getting at.

I'm not one of those people who believes the Novus Ordo is intrinsically offensive to God or impious or anything like that; but between the NO and the EF, it is crystal clear which one has a structure more conducive to prayer.
Posted by Boniface at 3:17 PM

Your experience sounds exactly like what my FSSP priests have been teaching. There is a certain quieting and ordering of the soul's faculties that needs to happen in order for contemplative prayer to happen, and the gregorian chant and overall quietness of the EF really facilitate that. Dr. Peter Kwasniewski's articles on liturgy always mention the "ascetical-mystical" purpose of the Mass, and I really wish he would unpack that phrase more because I think this is what he's getting at. In the meantime, if you ever have time to read any mystical theology by Garigou-Lagrange, you won't regret it.

The state of prayer you describe is what I normally enter even as an altar server in the ancient rite. It's not just the language or the rubrics or the music specifically, it's that the ancient & new rites contain an entirely different concept of liturgy or ritual. All the theological speak about the liturgy being an "action of the Church" or "action of Christ" is present in a real spiritual-psychological way in the ancient rite, because it's built to function in a way where the priest, servers, and even congregation just "slot in" to the boat and let the river carry them downstream; it has an automatic nature to it where the liturgy sort of plays itself out, as if it has a Mind of its own. Because the liturgy has its own Mind (which is really the Church's & Christ's Mind) it leaves the participants plenty of mental space of their own, letting their minds wander and usually in the direction of prayer and interior examination. The new rite, however, built according to the pseudo-principle of "active participation", demands the constant attention of the participants' discursive intellect, the foremost part of the rational mind; and because this foremost part of the mind is constantly being harassed in order to keep up the liturgical performance, it is not free to go on its own spiritual wanderings. Meanwhile, the intuitive or innermost parts of the mind are hardly employed at all, because the discursive mind is being so rigidly employed.

From what I know the liturgical reformers were bothered by the ancient rite's "rubricism", i.e. that it is very prescriptive in what it expects of the ministers. They thought it was "rigid". Actually it's almost the opposite, the fact that it is so "rigid" in its rubrics is what makes it so liberating, because you're not having to worry about what to do next seeing as it is hard-coded into the liturgy – you just follow along. The new rite, on the other hand, with its apparent flexibility or freedom is really rigid and binding, because it demands such "creative" input from the ministers and congregants that they are too mentally exhausted or distracted to make their own prayer. The ancient rite only feels "rigid" and "binding" when you are very lukewarm about it and would prefer not to be there; then, surely, it becomes a chore. But this is just as true in any rite or in anything in life really. It's just that this lukewarmness in the old rite manifests itself principally in the way the liturgy is rushed through, and in the new rite by the extremely casual, borderline irreverent attitude of the celebrant.

I wrote a little bit about this in respect to the Chinese concept of "wu wei" (non-doing, non-ado, inaction). I sent it to traditioninaction and you can read it here:
https://www.traditioninaction.org/Questions/B999_M079_Wue.html

Just a nobody said...

Are you all right, P?

Why wouldn't I be? Lethargic and depressed is basically my normative state 60% of the time when I come to Mass throughout my whole life.

Just a Nobody said...

deflecting questions with self-deprecating humour is my trick!

Lol...I don't know what you mean. I wasn't deflecting the question. You asked if I was alright. I said yeah, everything is normal. Also, that wasn't humor. That was deadpan serious.