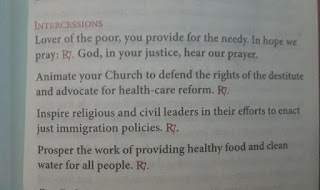 Let's talk for a moment about the part of the Novus Ordo Missae known as the "General Intercessions", or the "Universal Prayer" as it is called in the General Instruction of the Roman Missal.


The GIRM (71) entrusts the priest with regulating these prayers, essentially giving him carte blanche to conduct them as he pleases⁠—the only stipulation being that the priest introduces the intercessions and that prayers be made for the church, political authorities, the suffering, and the local community (although this structure is merely a recommendation that is "desirable" but not mandated). The prayers are to be "sober" and composed with "wise liberty" and should not be overly wordy. They may be read by anybody from anywhere—"from the ambo or from another suitable place, by the Deacon or by a cantor, a reader, or one of the lay faithful."

Because of the broad diversity allowed here, how the General Intercessions are presented can vary tremendously from parish to parish. And, as is usually the case when individuals are granted more leeway in liturgical celebrations, things tend to go awry.

The image at the top of this article was sent to me by a friend recently who noted with irritation that the General Intercessions frequently become occasions of political propagandizing. Even when they are not, they are often banally composed platitudes devoid of any sense of the majesty of the one to whom they are addressed. Often they are merely presented for merely temporal concerns without any reference to man's supernatural end. As Fr. Z used to say, they are variations of "O God, you are big. Help us to be big like you."


When I was a DRE, my pastor stuck me with the very unenviable job of composing these intercessions every week. I was a bit resentful at this; even if it had become common for lay people to read the intercessions, I always felt it was not our job to compose them. One of the most essential duties of a pastor is to lead his people in prayer; if we were using a Mass that required these prayers to be composed, it seemed to be something the priest himself ought to do himself. Still, I did my job and composed the prayers, trying as best I could to meet the demands of my pastor and the liturgy while making sure the intercessions reflected the traditional thought and vocabulary of the Church.

This made me think that there are probably many others who are in a similar situation: faithful, traditionally minded Catholic DREs or lay volunteers who find themselves having to compose the General Intercessions who may dislike the task or not be any good at it.

To that end, I took it upon myself to put together some intercessions taken from traditional sources—the prayers of various saints, bishops, and traditional devotions—that can be used during the General Intercessions in the Novus Ordo. You won't find any phrases like "encounter", "faith journey" or "parish family" in them. I've tried to include several different prayers for each of the four categories referenced in the GIRM so that these can be mixed up and used over several months. Some of the prayers I had to paraphrase or edit a bit to get them in the right format, but they are 90% unchanged.

Also, I can hear some people arguing that these prayers are "overly wordy", which the GIRM specifically suggests we avoid. To that I say...eh...whatever.

I have linked them as downloadable PDFs:


I don't like the thinking behind the General Intercessions in the Novus Ordo. I don't like the idea of the prayers for the Mass being composed willy-nilly every week by whomever. But, given that this is happening and that it is the norm in the Catholic world, maybe we can at least do it better. If you're going to do it wrong, at least do it right.

Of course, as I have said many times before, this problem and many others could all be avoided entirely by using the Traditional Latin Mass. Just saying.

Thanks for this post. I was in the same position once, and ended up composing over 50 sets of intercessions, all based off of traditional sources, of which the following is a sample:

Celebrant: Let us raise our minds and voices to the Lord as we present our petitions.
Cantor: Let us pray for the holy Church of God: that the Lord may grant her peace, unity, and good governance.
Let us pray for missionaries and for persecuted Christians everywhere: that the trials they endure may increase their faith and their glory.
Let us pray for Jews, Moslems, and all who do not believe in Christ: that by God’s mercy they may renounce their errors and cling to Him.
Let us pray for our nation, our state, and our city: that good laws and good morals may prevail over sin and corruption.
Let us pray for the members of this community: that we may seek holiness at all times and in every place.
Let us pray for our friends and benefactors: that this Oblation offered for their needs may bring them salvation.
Let us bring to the Lord in silence the intentions of our hearts.
Celebrant: O God, from whom all good things come, grant to Your suppliants that, by Your inspiration, we may think that which is right, and, by Your Providence, accomplish the same. Through Christ, Our Lord.

All of the intercessions (over 50 sets) can be downloaded at this link:
http://www.newliturgicalmovement.org/2015/05/how-can-we-elevate-quality-of-prayer-of.html

The Anglican Ordinariate's Divine Worship Missal provides five varieties of general intercessions: two are to be said by the priest alone, the other three have congregational responses (the standard "Lord, hear our prayer", or "Lord, have mercy", etc.). All five are unvarying from week to week, requiring no creativity or ad-libbing on the part of the priest.

However, in my experience, the responsorial versions are never used; the only ones I've experienced are the ones said by the priest alone. An excerpt from one of these:


Almighty and everliving, God who by thy holy Apostle hast taught us to make prayers and supplications, and to give thanks for all men: we humbly beseech thee most mercifully to receive these our prayers which we offer unto thy divine majesty, beseeching thee to inspire continually the Universal Church with the spirit of truth, unity, and concord; and grant that all they that do confess thy holy Name may agree in the truth of thy holy Word, and live in unity and godly love.

Give grace, O heavenly Father, to N., our Pope, to N. our Bishop (or to N., our Ordinary), and to all Bishops, Priests, and Deacons, that they may, both by their life and doctrine, set forth thy true and lively Word, and rightly and duly administer thy holy Sacraments....

Coming from the Novus Ordo, as we did, it was an immense relief no longer to engage in "active participation" as commonly (mis)understood, or to have to evaluate each prayer before responding.