It's not "Crucifying Your Neighbor" to Attend Mass 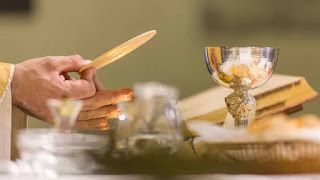 All around the country bishops are beginning to restore the celebration of public Masses. In response to this, Simcha has published an article on the question of attending these Masses while the pandemic is still going on. Her essential point is that voluntarily abstaining from Mass and Eucharist right now is an act of love for one's neighbor. Conversely, choosing to attend Mass and receive the Eucharist right now is not an act of love but an act of selfishness akin to crucifying our neighbor. It's not too long; if you want to read it you can do so here.
While I understand her concern about the vulnerable, I have some serious reservations about her line of argumentation.


First, Simcha is right that attending Mass right now involves risk. However, it always did. I have five kids and they're all germ factories. They are constantly at risk of spreading their germs to the sick and the elderly at Mass despite our precautions. Every time we get in the car to drive to Mass or elsewhere we are endangering other people's lives. Is that antithetical to love? Well, it can be, depending on the level of recklessness involved in the act of driving, but the mere act of assuming risk isn't reckless. The question that we must discern is not "does this involve risk?" but "how necessary is this risk?" "how much risk is involved?" and "what am I doing to mitigate that risk?" If you run red lights or don't wash your hands (that is, if you don't take precautions) then you've been negligent in your duty to protect those around you. You've been reckless. We have a responsibility to our neighbors not to take unnecessary risks and to mitigate risks when they are present, but we can never act completely without risk, especially in activities that are so essential to our well-being as attending Mass.
Second, like many, I was disappointed when Masses were suspended. We've gone two months without Mass and certain parts of the country may go much longer still. At the time, we were supposed to trustingly accept that our bishops were taking the necessary precautions that the situation at the time demanded. If we were supposed to trust our pastors then, are we not supposed to trust them now that those same bishops are making the decision to gradually reopen access to the Mass with precautions? Everyone should make their own discernment, but that should also involve guidance from our spiritual leaders. Simcha suggests that going to Mass right now is akin to being "willing to kill" for Jesus. It seems absurd to me to frame going to Mass as being "willing to kill for [Jesus]" when our bishops are the ones encouraging the restoration of public Masses. Essentially, you can't wag your finger and say "Trust our bishops!" when they shut Masses down but now say we should not trust them when they decide to open up.
Elsewhere, Simcha states "Take care that, when you say 'I would die for Jesus,' you don’t really mean, 'I’m willing to kill for him.'" However, if going to Mass constitutes killing people, then so does going to the grocery store to buy the food necessary to keep your family alive. I have yet to hear anyone make the argument that by going to the grocery store that we are killing people or that killing people for physical nourishment is justified (hint, it's not). Is killing people to go to Mass permissible? That's an absurd hypothetical with no basis in reality. Better questions are "How essential is Mass?", "What threshold of risk is acceptable when determining to suspend/resume Mass?" and "What precautions should we take when resuming Mass?" Our pastors have been grappling with these questions for months and, again, I want to assume that they are making the best decisions they can with the information available to them when they choose to reopen the Mass. But the essential point is that Mass is not a special circumstance; if it's "killing people" to go to Mass then it is also "killing people" to go get groceries or any of the other things we are still allowed and required to do.
Finally, Simcha seems to characterize Mass attendance as something that primarily benefits the individual but with social consequences: something that doesn't just affect only ourselves but everyone else as well. That last part is absolutely true. However, we have to be careful not to apply principles capriciously. Making the personal decision to attend Mass certainly affects those around me, but so does the decision not to attend. I have a responsibility not just to society generally but to my family specifically. The spiritual development of my children is probably the single greatest responsibility in my life. They don't really understand why we don't go to church anymore and, despite my best efforts to substitute the Mass, they don't really view it as important anymore. When discerning to attend Mass or not I have to take into account not only my own desires versus the risk to others but also the needs of my family. If I choose to wait longer than what my bishop says is necessary then I must be sure that this does not constitute a reckless neglect of my family's needs and my responsibility to them.
Two concluding thoughts: Simcha's use of sex as a corollary to attending Mass is kind of weird. I get that her point is to say "Love waits", but there is a world of difference between wanting to partake in a physical act we are biologically disposed to and the desire to attend the Holy Sacrifice of the Mass.
Also, it's interesting to reflect on all the times in history when the mere attendance at Mass put the entire congregation at risk. Ancient Rome during the persecutions. Elizabethan England. Revolutionary France. Mexico during the 1920s. Communist China. In any one of those historical circumstances, all it would have taken was one single Catholic to be captured and talk under duress to expose the entire congregation—as well as their priest—to imprisonment, torture, exile, or death. Any one parishioner assumed a very real risk, not that their fellow parishioners would get an illness from which 98% of people recover from, but that the entire congregation could be destroyed. And yet they all still came and were encouraged to do so by their pastors, who viewed the spiritual treasures of the Mass as justifying the profound risks.

Now, I certainly am in no position to tell anybody how much risk they need to be willing to take—for every Catholic who attended Mass during the Mexican persecution, there were probably five who stayed home for their safety, and that's their call. But, those who do choose to assume the risk should not be called selfish and accused of "crucifying their neighbor" because they are simply attending a religious service that their own bishops have told them it is now allowable to attend.

I also want to thank my friend Christian, whose thoughts formed the genesis of this post.
Posted by Boniface at 10:50 AM

Sounds like Simcha's got a guilty conscience. She won't attend mass because she's afraid; won't allow her children to attend mass because she's afraid. Fair enough. But rather than assuming responsibility for keeping her own children away from a mass that the Bishop has allowed, she accuses others who will attend of wanting to 'kill for Jesus.' Its the ultimate emotional manipulation using the scorned woman cry of 'If I can't have you then No one can!" (to use her strange preoccupation with sexual analogies.)

They don't have the spiritual treasures in the Mass of the 60's, like those other times in history you mentioned. It's body 1, soul 0 now. Why does she write about Catholicism.