With The Joy of Christ's First Breath 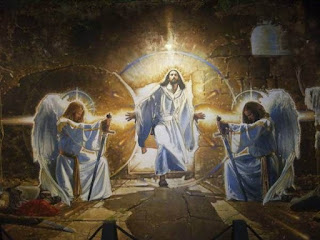 A most happy, blessed Easter to all of you who may be reading this, whether you are Catholic or not. I pray for the mercy and grace of our Lord to be with you abundantly during this holy season.
This Easter marks the 19th Easter I have celebrated as a Catholic. I remember receiving the sacred unction of Confirmation all those years ago, taking the name Francis in honor of the great saint of Assisi whose witness led me to the Church. Last night, I watched a man and a woman enter the Catholic Church at my parish's Easter Vigil. Despite everything going on in the world, despite all the darkness in the Church itself, despite the chaos in the Vatican, there were still people who heard the voice of the Bridegroom and followed Him into His chambers, seeking the ark of salvation. One of the men being confirmed even took the name Francis, just as I had all those years ago.
At the time, I was  a tad envious of those people. They were likely blissfully unaware of a whole lot of things. To use a tired cliché, they had not yet been "red pilled" to the disaster in which Catholicism currently finds itself. There are times when I wish I could take the proverbial "blue pill" and forget about it all. Go back to believing John Paul II was the greatest pope ever. To believing in the New Springtime. To thinking the documents of Vatican II were profound. To blindly attending an okay Novus Ordo and thinking it represented 2,000 years of tradition. To believing most of the bishops were good men, that scandal was due just "a few bad apples." To blaming the Church's public relations problems on media bias. To being moved to tears reading the Catechism of the Catholic Church. And yes, as I watched that man be confirmed as Francis, a part of me wished I could take a blue pill and forget it all. Does not the Proverb say "He who increases in knowledge increases in sorrow" (Prov. 3:13)?
Nevertheless, "Restore unto me the joy of thy salvation", O' Lord (Ps. 52:12); and "rejoice in the Lord always" (Php. 4:4). Even though such thoughts tempt me from time to time, I have also reflected that my spiritual life is much better now than it was then. Back then I was restless, striving, tossed about by the wind. Now I feel much more solid, more at rest, more at peace, more grounded. And it's ironic because it doesn't seem to matter what goes on in the world and the Church; in a paradoxical sense, I found more peace the worse things got. Isn't that how trials work? They compel you to let go of your worldly understanding and cleave to the Lord. To have faith in Him. They purify your attachments, teaching you to trust in God alone. That's the way it works. Who ever said these trials would not come from or through the Church itself?
Going back to St. Francis, what originally drew me to him all those years who was his radical sense of abandonment. Not just renunciation of worldly goods, but of worldly concerns. I'm sure Francis was well aware of papal corruption. Of clerical worldliness. Of priestly ineptitude. Of Christian hypocrisy. Of the darkness of the world and the power of evil. But he simply didn't focus on that. He focused on the cross of Christ, and therein he found perfect joy. Joy that enabled him to hug the leper on the road, or build San Damiano stone after stone, or talk to a wolf or a bird.
Where is faith lived out? I mean, really? There's only one possible space it can be lived out—right where you are. With the people who are right in front of you. In the circumstances you actually find yourself in. The chance to be a saint is right now. Will there be some sort of future restoration, some glorious triumph of Tradition? Who knows. But what I do know is that "now is the acceptable time of God's favor; today is the day of salvation" (2 Cor. 6:2). "Today, if you hear His voice, harden not your hearts" (Heb. 3:15). Yes, being a Catholic is hard, especially these days; some people I know have thrown in the towel. Their walk is their own. But for me, the older I get, the further I go, the more the Lord has helped me to focus on the here and now. And this has been a tremendous gift to my inner peace. I would rather be here where I am now than anywhere else.

You, too, friend. Today is your day. Have you hardened your heart? It's not that what's going on in the Church or in Rome don't matter; that stuff does matter—souls are being lost because of it, and I believe a lot of people are going to have a very heavy judgment on the Day of the Lord on account of it. It definitely is a problem, and as a Catholic it is my problem, in a sense. But in another sense, it's not, just as the corruption in Rome was not St. Francis's concern. But the leper in front of him was his concern. The avarice of some cardinal did not perturb him; the sin he discerned in his own heart did. His spiritual focus was ever trained on his own life and actions.
The great paradox, of course, is that by focusing so intensively on his own spiritual life, he did, in fact, end up reforming the Church. That was never his aim. But God did it through Him, because that's how God is.
Even though it's tempting to want the blue pill, I have realized the Gospel always gives me a way out. I don't have to choose between being naively ignorant or red pilled and cynical. Just like St. Francis, I can choose joy. I can choose the joy that is in front of me every single day, always evident to those who have eyes to see, who, by the grace of God, have made their hearts like children. I can live in the joy of the Resurrection, with the clarity and freshness and radiance of the first breath in Christ's lungs when He first stepped out of the tomb. Ah, what a joyful breath that must have been!
May that be my joy—the joy of Christ's first breath. The joy that is complete, that no man can taketh. And may it be yours as well.
Posted by Boniface at 6:50 PM

Happy Easter to you Boniface.