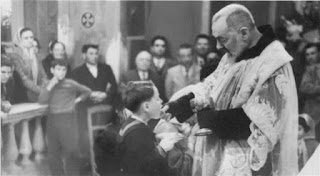 It was 2001. I was a non-denominational Protestant bouncing around various house churches and charismatic fellowships. Through various pathways I had discovered Catholicism, the faith into which I  had actually been baptized as a child but never received catechesis or sacraments. I was reading some Scott Hahn books and had attended a few daily Masses. And I was starting to read about the Eucharist, beginning to study the Real Presence of Jesus and the graces available through the Blessed Sacrament. Over the months, my heart gradually began to burn with desire for Christ in the Eucharist.
One day for work I was passing through the affluent Michigan suburb of Farmington Hills, Archdiocese of Detroit. The marquis outside said that daily Mass was about to be offered, so I decided to go in. It was what I recognize now as a very generic post-conciliar Novus Ordo parish: Built in the circular like an amphitheater, featuring absurdist nouvueau stained glass images, a table altar centered on a sanctuary that looked like a performing arts stage, and a gargantuan baptismal font with adult-sized immersion pool and running waterfall for ambient noise. Gray carpet. And lots of lush plants, the kind you see in the hallways of big office buildings.
But I was too much of a noob to notice or care about any of those things; in fact, at the time, I remember I liked the décor and found aesthetic of the water to be soothing and peaceful. But anyhow, the Mass began, offered by the parish priest—a tall, slender man in his late forties. There was little enthusiasm in his homily, which I recall was rather lackluster in performance and milquetoast in content. That didn't seem to matter either though, for when he got to the Eucharistic liturgy I was on the edge of my seat. I wanted Jesus so bad. It did not matter that it was Eucharistic Prayer 2 of the Pauline Mass. My understanding of what was unfolding before cut through all that garbage like a katana and tore the fabric separating me from the divine. My soul was ablaze.
When the priest distributed communion, I made the well-intentioned but poor decision to go up and receive the Eucharist anyways. I was not ignorant of the rules of the Church—I already knew one was supposed to be a Catholic in a state of grace in order to receive. I don't remember how I rationalized it, but I do recall that it was motivated by the sincerest desire to possess what every Catholic had but many seemed to take for granted.
So I got in line and received Holy Communion sacrilegiously from the priest. I felt deeply touched by the reality of what I had received, but I also immediately knew that what I had done was wrong. I was panged by guilt, and skulked out immediately after the final blessing.
Some time later, I entered RCIA and was preparing to be brought into full communion with the Church. I had made my first confession, at which I confessed the sacrilegious communion. Because it was a general confession, this sin was buried in about two million other things I was confessing and didn't get any particular attention. I knew it was forgiven, but I felt like that was not enough. I wanted to go back to that parish, meet the priest, explain to him what happened, and then apologize personally. So, one day I drove the hour from my house back out to Farmington Hills to the affluent yuppie parish so I could sit down with the priest and tell him from my heart that I was sorry. I wanted to make some kind of special atonement. I wanted him to see my contrition, accept my apology, and give me some words of consolation. Maybe, in my newly converted pride, I wanted him to see what a spiritually sensitive soul I was and commend me for my actions.
I walked into the "Administrative Office." It was very much like walking in to the waiting area of a dentist office. A frumpy, middle aged woman sat behind her desk, separated from me by a barrier of plexiglass that was two decades ahead of Covid. I immediately felt awkward and out of place. She saw me approach and slid open the plexiglass window, asked if I needed any assistance—not needed assistance in the sense of "can I help you", but needed assistance in the sense of "Do I need to put you in contact with our local Vincent de Paul chapter?" I guess I gave out that vibe at the time, which I can sorta understand.

I asked if I could speak with the pastor. I had looked up his name on the parish website and knew who I needed to talk to. She asked what it was about. I had not anticipated this question; I didn't know what to say, and I certainly wasn't going to fess up about my sacrilegious communion to this gate-keeper. So I awkwardly said, "I just need to tell him something." She looked at me with extreme skepticism, as if I had come only to steal and kill and destroy. She seemed extremely irritated by my presence. She told me curtly, "Father doesn't see anyone without an appointment. You'll have to make an appointment." Dejected and feeling extremely awkward, I said "Alright" and walked away without making an appointment.

I was thinking about this episode today because I was reading the life of St. Padre Pio, and I came across the following story about Padre Pio and some young boys he was giving spiritual direction to:

Another time, taking the boys on a walk, he appeared very serious and sorrowful. The boys gathered around him and insisted that he tell them what was the matter. Padre Pio broke into tears as he said, "One of you has stabbed me in the heart." The boys were deeply shaken and ventured to ask for an explanation. Very sorrowfully, Padre Pio said, "Just this morning one of you made a sacrilegious Communion! And to think! I was the very one that gave him Holy Communion during Mass." Immediately one of the boys fell on his knees in tears and said, "I was the one." Padre Pio had him get up on his feet and made the others go some distance away while he heard the boy's confession" (Padre Pio the Wonderworker, Franciscan Friars of the Immaculate, New Bedford, MA., 1999, pg. 24-25).

I wish I wouldn't have made a sacrilegious communion, but I also wish I could have had something like that when confessing it. Something that at least acknowledged the supernatural reality of the matter.

Very honest, Boniface. I confessed something in a general confession that I had probably confessed at some point years ago, but not sure I recognized the full gravity of the sin. It seared on the tongue coming out, but man, the mercy of Christ. Thanks for posting. You might be interested in this post I just wrote on the pain of mortal sin: https://fatherofthefamily.blogspot.com/2021/06/the-pain-of-mortal-sin.html