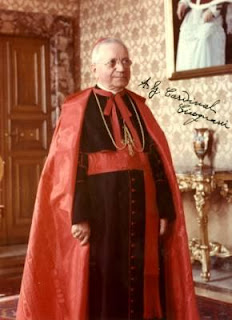 The weeks since the promulgation of Traditionis Custodes have seen various efforts to formulate a canonical response to the document to allow maximum freedom in its implementation.
Most traditional apologists have latched onto Canon 87, section 1 of the Code of Canon Law, which says that "A diocesan bishop, whenever he judges that a dispensation will contribute to their spiritual good, is able to dispense the faithful from universal and particular disciplinary laws issued for his territory or his subjects by the supreme authority of the Church." Bishop Thomas Paprocki of Springfield, Illinois invoked this canon in his dispensation from the provision of Traditionis Custdoes.
There is another approach, however, and this is the canonical principle of dissimulation. Whereas dispensation is the exemption from the obligation of the law in certain cases, dissimulation is the non-enforcement of the law in circumstances where enforcing the obligation would cause greater problems than non-enforcement. Dissimulation is an option for the bishop to simply not enforce the law.
If we consult the magnum opus of the great 20th century canonist Amleto Cardinal Cicognani (1883-1973), Canon Law: Commentary on Book One of the New Code (1935), we find a section on canonical dissimulation. Cardinal Cicognani says:

A distinction should also be made between dispensation and dissimulation, whereby a superior, without removing the law's obligation, permits its transgression to go unpunished that greater evils may be avoided. Dissimulation is a true juridic procedure, as may be gathered from the numerous canonical documents, wherein it is stated: "dissimules", or "dissimulare poteris" (you may dissimulate). For in some cases it is very difficult, or even impossible, to enforce a law, and to dispense from it is inexpedient or impossible because the superior lacks the necessary power. Hence at times it is expedient for the superior to dissimulate, to assume a passive attitude—which is permissible even in matters that concern natural or divine law—from which no precedent is established; however, the superior, because of his dissimulation, can take no action in the external forum against transgressors, nor are invalid acts avoided officially.
Connivance or dissimulation is frequently confused with toleration. They differ in this respect, that connivance is a feigned ignorance of transgressions of the law in order that measures may not be taken against them; whereas toleration not only feigns ignorance but grants the transgressor complete liberty of action and freedom to continue. Hence toleration is not employed in matters that are contrary to faith and morals, and with respect to acts that are patently invalid. Furthermore, toleration settles the point at issue by a "tolerari potest" decree, whereas connivance (dissimulation) can be nothing more than a temporary measure. [Cardinal Amleto Cicognani, Canon Law, 2nd ed (Dolphin Press, Philadelphia, 1935), pg. 830-831]

There are a few takeaways here:

First, dissimulation is a "true juridic procedure". That is, it is a legitimate canonical response to a law, not a mere shirking of duty or abdication of responsibility.

Second, dissimulation is appropriate in situations where it is better to permit a transgression to go unpunished "that greater evils may be avoided."

Third, it is permissible "even in matters that concern natural or divine law."

Fourth, though Cicognani's book was written with reference to the 1917 code, he is not here addressing the text of any specific canon; rather, he is explaining a legislative principle that is found throughout the Church's canonical tradition. It would certainly still be applicable today under the 1983 code.

There is a strong argument that the principles of canonical dissimulation apply in the case of Traditionis Custodes. In the weeks since the document's promulgation, there has been a surprisingly resounding chorus or protest against the hubris, overreach, and cruelty of the document. Even liberals, non-Christians, and atheists have gone on record saying the motu proprio is unnecessarily harsh (a roundup of notable responses to Traditionis Custodes can be found on New Liturgical Movement). The majority of bishops globally seem to believe the implementation of the motu proprio would be problematic, as evidenced by the vast majority of bishops choosing to avoid enforcing the document. As of August 1, 2021, the status of the Traditional Latin Mass globally is as follows: 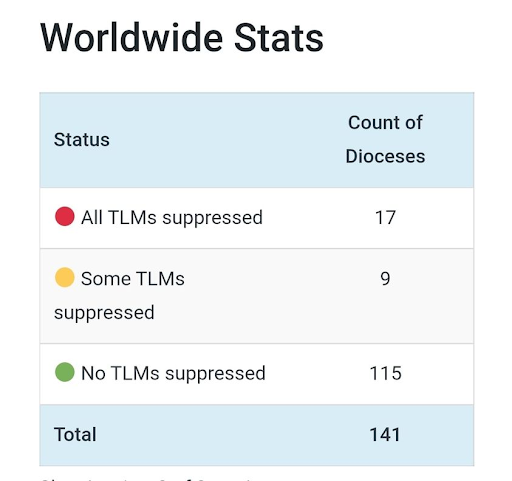 It is still early and many of these responses are provisional, but they clearly evidence that the global episcopacy is not keen on enforcement. The chaos it could cause amongst traditional communities within a diocese, the multiplication of ill will, the logistical difficulties of relocating peaceful traditional communities, and the horrific canonical confusion of the document itself—not to mention the radical curbing of episcopal autonomy— create a disaster that bishops find best avoided. This seems like a prime case where dissimulation would apply.

Note that it can be permissible "even in matters that concern natural or divine law", so the Sacred Liturgy would certainly fall within that purview.

When would dissimulation be a better approach than dispensation? Perhaps in situations where a bishop, for reasons of Church politics, wishes to avoid enforcing the document but also does not want to "go on record" as opposing the pope. It would also be ideal in situations where too much time has elapsed for the "we're studying the document" is no longer believable.
Ultimately, the bottom line is that canon law contains an option for bishops to say, "This would be a shit show if I enforced it. I'll pass." I do not say this would be a better strategy than dispensation in the long run, but it is another strategy. And we need to be aware of every tool we have at our disposal.
Posted by Boniface at 10:43 AM

Dispensation spares the conscience of the priests and lay people, but dissimulation seems to place the burden of obedience upon the individual.

At least that is one way of looking at it. I suppose if you consider the Motu as directed at the bishops, then there is no moral burden upon the people unless the bishop should choose to enforce it. But from that point of view, if the bishop does give a dispensation, who is he dispensing. Himself? What a confusing document.

I am not sure how dissimulation puts any burden on the faithful. The faithful do not dissimulate, it is the bishop who chooses to dissimulate by not enforcing the law. But good points nonetheless!