My First Christmas as a Christian 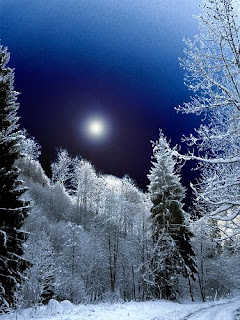 This December I have been remembering my first Christmas as a Christian. It was Christmas of 1999. I had only come to Christ scarcely two months earlier. What a whirlwind those early days of faith were! It reminds me of the passage about the scales falling from St. Paul's eyes. Finding Christ—or rather being found by Him—was like having my mind flooded with light, the ground of my being shaken, and seeing life anew. Sometimes I felt like I was gazing out upon creation as if I were the first man, Adam looking upon a new world fresh from the hands of its maker, the breath of God still in his lungs.

When Christmas came that year, I was profoundly aware that it would henceforth take on a new meaning for me. For twenty years I had celebrated Christmas with my family according to secular custom: vaguely aware of its commemoration of the birth of Christ but primarily as a holiday about Santa Claus, family, and gift giving. But even as a child I'd always felt something special about Christmas, especially Christmas Eve. It seemed like a charmed night, a night where the wonder and magic of the old days lived and walked again.

After I had embraced Christ, I realized that, in a certain sense, that year would be my first "real" Christmas. It would be the first time observing the birth of Christ as a brother in Christ. This realization overwhelmed me with gratitude for the holy day I had grown up with but only then begun to understand. Knowing who Jesus Christ is and what He means enriched the celebration of His birth in ways I'd never appreciated. But how would this new realization change my celebration? How would I observe Christmas differently?
This was tricky. I was still living at home and thus how the day was observed was going to very much depend on my parents, who were secular. Furthermore, I had not yet revealed my conversion to them. They knew I was acting a bit differently, but I had not yet figured out how or when to tell them. My conversion was still very new, and I did not want to "cast my pearls before swine", as our Lord said. I believed if I told them of my conversion too soon they would not take me seriously or mock my sudden piety after years of heathenism. So I didn't feel like I could make any requests of them to celebrate any differently.
In the end, the one tangible thing I did was I got my own little Christmas tree. My parents had the large family tree downstairs, but I had this small artificial tree, about two feet tall, that I had previously had in an apartment. I set the tree up upstairs on a table in my parent's sitting room and decorated it with the few ornaments I possessed of my own. When Christmas Eve came, I spent a lot of time up in that room on my knees before the little tree in prayer. I was not yet Catholic, so it had not occurred to me that going to church was fitting for the night. But I at least had enough Christian sense to know I should be praying.
It was snowy that Christmas Eve, but not snowing. It had snowed hard the day before; this night it was peaceful. The land was blanketed in about a foot. The sky was bright and clear, illumined by a moon almost full. The Michigan countryside about was silent, the pine branches, weighted down with snow, drooped. The snow was immaculate, untouched save for the occasional rabbit track. It shone white and twinkled like crystal in the moonlight.  Beams of pale moonlight streamed into the windows of the room and fell on the carpeted floor. I knelt there in the moonlight, before the little Christmas tree, with my arms spread in the ancient orans posture (though I knew neither the name of the posture nor its antiquity).

I again had that sense that this of newness...as is if this was the first night. The countryside draped in freshly fallen gave a feeling of purity, of cleansing, of freshness. The light of the moon streaming into the window seemed to me like the light of the Star of Bethlehem. I don't recall what I was praying about that Christmas Eve; but I remember vividly how I felt. I felt like that Christmas was the first Christmas. I felt like Christ was being born right then, as if I were a witness alongside the shepherds and animals of the stable. It was such a tender sentiment...I was so new in faith, and in a very real way, Christ was being born in me at the time as well. Everything I saw on the outside seemed to reflect the reality I recognized on the inside.

I've never had a Christmas quite like that one. It's been hard to recapture that. I had no worldly cares that year. I was just living at my parents, not married, no kids, no girlfriend, just a low maintenance gas station job. I was completely unencumbered. Then, gradually, year after year, life closed in on me. To some degree, there's a paradox where the busyness of preparing for a holiday can obstruct one from actually entering into the spirit of the holiday. Too many Christmases since have been marred this way. I suppose it's just part of dealing with holidays with a large family, kids, and so on.

But, ah, one day when I am old and my face is weathered and my hands are cracked with the rigors of age, and I am closer to my life's end than its beginning, I hope again to come to the feast of the birth of our Lord with nothing save my piety, kneeling in the moonlight of a midwinter's night.
Posted by Boniface at 12:53 AM

I love these kinds of reflections, thanks for sharing Boniface. I came into the Church around the same time of year, right before Christmas in 1998, at the age of 18. The greatest gift of all for Christmas...is the gift of our faith. Reminds me of a post I wrote thinking about it myself:

"The excitement of a pure-hearted convert is contagious. "Did you know that the rosary is really a meditation on Scripture? Did you know that baptism washes away Original Sin? Wow!" Yes, we know. We know intellectually, and we know from reading the Catechism. We may have known for years, or even all our life. But we know it on a surface level, because we have forgotten the basics.

That is why to attain a beginner's heart, we cannot forget. When our prayer becomes rote and our spirit tired, the "diaper days" of a baby Christian can be our memorial altars where we observe that God is still working in His people to bring about salvation for all mankind. We can share in their fundamental joy and wonder by stripping off our airs and simply sitting at the feet of Christ in prayer and adoration, as a child sits at her's mother's feet listening to her read.

We can drink for the first time again, hear for the first time again we may have heard thousands of time before. Because the scriptures as living Word, and the Eucharist as the Living Bread, does not grow stale or mold but has the power to renew even the most accustomed spirit, we can become babes again, be born again, over and over. It is not our bodies that reincarnate in future lives, but our heart and spirit that regenerate in this life to prepare us for our Judgement when we will no longer see through a glass darkly, but will know even we are known (1 Cor 13:12), and sit before the Judge stripped naked as the day we were born."