The Extinction of Steubenville and the Future of American Catholicism 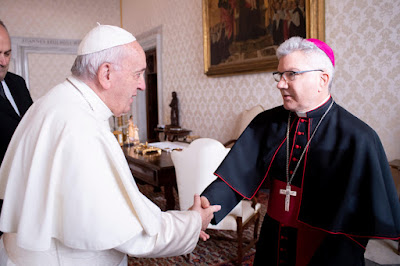 Per canon law, only the pope can merge or notably alter a diocese (Can. 373 et al); Bishop Monforton has stated that the Vatican is involved in the merger. The merger is also being described as "extinctive," which means the Diocese of Steubenville will  cease to exist. The 13 counties that currently comprise the diocese will all be folded back into the Diocese of Columbus. Priests ordained in Steubenville who vowed to give their lives to the church in Steubenville will now be priests of Columbus.

As one might expect from the machinations of the modern episcopacy, Bishop Monforton has been less than transparent about how this decision was arrived at. Consider the following:

This is the sad reality many of us will deal with within our lifetimes—not merely the closure of a school or cluster of a parish, but the extinction of an entire diocese executed by episcopal fiat. You can be sure that the change will not be merely administrative, consisting only of scratching out Steubenville on a map and writing Columbus over it. The merger will have profound ramifications on the spiritual life of Catholics in Steubenville. Columbus might not have the same level of decline as Steubenville, but it is certainly not free of its own demographic issues. As soon as Steubenville is folded into Columbus, no doubt Archbishop Schnurr or his successor will immediately conduct some sort of inventory of all of their newly acquired territory and infrastructure. There will be meetings and "listening sessions"—sessions of the same sort that a corporation holds in a company they have just acquired to see whose jobs they can cut.
Afterwards, there will be some new initiative announced. It will have some schmaltzy, saccharine name concocted by a marketing firm, something like "The Way Forward" or "On the Road Together." These names, of course, will be shells hiding the fact that the program's purpose is to dissect the corpse of Steubenville. Like Orwell's Ministry of Truth, the program's true nature will be the opposite of its nomenclature.

Then the closures will hit. Columbus, with its own limited assets, will not wish to extend its already stretched resources to maintain the parish infrastructure in east Ohio. Even the assumption of the entire presbyterate and property of Steubenville will not furnish Columbus with what it needs. If Bishop Monforton says that the Diocese of Steubenville does not have the resources it needs to continue now, it follows that handing those resources over to Columbus won't solve the problem. Columbus will need to either allocate more priests and funding to its newly acquired possessions (which it won't), or start cutting. There will be more closures, clusters, and mergers. But since Steubenville already has such a small Catholic population, the closures will hit especially hard. Families who already drive 45 minutes to Mass will now drive an hour and a half. More duties will be farmed out to permanent deacons, lay administrators, and parish councils. Priests will have less personal involvement with their parishioners as they constantly drive between multiple parishes scattered about the countryside, having no place to lay their head. Confessions will be challenging to come by. Counseling or spiritual direction from a priest will be nigh on impossible; these "functions" will be delegated to "certified" spiritual directors (mostly middle aged women) who fancy themselves spiritual masters because they passed a diocese training course.

I don't know what the status of the Traditional Latin Mass is in Steubenville, but this certainly can't bode well for it, simply in terms of the availability of venues.

This is the future of Catholicism in much of America. And while the reform of the Conciliar era and the dismantling of Catholic tradition certainly holds much of the blame here, it is not the sole culprit. Eastern Catholic and Orthodox communities in America—who maintained their ancient rites and had no "Vatican II moment"—are seeing similar demographic declines to we Catholics. It is more deeply rooted than the changes of Vatican II. The conciliar reforms have merely exacerbated something far more destructive and insidious; like Gmork aiding the Nothing in The Neverending Story, they are not ultimately responsible for the loss of faith but are accelerating it through their collaboration with the spirit of modernity.

Will you keep faith? I believe you will. But will you maintain your peace? Will you maintain joy? Will you radiate the love of Christ as you drive two hours one way to receive Holy Communion once a month? These will be tough times for all of us. May they only serve to heighten our faith, strengthen our resolve, and nourish our charity.
As for Steubenville, there are two websites I'd like to draw your attention to if you'd like to learn more about this issue: The first is Save the Diocese of Steubenville, a very informative site run by Tom Crowe with plenty of articles. I would characterize Mr. Crowe's site as investigative, providing oversight, commentary, and criticism of the process which, thus far, has been far from transparent. The second site is United Voices in Defense of the Diocese of Steubenville. United Voices is more of an activist site dedicated to using all available canonical means to preserving the diocese.
Posted by Boniface at 11:52 PM

Love the Neverending Story reference. Father Ripperger has a talk on YouTube, from 2017, on Our Lady’s view of our times. Father states that it is imperative we overcome our faults and stop committing mortal sins because we are coming in to a period where, like you say here, a priest isn’t going to be so easy to find for Confession. Thanks for the timely post.

Yes we are headed for tougher times, surely. These times are already hard, and it is likely they will get much harder. For our part, we have already pretty much adjusted to life without a "church". Francis jettisoned the actual Catholic Church some years ago, bringing it to a beautifully obvious climax in 2019, when he worshiped a demon idol over the bones of St. Peter, bringing on a Covid calamity for the world only a few weeks later.
The church, as we knew it, is now in the TLM, which as we see, they are crushing as best they can. They cannot eliminate it, of course, but they can hurt it and cause pain and inconvenience to Catholics, which they are interested in doing. Steubanville, as far as I know, had it's heyday in the 90's or so, when it was a center of "conservative" Catholicism, which as we have found out, is an ethereal concept, mostly hollow. It's TLM or nothing baby, in reality. But Steubanville has the "stink" of tradition around it, and so, it must go. By go, I mean, it deserves a visitation, better known as a detonation, of anything traditional in it. It's been done far and wide. The men who run the church do not see any need for actual "dialogue" with the pleebs, no matter how much they talk about talking, they don't actually want to talk. They want to tell YOU what THEY have decided, and THEY will "listen" as long as YOU say the things THEY want to hear.
It's all over but the crying, but do fight on. Regardless, Catholics with a traditional mindset should be realizing there may be wide gaps of time we do not have access to a priest, confession, the Holy Mass. Plan accordingly, buy purchasing materials, maybe for a Home Mass in case a priest is found, who will say the Latin Rite, the only authentic rite of the Catholic Church. As much as we need the Mass, it is Christ who is our Lifeboat, and we only must certainly make sure we cling to Him.

Wow, the news thatThe Diocese of Steubenville May soon be extinct is not being taken very well by the faithful of our Diocese. The Steubenville ,Ohio weekly mass count has to be-the highest in-our Diocese with at least 5 well-attended churches within the city limits ,plus Mingo and Toronto churches, plus all masses at the Franciscan University. The yearly DIOCESAN CAMPAIGN is a large money maker. And there seems to be a good group of clergy. The churches are well served with outreach ministries in most. The catholic schools are well equipped with good programs, and teachers. The students out perform public school students in Most cases. So what then is the reason we are losing our Long-serving Diocese.? There seems to be a lot of unanswered questions. Every article out there is vague and just indicates the decision was made for this merger, before asking the faithful first. Hopefully, our local parishioners can have a part in the final decision; because they obviously were not part of the preliminary step to get the ball rolling to delete The Diocese of Steubenville permanently.

The Bishop of Columbus celebrated the TLM weekly as a parish priest in Cincinnati, Ohio. I think people need not worry about the TLM's existence in his diocese and his future territories if Steubenville is amalgamated to Columbus. +Fernandes is a good man.