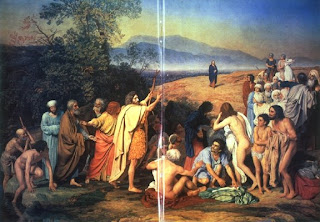 "The Appearing of the Messiah" by Alexandr Ivanov
It is a simple linguistic fact that Latin does not contain a word for the English definite article "the." So in the Latin language, there is really no way to say "the book," for it is simply translated as liber. The concept of the definite article is implied in the word, and Latin certain has many other means of distinguishing the particular book from books in general (as anyone knows who has ever had Latin and had to memorize all the hic, haec, hoc and iste, ista, istud). But there is no separate word for "the." Therefore, I suppose technically it is perfectly acceptable to render the Latin phrase Jesum Christum in the Mass as "Jesus the Christ" since the word "the" is often implied in the Latin even though there is no separate word for it there.

People fond of saying Jesus the Christ like to point out that Christ is not Jesus' last name, and therefore should not be used as such, and that it actually means "Anointed One," the Greek word for the Hebrew term Messiah. That may be true, but St. Paul does not shirk away from simply using the phrase "Jesus Christ" for the name of our Lord in Greek, and unlike Latin, Greek does have the definite article "the." But St. Paul still chooses to refer to Jesus as Jesus Christ, or sometimes Christ Jesus, even though he could have said "Jesus the Christ."

There is nothing explicitly implied theologically by saying Jesus the Christ. Jesus is in fact the Christ, and I'm certainly not about to deny this. But I have noticed that the term "Jesus the Christ" seems to be the preference in parishes of a more progressive bent, and that some priests use it exclusively. I was at a Mass last weekend (not in my parish, by the way) in which the priest referred only to "Jesus the Christ" in the liturgy and even during the homily only used this term. The traditional "Jesus Christ" was never used once. It just felt weird.

Here's why I think perhaps we should restrict ourselves from overusing this term. The traditional rendering "Jesus Christ" seems to better preserve the reality of the hypostatic union: the Anointed One, the Christ, is none other than the man Jesus of Nazareth. The Christ that comes from the Father is the same one born of a virgin in Bethlehem. Though of course we all realize that Christ is not Jesus' last name, it helps us to better speak of the mystery that the Christ the Word of God is essentially what the Man Jesus is. Just like when we say "Saint Francis" (instead of Francis the Saint), we are asserting that sanctity is the preeminent aspect of Francis' character that we are recalling.

Now, saying "Jesus the Christ" does not deny any of this. However, I think this phrase does have a few undesireable aspects to it. Fundamentally, it separates the person of Jesus of Nazareth from the Messiah, even if only linguistically. It makes it sound like "Messiah" is an office that Jesus fulfills rather than something that He is. If this term were used exclusively, like I heard last weekend in Mass, people could get an adoptionist view of Jesus. Based on overuse of "Jesus the Christ," it could come to be perceived that the Christ was something Jesus became or that it was just an office he filled, just like when we say Isaiah the prophet. But Jesus is not "the Christ" in the same way that Isaiah can be called "the prophet." There was a time when Isaiah was not a prophet, and we can ontologically distinguish his office as a prophet from his personhood. But no such distinction is possible with Jesus, Who was the Christ from the moment of His conception just as He was the Word from all eternity. There is no Jesus without the Christ.

I think the key is archaeologism. Saying Jesus the Christ reminds people that Jesus is indeed the Christ, and that the Christ is the Jewish Messiah. Thus, when I hear "Jesus the Christ," I think this calls to mind the idea of the Jewish Messiah more clearly than the traditional Catholic formula "Jesus Christ." By calling up the idea of the Jewish Messiah, I think the notion is to get back to the way the "Early Church" would have thought of Jesus (I put that in quotations because progressive notions of the Early Church or often out of wack). Thus, I think using "Jesus the Christ" is an archaeologistic term that attempts to try to get past the "medieval accretions" (remember, the English "Jesus Christ" is the rendering of the Latin Jesum Christum). These same people who love saying "Jesus the Christ" are the same ones who love to refer to God as Yahweh because that's how they did it in ancient Israel (oh, except for the fact that nobody ever said that name because it was way too holy). By the way, the Vatican has disapproved of the use of "Yahweh" in liturgical songs, thank God!

In the end, though the term itself is not errant, I think the too frequent use of it calls to mind a false vision of what Catholicism is: an organization of God's people that fell from its pristine and apostolic simplicity into the errors and superstitions of the Middle Ages and which now needs to be cleansed from these accumulated traditions (like saying "Jesus Christ"). I'm sure nobody intentionally thinks this when they say Jesus the Christ, and I sometimes will use this phrase when I am teaching if I mean to emphasize Christ as the Messiah. But there is something weird and a little disturbing about only using this phrase, and I think it ought to be generally avoided - especially if the liturgy calls for the traditional formula "Jesus Christ."

Is there any substance here or am I making much ado about nothing?

By the way, for something amusing, do a Google search for the phrase "The Messiah" and notice in the Images and on the Web how quick Obama comes up.
Posted by Boniface at 7:51 AM

There is substance, and IMHO, perhaps an unnecessary concern.

The Jewish messiah is richly described, announced, predicted, etc in the OT. They anticipated "the" Messiah..... a quality of the Lord, not just a title.

Simon, at the presentation, lifted Jesus high and announced "...I have seen the salvation...."

The "quality" of Whom they lift is not diminished by the words used. Messiah, I think, is enhanced if understood to be also an adjective, not simply a separate noun.

Respectively, in the name of Jesus the Christ,

I know a priest who says "Jesus, the Christ" in the liturgy (instead of "Jesus Christ" where it's written). I doubt he does so for any reason apart from that he likes the sound of it.

But I understand your concern, because one could attempt to separate (if it were possible) Jesus "the Christ" from Jesus "the man".

"Jesus Christ" is a clearer sign how the Person Jesus and the office or title of "Christ" subsist in one another! :)