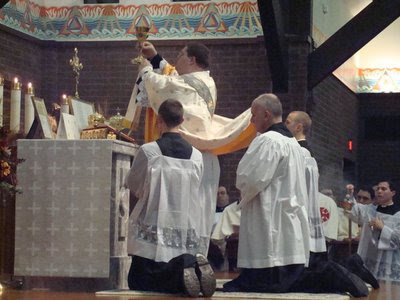 This really got me thinking, mainly along three lines:

1) Do we know with certainty that St. Hippolytus wrote this prayer?

2) Is is automatically better because it is older?

3) Is Prayer #2 in fact older than the Roman Canon?

First, did St. Hippolytus write this prayer? Well, of course, though Hippolytus was a saint by virtue of his martyrdom, we have to keep in mind that he was also an antipope. Even if Eucharistic Prayer #2 was written by him, I think this fact ought to put it a little below the Roman Canon. But was this prayer composed by Hippolytus?

Fr. Finigan at "The Hermeneutic of Continuity" explains that the connection of Eucharistic Prayer #2 and Hippolytus is tenuous: It is known that St. Hippolytus (d. 256) wrote a lost work entitled "Apostolic Traditions." In the the late 19th century, some documents were discovered which some purported to be the lost work of Hippolytus. This was the consenus in the post-Conciliar times, but it has since been questioned since the authorship and date of the work remains unknown. Fr. Finigan says:

We need therefore to be careful about asserting too readily that the "Apostolic Tradition" is Roman, that it is our earliest liturgical source, that it is by Hippolytus and so on. The origin, authorship and dating of the document is not established with the certainty that would enable us to draw safe conclusions as a solid basis for practical liturgical proposals (source).

Therefore, while it is possible that Eucharistic Prayer #2 may have been based on the writings of Hippolytus, we cannot say with anythign like certainty that this is in fact the case.
Point two: even if it were by Hippolytus, is the fact that it is "older" than the Roman Canon make it better? No, because we do not base our liturgies on the errant notion of archaeologism. If older were always better, we would do the Mass in Aramaic or Greek. Older is not always better, just like newer is not always better. What is best is, as Pius XII tells us in Mediator Dei, a liturgy that respects and contains within it the organic development of the Church's tradition throughout the centuries. Pius said that it is:

"obviously unwise and mistaken is the zeal of one who in matters liturgical would go back to the rites and usage of antiquity, discarding the new patterns introduced by disposition of divine Providence to meet the changes of circumstances and situation" (MD, 63).

But finally, this all begs the question: granted that Eucharistic Prayer #2 comes from the early 3rd century, would it in fact be older than the Roman Canon? I am assuming the person who said this was thinking of the Roman Canon as dating from the time of Gregory the Great (590-604). Of course, the Roman Canon did not begin with Gregory but was codified by him. Gregory himself stated that the canon had been already possessed and arranged in the same order for centuries and was himself unsure who wrote it (Epp., lib. VII, no. lxiv, also lib. IX, no. xii). We see St. Ambrose making a definitive reference to the Roman Canon and bits of the Roman Canon are quoted in the pre-Nicene Fathers. Going even further, some have examined the textual similarities between the Roman Canon and the Epistles of St. Peter and concluded that some of the Roman Canon may have been composed by St. Peter himself (Fr. Ripperger is of this opinion, I believe). Addition evidence to this effect is that in ancient Greek translations of the Roman Canon, the liturgy is referred to as "The Liturgy of St. Peter."

I do not think Eucharistic Prayer # 2 is in fact written by Hippolytus, but even if it were, there is no evidence that it is older than the Roman Canon. The Roman Canon is at least as old, if not older. But this is a moot point, since we do not just strive to go back as old as we can, but to celebrate the liturgy in a manner that is organic and preserves all of the traditions of the past.
Posted by Boniface at 3:31 PM

It's clear from the text of the Apostolic Tradition of Hippolytus (or whoever actually wrote it) that the Eucharistic prayer contained in it that E.P. II is closely based is A) a prayer used only by a Bishop at the Mass of his ordination, and B) only a MODEL or EXAMPLE of the prayer to be used, and not necessarily a word-for-word text to adhere to.