The "complexities" of the episcopacy 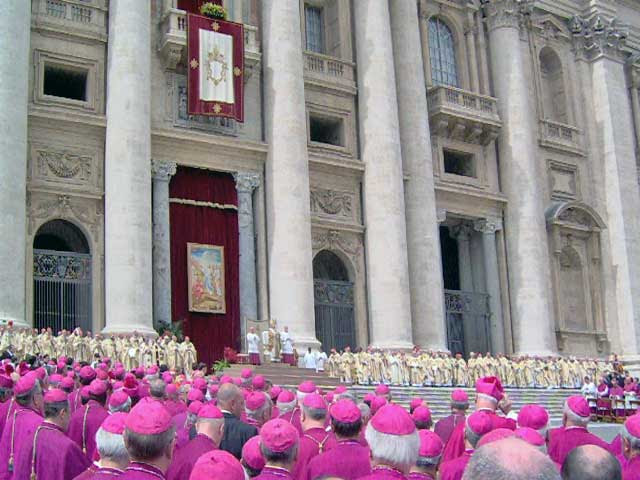 I am currently watching the drama unfold around the alleged comments made by Cardinal Schönborn yesterday on the need of the Church to grant lasting gay relationships "more respect", to "reconsider" its position on re-married divorcees and on his uncertainty as to whether celibacy leads to sexual deviance in the priesthood. I am not going to comment on Schönborn's remarks now, since I am allowing some time to elapse for the possibility that he may have been misquoted, or wants to clarify his statements. I will get back to this in a few days when everything has had time to come to the surface and when we can verify that the Cardinal did in fact say these things (see here).

Like the case with the Iraq War, Catholics need to realize that a lot of bishops who we thought were so intellectual and complex could really just be cowards who have no clue what they are doing or what they ought to be doing. If they repeatedly say or do incompetent things, could we infer they may be incompetent?  You know the old saying about "If it walks like a duck and quacks like a duck..." We ought to face up to this possibility. I'm not calling out anybody by name, nor am I standing in judgment here. I'm condemning nobody; but I am making the simple observation that any bishop who refuses to state the plain truth when he has the opportunity and the duty is a coward and I don't think there is anything wrong with pointing this out.

Do I believe this about Cardinal Schönborn? As I said in the beginning, I am not making any statement on Cardinal Schönborn's words until more information comes out, and nothing I have said in this post is with reference to any specific bishop or cardinal. But I do believe there are quite a few cardinals and bishops who fit this mold; men who would abandon the clear teaching of the Faith as soon as it becomes socially unacceptable to profess it anymore, as soon as the "strain" gets to them. But if they are the type of people who do indeed buckle or disseminate under strain, why are they in the episcopacy? And why do we make excuses for them?

I truly hope that Cardinal Schönborn was misquoted, taken out of context, or that this whole thing is a lie. We'll see, but judging from what I've seen of the Cardinal in the past few years, I would not be surprised if this whole thing is completely true.
Posted by Boniface at 10:45 PM