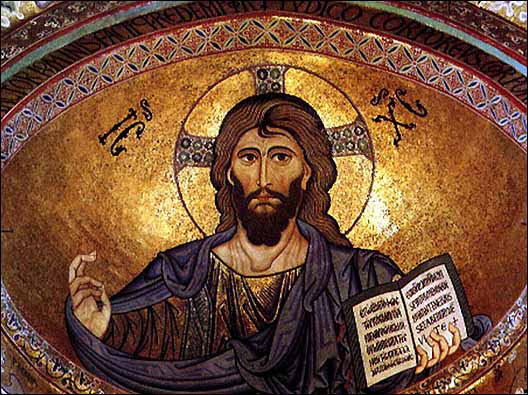 I hope you all can help me out with something. I've decided to go through my 2005 thesis on sacral kingship that I wrote at Ave and clean it up a bit, perhaps make it more scholarly and worthy of publication at some point in the future.
To this end, I have decided to post the whole 95 page thesis on this blog, but only piece by piece. Every now and then I'm going to throw up a chapter for your perusal. Please let me know if you think anything could be added, certain points made stronger, certain arguments that are too weak, etc. Basically, I'm just looking for feedback.
Below is the introduction, explaining the concept of the paper and setting out the scope of the project. It was written in the Spring of 2005, so I hope it doesn't sound to juvenile. But that is the sort of thing I am wanting to tweak. Citations can be found at the bottom of the post. Enjoy.

Power from on High
Theocratic Kingship from Constantine to the Reformation

Footnotes
1 Dante Alighieri, The Divine Comedy: Inferno, Canto 23 (Penguin Books Edition, translated by Dorothy L. Sayers. London: 1949)
2 Asser, Life of King Alfred, Translated by L.C. Jane, M.A. (Cooper Square Publishers: New York, 1966) 27, 39
3 Richard Abels, Alfred the Great: War, Kingship and Culture in Anglo-Saxon England ( Longman: London & New York, 1998), 268
4Secular rulers exercising disproportionate influence over Church affairs did not start with the Reformation; it had a healthy tradition going back to Edward I of England, Frederick II and Henry IV of Germany and even to Justinian. The difference is that after the Reformation era, what had previously been the personal actions of a few rulers became a dogmatically defined doctrine of state (cuius regio eius religio) and many secular lords tried to do away with Church mediation entirely, insisting that the King ruled by God’s grace alone and was not responsible to any earthly Church or ecclesiastical official.
5 The full-scale conversion of Junkers into the Prussian officer corps began in with King Frederick William I around 1717. (Anthony F. Upton, Europe: 1600-1789. Oxford University Press: New York, 2001), 254
Posted by Boniface at 1:18 PM

I like the substance of your essay, but I have some little quibbles.

You write: “From the victory of Constantine as sole ruler of the Roman Empire in AD 324 to the Peace of Augsburg in 1555, the Christian world was united firmly under the rule of a succession of Catholic monarchies.” You seem to be here ignoring the many barbarian Arian monarchies, like that of the Ostrogoths in Italy under Theodoric the Great, or the Visigoths in southern Gaul and then later on Spain. The remarkable thing about Clovis and the Franks was that they converted straight to orthodox Catholicism, whereas the majority of Christian barbarians in the 300-600 period were Arian.

When you said "Pharonic" did you mean Pharaonic?

Perhaps saying "plus" (in light of two hundred plus years) is a bit informal--in light of more than...

"Wherever Catholicism went, it structured society around its principles; whenever it came into contact with barbarian tribes where civilization had not yet reached, such as among the Irish and the Franks, the result was a wholly unique Christian culture."
But didn't the Franks invade a Gaul that had long been incorporated into the Empire? The Franks didn't have Roman civilisation before their invasion, but as soon as they bear any importance as a people, they are in contact with Roman culture.

If this was the beginning of a book, I'd eagerly turn the page to read more. It's very good so far.