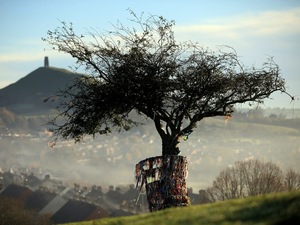 This is one of the saddest stories I have read all year - the hallowed Glastonbury Tree, a timeless symbol of Christmas in England and a sign of the antiquity of Catholicism on the island, was cut down in the night by vandals last week. Here is the story from NPR:
"Legend has it that the rare thorn tree on a hill in southern England had ties to the earliest days of Christianity, and pilgrims often left offerings at its base. In more recent times, local children honored its current incarnation each year by cutting sprigs to place on Queen Elizabeth II's Christmas dining table.
Now British police want to know who sawed the limbs off the Glastonbury Holy Thorn Tree, reducing it to a stump. And they want to know why.
"I've just driven past the site, and people are coming out in tears," said Glastonbury Mayor John Coles. "I've never seen a sadder sight, or a more serious act of vandalism, in my 60 years in Glastonbury."
Glastonbury, 125 miles west of London, is best known for its annual rock music festival, which has drawn artists such as Bruce Springsteen since the 1960s. Its mysterious landscape — including the Glastonbury Tor hill, which is believed by some to have magical qualities — has drawn pagan worshippers for many years.
Katherine Gorbing, the director of Glastonbury Abbey, said the tree originally came from the Middle East and is a type of thorn tree common in Lebanon as well as in Europe. It typically lives about 100 years, but Gorbing said locals have kept Glastonbury Holy Thorn Tree going by taking grafts and clippings from it to plant new trees when the existing one neared the end of its natural life.
"It's a sacred tree," she said. "Not only for the Christian church, but for many other people."
The tree itself, located near the summit of Wearyall Hill, is visible from many parts of rural Somerset.
Coles said the nighttime attack came between Wednesday and Thursday shortly after he, the local vicar and schoolchildren participated in the annual sprig cutting for the queen's Christmas table.
The sprig is sometimes visible during her televised Christmas broadcast to the Commonwealth — and the queen always sends a letter of thanks, he said.
Coles believes that someone who saw the sprig ceremony on local television or who witnessed it in person — decided afterward to chop down the tree, which did not have any security cameras nearby.
"It could be an anti-monarchist, an anti-Christian, or someone who's an atheist," Coles said. "We don't know whether it's one person responsible or a group."
Avon and Somerset police would not comment on the motive. No arrests have been made.
The once-proud tree provides Glastonbury believers with what legend says is a significant link to the early days of Christianity in England.
Religious tradition holds that the original tree was planted by St. Joseph of Arimathea — the wealthy merchant who volunteered his prepared tomb to Jesus — after he first made landfall in England some 2,000 years ago. The chopped-down tree is thought to be descended from the original. It blooms twice a year — during the Christmas season and again around Easter.
"The story goes that Joseph of Arimathea pushed his staff into the ground and pronounced it to be weary — that's why it's known as Wearyall Hill," Coles said. "The tree is said to have grown from the staff. It's something you can't prove or disprove."
Some people believe the growth of the wooden staff into the tree was a full-fledged miracle, while others believe it was left standing in a boggy area for months and eventually sprouted, said Susan Strong, an education officer at Glastonbury Abbey.
"You can take the miraculous approach or the pragmatic approach," she said.
Local historians said the tree — or one of its ancestors — has been chopped down at least once before, by a soldier using an ax during the 1642-51 English Civil Wars.
Experts say the tree could recover in about 10 years if it was in good health at the time of the attack.
"It will obviously be deformed, but it will put grafts out next spring," said Tony Kirkham, head of the arboretum at the Royal Botanic Gardens at Kew. "But it will take a long time to make a good tree."
Even with that hope, Gorbing called the loss of the tree devastating.
"The tree unites everybody in the town," she said. "It's a symbol worldwide. Local people do see this as an attack on Glastonbury."
Here is a picture of the tree as it now stands: 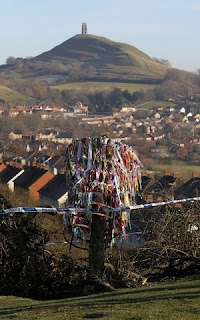 The lack of coverage of this disgraceful and sad act of vandalism in the media here has also been shocking.