Baptism of Blood in St. Bede 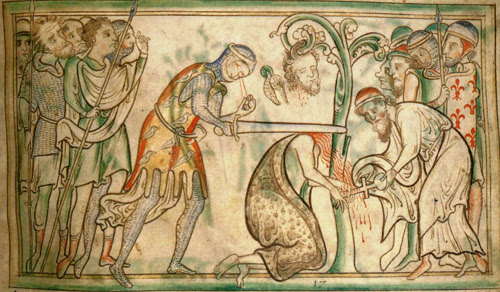 The martyrdom of St. Alban of Britain
For the sake of those who deny absolutely that a person can be saved apart from water baptism, it is sometimes helpful to call to mind examples of the "baptism of blood" from ecclesiastical history. A great example is St. Emerentiana, of whom the Divine Office says:


"Emerentiana, a Roman virgin and the foster-sister of the blessed Agnes, while she was still a Catechumen, burning with faith and charity, rebuked the idol-worshippers who were full of fury against the Christians, whereupon a mob assembled and stoned her. Praying in her torment at the grave of Saint Agnes, and having been baptized in her own blood, so generously shed for Christ, she gave up her soul unto God" (Matins, Jan. 23rd).

Other examples are St. Genesius of Arles, St. Rogatian and St. Victor of Braga, of whom you can read more about here.
I would like to add one more that I just came across today - an unnamed martyr killed alongside St. Alban, mentioned in Chapter 7 of St. Bede's History of the English Church and People, written around 720-731. In Bede's account (which he places around 304, though some suggest the persecution of Decius as more likely), St. Alban is brought before the pagan judge and refuses to abandon his Faith in Christ, which of course provokes the judge. At this point, Bede tells us:

"The judge...ordered this holy confessor of God to be scourged by the executioners, believing he might by stripes shake that constancy of heart, on which he could not prevail by words. He, being most cruelly tortured, bore the same patiently, or rather joyfully, for our Lord's sake. When the judge perceived that he was not to be overcome by tortures, or withdrawn from the exercise of the Christian religion, he ordered him to be put to death. Being led to execution, he came to a river, which, with a most rapid course, ran between the wall of the town and the arena where he was to be executed.

He there saw a multitude. of persons of both sexes, and of several ages and conditions, who were doubtlessly assembled by Divine instinct, to attend the blessed confessor and martyr, and had so taken up the bridge on the river, that he could scarce pass over that evening. In short, almost all had gone out, so that the judge remained in the city without attendance. St Alban, therefore, urged by an ardent and devout wish to arrive quickly at martyrdom, drew near to the stream, and on lifting up his eyes to heaven, the channel was immediately dried up, and he perceived that the water had departed and made way for him to pass. Among the rest, the executioner, who was to have put him to death, observed this, and moved by Divine inspiration hastened to meet him at the place of execution, and casting down the sword which he had carried ready drawn, fell at his feet, praying that he might rather suffer with the martyr, whom was ordered to execute or, if possible, instead of him.


While he thus from a persecutor was become a companion in the faith, and the other executioners hesitated to take up the sword which was lying on the ground, the reverend confessor, accompanied by the multitude, ascended a hill, about 500 paces from the place...Here, therefore, the head of most courageous martyr was struck off, and here he received the crown of life, which God has promised to those who love Him.


At the same time was also beheaded the soldier, who before, through the Divine admonition, refused to give the stroke to the holy confessor. Of whom it is apparent, that though he was not regenerated by baptism, yet he was cleansed by the washing of his own blood, and rendered worthy to enter the kingdom of heaven. Then the judge, astonished at the novelty of so many heavenly miracles, ordered the persecution to cease immediately, beginning to honour the death of the saints, by which he before thought they might have been diverted from the Christian faith."

If we take the teaching on this from the Fathers, together with St. Thomas's affirmation of the various kinds of baptism (STh III. Q. 66. Art. 11; III. Q. 68. Art. 2), of which he says baptism of blood is the most excellent, the clear teaching of Trent and of the modern Magisterium, St. Bede's testimony from the 8th century provides a helpful link between the patristic and high medieval periods, demonstrating that even in remote places like the monastery of Jarrow in what is commonly asserted to be one of the darkest periods intellectually, this teaching was still acknowledged within the Church, and that Bede says that the fact of this martyr's cleansing by the shedding of blood is "apparent", meaning presumably all his readers would understand and agree with the statement.
Book One of Bede's history is available online here. I don't know whether the whole work is available online, but if somebody finds it, please let me know.

I know this has nothing to do with the entry, but have you thought about writing on the subject of Jansenism one of these days? I'd like to read about your take on it.

I'm doing some stuff on Jansenism in June, which is going to be "French Month" on the blog - all posts will be about France. |
|
BTW, if you are on FB, you should follow this blog...readers can send me suggestions like yours directly.

The sad thing about topics like this is that there are RadTrads like those of the Slaves of Immaculate Heart of Mary (St Benedict Center) in New Hampshire that was founded by Fr Feeney who even now on their webpage push for an improper (even heretical) stance on water baptism only, strongly denying Desire and Blood (even rejecting plain language in Trent and other such documents).

Doing a search on their webpage for St. Emerentiana, it turns out they discuss her but they say "it is inconceivable that she wasn't baptized" in water since St Agnes was killed in persecution 2 days earlier and thus should have rushed to baptize catechumens. They clearly didn't quote the whole Divine Office reading here for obvious reasons.

That's the one! Thanks. I linked it up on my "Favorite Saints Writings" section on the lower sidebar.

The Slaves of the Immaculate Heart of Mary do a fine job of defending their position, in fact, Brian Kelly's recent article casts serious doubt about baptism of desire and I have yet to see anyone who supports it give as convincing an argument for it as he gives against it.

I can't say I'm totally sold on the Feeneyite position but the arguments of the St. Benedict Center are pretty solid. I personally don't reject baptism of blood but I'm not totally sold on baptism of desire, at least not for those who are not catechumens. Even granting baptism of desire, I don't think that many people actually get it. There was an FSSP priest that once said somewhere in the writings of Blessed Pius IX it was condemned that we could have the reasonable hope for the salvation of non Catholics although I don't know where in his writings that is.

The Church has spoken pretty clearly on Desire, and to a lesser but still reasonable way on Blood. The Slaves of Mary (Feeneyite) position is heretical on the surface, since they don't grant Desire in any degree. I say that with reluctance, because their cause is very noble.

I simply cannot turn a blind eye to what, e.g., Trent explicitly teaches, nor can I seek to minimalize it into irrelevance. There is a substantial difference between taking a 'narrow' reading of Desire being applicable and denying Desire outright.

The Bl. Pius IX quote you're speaking of is from his Syllabus of Errors, but it was speaking of universalist tendencies, not the legitimacy of receiving Desire or Blood.

Yes, that statement is from the Syllabus, 17, which itself is a summary of Quanta Conficiamur (1863). However, at least as regards Protestants, it doesn't have anything to do with baptism of desire or blood since most Protestants are already baptized. I am doing a post on this in the future, BTW, comparing (and harmonizing) the Syllabus, Quanta Conficiamur and Unitatis Redingratio.

I believe in baptism of blood but not baptism of desire. Many early church fathers believed there were two forms of baptism, by water and by blood, both which came out of the side of Christ when he was pierced. Gregory of Nazianzus, Cyprian, Cyril of Jerusalem and others all held to this view.