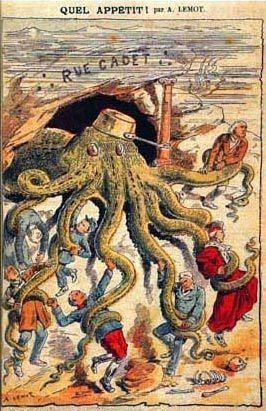 A political cartoon from 1904 depicts the Masonic octopus strangling Catholic royalists
The entire month on this blog is dedicated to France - all posts from now until June 29th, the 4th anniversary of the founding of this blog, will feature articles relating to Catholicism and France or French culture. We begin this series with the important but much neglected Masonic conspiracy known as the Affaire des Fiches.
In 1904, the French government of the Third Republic was in the hands of President Emile Combes, who served from 1902 to 1905. Besides the usual fractious divisions within French politics of the time between Royalists, Republicans and Bonapartists, there was the added division between clericalists and anticlericalists, the latter being generally opposed to the Catholic Church and in particular to the establishment of the Church in France, calling for a total separation of Church and State. President Combes, an ex-seminarian, was a dedicated anticlericalist, and also a Freemason. The Affaire des Fiches concerned the efforts of the President of France to use his political authority and his contacts with the Freemasons to undermine the efforts of the pro-Church clericalists by "Republicanizing" the government; i.e., seeing to it that only Republican anticlericalists were promoted within the government bureaucracy. To a lesser extent, this had already begun under Combes' predecessor, René Waldeck-Rousseau (1899-1902), who with his Associations Bill of 1902 formally sought to promote only those who held Republican principles to high posts in government. Combes' plan proposed to go much further, however, expanding the spying down to lower level army officers and throughout all levels of the bureaucracy.
Such a scheme required data gathering on a massive scale. Even today such a plot would take a tremendous amount of spying, let alone in 1904. To accomplish this, President Combes drew upon two sources: the resources of the Masonic lodge network within France, and the cooperation of his subordinate and fellow Freemason, General Louis André, Minister of War and a very militant anticlerical. Through the influence of André, Masonic lodges throughout France secretly gathered data on government officers, especially army officers, to determine if their sympathies were Republican or anticlerical. This was done mainly by noting who was a regular Mass attender and who was not. This data, written on slips of paper, was then forwarded to General André.
Samples of these slips reveal the extent to which the Masonic networks spied upon these suspected Catholics. On the cards and set up, we could see entries like "VLM" for "Go to church" or "VLM AL" for "Go to church with a book."  The cards are not content to report only the facts as reflected in the designations of "clerical clericalizing", "cléricafard", "cléricanaille" (sometimes using the more derogatory phrases "black cap thoroughbred", "jésuitard ," "great swallower of God," " old skin closed to our ideas"), but also also relate to privacy or family of the officers: "Civil Suit in processions," "attended Mass first communion of his daughter," "Member of the Society of St. Vincent de Paul ," "To his children in a jésuitière", "keeps a cross in home", "has a very wealthy woman," "Lives with husband and wife an Arab woman." Records such as "Has received the blessing of the pope at his wedding by telegram" demonstrate that even telegrams and mail was spied on.
Once the data was collected, these slips (fiches) were sorted into two piles termed the Corinthe and the Carthage. The Corinthe consisted of officers with atheist or agnostic beliefs and were scheduled to advance; the Carthage consisted of practicing Catholics who were to be intentionally held back from promotion.
A scam that big cannot go unnoticed for long; indeed, it was soon discovered, betrayed by one of the Masons themselves, Jean-Baptiste Bidegain, assistant secretary of the Grand Orient of Paris. Bidegain contacted Jean Guyot de Villeneuve, a nationalist member of Parliament. Though a high-ranking Mason himself, Bidegain was appalled at the whole scheme and provided Villeneuve with enough evidence to bring the matter to the public's attention.
On October 28th, 1904, Villeneuve exposed the plot on the floor of Parliament armed with letters, correspondences between lodges,and copies of letters transmitted to General Louis André. An investigation followed, in which over 3,000 slips of paper (fiches) were discovered with such information as described above. The public was outraged at the affront to religious freedom and privacy. Even anticlerical groups denounced the affair. General André immediately resigned in disgrace; the scandal went all the way up to President Combes, who attempted an unconvincing defense but was unable to stop his government coalition from collapsing. His socialist allies deserted him, and amidst increasing furor, he resigned the presidency on January 17th, 1905.

Interestingly enough Bidegain, the Mason who had tipped off Villeneuve, ended up leaving the Masons and publishing many articles against their influence in France. He became known as the "Judas of the Grand Orient" among the Freemasons and ended up committing suicide in 1926.
Despite the fall of Combes government and the popular outcry against the Masonic conspiracy following the Affaire des Fiches, it was not enough to defeat the rising tide of anticlericalism. Almost a year later, on December 9th, 1905, the French Chamber of Deputies passed the Law on the Separation of Church and State, officially disestablishing the Catholic Church in France and establishing secularism.
Posted by Boniface at 10:38 PM