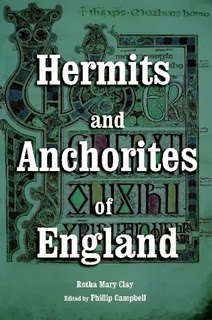 In fact it did not. While monasticism became the dominant manner of asceticism, at least in the west, there always remained an eremetic strain, albeit a minority. Medieval Europe never lacked for hermits, dwelling in the caves of France or on the rocky isles of the Irish Sea, sanctifying the world by their presence and offering unceasing prayer to God.

Medieval England had a particularly rich eremitic tradition, one that began with the great hermits of the Anglo-Saxon and Irish tradition and continued right up until the eve of the Anglican revolution. This long tradition is documented in the newest addition to the Unam Sanctam Catholicam bookstore, a new edition of the classic 1914 work Hermits and Anchorites of England by English medievalist Rotha Mary Clay.

Biographies of medieval hermits are not easy to pin down. We know of them mainly through anecdotes in other historical works, occasional hagiographies of the exceptionally saintly, depictions in manuscripts, and finally through the dark caves and desolate peaks they inhabited that still survive. The lives of evangelical monks such as St. Columba or St. Dominic are well attested, while the annual events of the monasteries are preserved in the various monastic annals that still survive. But the hermits did not go out into the highways and byways seeking converts, nor did they have disciples to record their deeds. Their lives are cloaked in obscurity. The very hiddeness of the eremitic life means it is difficult to document. A hermit, by definition, is one who tries to avoid the attention of the world, and this includes historians.

This difficulty is especially acute in the case of England where, besides the typical difficulties faced by historians, we are also confronted with the rupture occasioned by the Protestant Reformation. The 14th and 15th centuries were particularly fruitful eras in the history of English Catholic spirituality; on the eve of the Reformation the English wilderness was dotted with men and women seeking holiness through the eremitic life. But beginning in 1536, the now-Protestant English crown pursued a policy of suppression of monasticism throughout the kingdom; the tragic history of the dissolution of the monasteries is well known. What is less well known is that the hermits of England were subject to similar attacks during the same period, being forced out of their solitary abodes and onto public pensions. Not content to suppress and plunder the monasteries, Henry VIII and his successors could not tolerate that even one solitary hermit remained in the fens and rocks of the kingdom praising God alone in his cell. Thus, a rich English tradition was destroyed and the English eremitic age seems like a distant dream.

It is here that Mary Rotha Clay’s book is so valuable. Drawing on land titles, legal records, primary sources such as the 13th century Ancrene Riwle (“Guide for Anchoresses”), and even archaeological remains, Ms. Clay is able to reconstruct a vivid picture of the eremitical life in Merrie Old England. We are introduced to characters such as Kenyth of Glanmorgan, a Welsh hermit who lived exposed to the rain and wind on a promontory jutting into the Irish Sea; David Welkes, a 15th century hermit of Dover who won the esteem of King Henry V; Celestria, an enclosed anchoress of Gloucester, and many more men and women who served God in solitude from the days of Hengist and Horsa right up until the eve of the Reformation, when the agents of Cromwell drove them out of hiding and made them pensioners of the Crown.


Hermits and Anchorites of England is particularly noteworthy for its abundance of illustrations depicting the caves and dwellings of these hermit folk. Most of these descriptions were collected by Ms. Clay herself during her extensive travels throughout England researching the work. Rotha Mary Clay was born on 17 August 1878. She was of the minor nobility, a sort of hermit herself, remaining unmarried her entire life and devoting herself to scholarly pursuits . She was attained the honorary degree of Master of Arts (M.A.) by Bristol University and soon after published exhaustive study of England’s medieval hospitals (1909) that is still valued by historians today.


Hermits and Anchorites of England (1914) gives us an example of Ms. Clay’s work in her prime. Reading her voluminous compendium of land titles, pensions and archaeological sketches, one is astounded by the level of research that went into this book – and in an era when the only way to see a ruin or examine a parchment was to take a horse drawn carriage out to inspect them in person! It is indeed unfortunate that Ms. Clay did not publish more, though we are thankful for what she did.

This new edition of Ms. Clay’s work preserves the original text in its entirety, with only minor changes in punctuation to make it more palatable to modern American readers. Differences in formatting between this edition and the 1914 original made it impossible to retain every illustration on the same page as Clay had them arranged, but we have attempted to get as close as possible. The book contains over fifty illustrations; no illustrations from the original are omitted


It is our hope that this reprint of Ms. Clay’s classic work will inspire in the reader a greater love for England’s medieval Catholic heritage, enkindle a deeper understanding of the eremitic vocation, and hasten the return of the day when our culture is again seasoned with the presence of Catholic hermits offering their prayers and their very lives to God in the solitary places of the earth.

Many reproductions of older books are done using optical character recognition software (OCR), which works by simply scanning pages and attempting to use artificial intelligence to translate the characters on the page into a particular font. It is a sloppy method which often leaves pages missing, pictures omitted, and other characters in the text blurred, mixed up or missing. This is not an OCR reproduction; it is an actual new edition of Ms. Clay's work, fourteen months in the making, edited by hand with a new introduction. As far as we know, this is the only print edition of Ms. Clay's work that is not a digitized OCR reproduction.

Or, you can purchase it, along with other original , independent Catholic books, from the Unam Sanctam Catholicam web store, here.

"minor changes in punctuation to make it more palatable to modern American readers."

What? Could I receive an example to see what kind of punctuation is not very palatable to a modern American reader?

There's no need at all, just curious.

A major issue was the way colons were dealt with. When a colon was used, the author would put a space, then the colon followed by a space and then a hypen, like this : -

This looked really weird, especially because she used it so frequently, so I changed it to just a colon with no space, like this:

This was just much more like what we are used to seeing these days. I figured the other " : - " would just be a distraction at best, or at worst people would think I, the editor, didn't know what I was doing.