The Grazing of the Vineyards 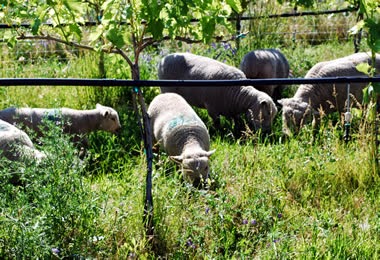 The other day I was in a conversation with a priest and a woman. The woman was inquiring about the Synod on the Family and anxiously asked the priest if the pope and bishops really intended to change the teaching on communion for the divorced and remarried. The priest responded with incredulity, stating correctly that the teaching of the Church could never change. I jumped in and said, "Well, the issue is not so much whether the teaching will 'change', which of course it cannot. Rather, the issue is whether the Synod will implement an approach that is sufficiently decentralized and 'pastoral' to allow abuses to go unchecked at the diocesan level while the teaching technically remains in place." The woman understood the danger and responded that it was an "underhanded" way of changing the teaching without changing the teaching. The priest, however, was dismissive and said it could "never happen."

In the readings from the Old Testament this past Sunday, we heard the parable of the vineyard from Isaiah 5:1-7. This is one of the most important parables of the Old Testament and is echoed in the Gospel of Matthew by our Lord, who compares His people to a vineyard that has not produced its expected increase. Let us look at this beautiful passage from Isaiah (I use the NAB translation here because this is what most of us probably heard at Mass):

Let me now sing of my friend,
my friend's song concerning his vineyard.
My friend had a vineyard
on a fertile hillside;
he spaded it, cleared it of stones,
and planted the choicest vines;
within it he built a watchtower,
and hewed out a wine press.
Then he looked for the crop of grapes,
but what it yielded was wild grapes.

Now, inhabitants of Jerusalem and people of Judah,
judge between me and my vineyard:
What more was there to do for my vineyard
that I had not done?
Why, when I looked for the crop of grapes,
did it bring forth wild grapes?
Now, I will let you know
what I mean to do with my vineyard:
take away its hedge, give it to grazing,
break through its wall, let it be trampled!
Yes, I will make it a ruin:
it shall not be pruned or hoed,
but overgrown with thorns and briers;
I will command the clouds
not to send rain upon it.
The vineyard of the LORD of hosts is the house of Israel,
and the people of Judah are his cherished plant;
he looked for judgment, but see, bloodshed!
for justice, but hark, the outcry!


The fact that God had promised to maintain His land does not mean that He is obligated to always put it to the same use. Using the analogy of landlord and his piece of property to explain God's actions toward His people, He had initially hoped to grow grapes from this vineyard. The vineyard did not produce, and so He tried various things - pruning it, building a hedge around it, clearing the stones, planting the choicest sorts of vines; in short, everything any reasonable land owner would do to make his piece of agriculture productive.

And yet it was not productive. The prophets of Israel warned their countrymen that if they did not "bear fruit that befits repentance" that God would come in judgment. Perhaps because of spiritual and moral laxity, perhaps because of a reckless confidence in God's promises to Abraham and David, the Israelites assumed that their kingdom would always endure and that they would never be taken from the land. They made a very presumptuous mistake: they mistook the existence of the political Kingdom with the existence of themselves as a people, and while God had promised to always maintain the latter, He had given no such assurance of the former. Thus the kingdom was taken from the Israelites, and the people sent into exile.

This is what God means when He says that He gave the vineyard over to grazing. A landowner cannot ever "destroy" his property, in the sense that land as such is indestructible - but he can certainly alter its use, sometimes in radical ways. When the vines did not yield grapes, God plucked them up, had the walls trampled down, and gave the vineyard over to the wild animals (the nations) for grazing. And because of the reckless, presumptuous overconfidence of the Israelites - whom the prophet Jeremiah says were led astray by false prophets who only spoke what the people wanted to hear - they were caught unaware and led to destruction.

My friends, just because God has promised that this vineyard - the Church - will always endure and that He will always look after it does not mean that the situation of the Church in this world could not be radically altered. In the case of the vineyard, God is still "maintaining" the land when He breaks down the wall and gives it over to grazing. He is maintaining the way any husbandman does:  by putting the land to its highest and best use. If the vineyard consistently refuses to bear fruit for the Master, there is no reason to think He will not break down our walls and give us over to grazing. This has already happened to a large extent over the past fifty years.

Of course, this is ultimately remedial. The grazing allows the land to have rest; the manure of the grazing animals fertilizes the ground and the husbandman hopes that, in the future, the land will be more productive when it is again ready for grapes.

So, will the Synod change the teaching of the Church? Of course not. In fact, it may be a total non-event.  I readily admit that we may get through this and nothing at all could change. But then again, nothing need officially "change" for much destruction to be wrought, and in the end that is what we care about - not whether on paper any teaching has been "changed" (which is impossible), but in reality how much destruction is wrought and how many souls may be lost. A lot of souls have been lost since the reforms of Vatican II, which remember, did not "change" any teaching.

Will God ever abandon this little piece of property which He has claimed for Himself and bought with His blood? Of course not. Such a thing cannot be. Could He choose to give it over to grazing? Could He break down its walls? - that is, many of the visible structures that have provided security in the past? Could He command His clouds not to rain on it? - that is, withhold many of the gifts that He had showered upon the Church in ages past? Could He pluck up much of the vines by the roots and cast them away to be burned, and could He give over the land to the grazing of animals, who will trample it down with their hooves, grind the vegetation between their teeth and foul the earth with their dung? Of course He could do all this. In fact, unless we bear fruits befitting repentance, He will most certainly do all things.

Perhaps then - and only then - will our little, beloved piece of ground be disposed to again produce good fruit. But until then, let it be given over to grazing.

Amen. The Government of the Church is threefold- Legislative, Judicial, Coercitive, and any law - such as Humane Vitae - that is promulgated without any coercion (punishing ministerial miscreants) is but counsel.

19162 B.C.E. we abandoned discipline (coercion) in favore of love (laxity and indifference) and the resulting chaos is as fetid as it is infamous.

So, yeah, the vineyard will continue to fall into doctrinal desuetude, the purpose of the Church- Sanctification- will continue to be superseded by dialogue and soup kitchen work; that is, we will continue to devolve to a ministry whose purpose will be nearly indistinguishable from the Salvation Army.

On the other hand, some great cabernet can be had for decent prices nowadays

Similar thoughts ran through my mind after Mass last Sunday. You described it here beautifully.

What change will happen?

Bah. I'd guess that there's lots of folks who are already going to communion after "re"-marriage.

Matter of fact, I'd bet that nobody much thinks twice about about going up to communion, 'cause nobody much believes in the Real Presence anymore.

Is it really true that there are a large percentage of people who are living in irregular marriage situations, who are desperately pining to receive Jesus in the Eucharist, and are only held back by their devotion to the traditional Catholic understanding of marriage? Or is this synod really about something else?

There was, of course, the thesis that the promise only extended to the gates of hell not prevailing, but that God deciding that the Church had outlived its usefulness was another matter.