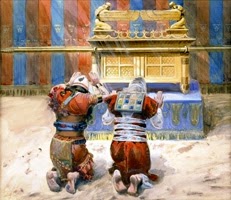 There is much talk these days about "going out to the peripheries" and about finding a "use" for contemplative religious orders whose charisms have not traditionally been activist. The modern world has a very difficult time understanding the contemplative tradition. As far back as the late Enlightenment, the heretic Emperor Joseph II of Austria gave his name to the heresy of Josephism which taught that only the active orders could be considered "useful"; a century later Pope Leo XIII censured the heresy of Americanism, which among other things, prioritized the active over the passive virtues, thus inverting the traditional hierarchy.

We could refute this by reference to the lives of the saints, which provide us with ample evidence to the contrary. But in order to keep this brief, let us appeal rather to the Sacred Scriptures, where the person of Joshua furnishes us with a marvelous example of the contemplative who bears rich fruit.

Joshua as a contemplative? You have read correctly. Joshua is of course known for leading the children of Israel in the conquest of the Holy Land, presiding over her armies as a sort of military ruler. But what is less known is that Joshua had an extraordinarily intense spiritual life and spent years and silent contemplation before the Lord before God elevated him to lead the hosts of Israel.

Let us turn to the Book of Exodus, where we read of how God used to come to address Moses in the Tent of Meeting, where the Ark of the Covenant was housed and which represented the tangible presence of God among His people:

Here we see the formation of Joshua before he succeeded Moses. Joshua spends his days inside the Tabernacle, alone with God. What must this have been like! Hour after hour prostrate before the visible presence of God, which was manifest by the pillar of the cloud whenever Moses approached. When I sit alone in Eucharistic Adoration, I often imagine myself in the place of Joshua, sitting alone in front of the Ark of the Covenant and the awesome mystery it represented.

How long did Joshua spend before the Presence of God? We do not know; this particular episode narrated above happened immediately after the Exodus, but since this arrangement continued throughout the forty years in the wilderness, we may reasonably surmise that this was the practice of Joshua throughout the entirety of the forty years. This means that before Joshua ever led a single battle in the Holy Land or waged any of his famous campaigns, he spent upwards of forty years in regular, perhaps daily, adoration of God silently inside the Tabernacle.

We also read that Joshua was present with Moses on Mount Sinai when the Law was received. We all know the story of Moses receiving the Law, but we seldom recall that others were present on the mount as well. Exodus 24:9-11 states that beside Moses, Aaron and his sons as well as seventy elders went up on the mountain and beheld the face of God and feasted in His presence. Joshua is not mentioned here, but later in episode of the golden calf, it appears that Joshua was on the mountain with Moses when the Law was received. He accompanies Moses down and is the first to hear the sound of revelry in the camp, which he initially mistakes for a battle (cf. Ex. 32:17-18).

How long was Joshua on Sinai? We do not know, but he appears to have been acting in the position of Moses' personal assistant. If so, there is no reason to suppose he was not on the mountain the entire forty days - probably standing a far off or maintaining his distance from the frightful theophanies being experienced by Moses, but on the mountain nonetheless. And what was he doing for that time? We may reasonably suppose the same thing he does in the succeeding years sitting in the Tabernacle: adoring the presence of God.

All in all, the picture we get of Joshua in the Book of Exodus is of a man who passionately desires the Presence of God. Yes, he will do mighty works - in his warfare and the worldly, administrative concerns that will envelop him after Moses' death, he is undoubtedly a Martha. But prior to assuming this role, we see him spending decades of formation in what can best be described as a contemplative tradition - countless hours in the silent adoration of the mystery of God's presence. In his formation and the desires of his heart, he is a Mary.

In the Book of Joshua, Joshua is one who discerns the voice of God and is able to carry out His will. Are we to think that those long years silently adoring the Presence of God did not have something to do with this? Indeed, we see in Joshua that the source of his fruitfulness in his worldly endeavors was probably tied directly to his sensitivity to the Spirit of God, as formed through countless years in God's presence.

Contemplative spirituality and contemplative religious orders are not "useless", and it is a tremendous error to view their value only in terms of how much they can "open up" to "doing something" evangelical, The contemplative life has always been valued higher than the active life, both in the absolute sense, and in the sense that even the fruitful exercise of an 'active' ministry presupposes a strong grounding in the interior life.

Some may have accused Joshua of being "self-absorbed" for spending so many hours in silent adoration before God; he no doubt may have come off as "closed", maybe "sad" and "funereal" at times for the gravity of the mystery he was adoring - perhaps at times aloof, "anesthetized" to the goings on of the world around him - had we known Joshua, like many saintly men and women, we may have found him to be a "real downer." Some may have urged him to stop being so "enclosed" and to get himself out "to the peripheries." But ultimately, had Joshua not spent those precious years in formation - and a very intensive formation the likes of which we can hardly imagine - it is doubtful whether he would have been the successful leader he became.

The power to shout and knock down walls flows from humble worship in the Presence of the Holy One. If we wish to do the former, we cannot neglect the latter.
Posted by Boniface at 2:04 PM

Odd that the people who speak the most about love are often the first to ignore this. Merry Christmas, bloggers!