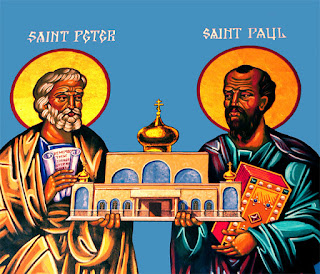 Today, June 29th, 2015, Feast of Sts. Peter and Paul, is the eighth anniversary of this humble little blog - which has grown to be quite a sprawling endeavor. The sister site, Facebook page, Cruachan Hill Press...there are all sorts of little spin-offs that begun with this site! I want to thank my co-founder and absentee blogger Anselm, our contributors Noah Moerbeek and Maximus, as well as new contributor Wes Hunt; also John Goodall (who edits all my rambling website articles for typos), Blake from Popin' Ain't Easy who does movie reviews, and AR Danziger Art & Design who have done most of the art for this site and its endeavors over the years. I also want to mention Alleluia Audio Books and Athanasius Contra Mundum, two sites with whom USC has a particularly close relationship - as well as all those blogs, Facebook pages, and folks who have helped promote USC over the years.

I find it ironic that my first post on June 29th, 2007 was on the question of morality and legislation and how issues of morality are intimately bound up with human law. This has been the view throughout all of Christendom; a far cry from the philosophy of Chief Justice John Roberts, who  -though he ultimately dissented on the same-sex "marriage" judgment - stated in his dissent that "Whether same-sex marriage is a good idea should be of no concern to us." This is why this experiment in secular republicanism that we call the United States is failing. The sooner Catholics divest themselves from putting any hopes in this governmental system, the better. "Back to the Constitution" will not save you.

But we are supposed to be celebrating USC's completion of its eighth year, not getting bogged down in the miseries of the day!

I am sorry I have not posted as frequently as I would like; my wife and I are in the process of selling our house and I have a lot less free time at the moment. I am also still in the process of reading Laudato Si, which I will post on sometime in the next month, hopefully. I know I will be way behind the ball on that, but I am not one of those bloggers who feels that they have to be the first to offer commentary on every current event as soon as it happens. Blogging is not journalism, and while I sometimes offer commentary on current events, I don't feel bound to that format. I like to take my time with something...mull it over carefully, and publish whenever I feel like I have a cogent thought - or at least that's the ideal! Can't always say my thought is cogent...

But in the meantime, there is a ton of stuff we have published on the sister site over the past six months. If you really have a lot of time on your hands, check out some of our other material:

Other items of interest...

Make sure you check out my podcast with Ryan Grant of Athanasius Contra Mundum.

Also, speaking of podcasts, in case you didn't know, the USC website features a podcast section. It is updated only infrequently and restricts itself to matters of history. The only thing up currently is a series on Christianity in ancient North Africa, but I am planning one expanding this in the future.

Thank you all for patronizing this blog, which as of today has been viewed over 1.1 million times - something I never would have imagined when I posted my first rant on legislation and morality eight years ago. Pax.
Posted by Boniface at 12:01 AM

I haven't read the opinion, but could reference to "us" have been to the SCROTUS, as opposed to the government in general? In other words, whether it was a good idea or not to have ssm, that is something the legislature or voters decide, not the judiciary. Whether something is a good idea or not is important to the law, but in a democracy, the venue to hash that out is Congress or the voting booth, not the Court.

C Matt , it was always my understanding he was referring to the SCOTUS. I find it abhorrent that the highest court in the land seems to think it can reason In an amoral vacuum.