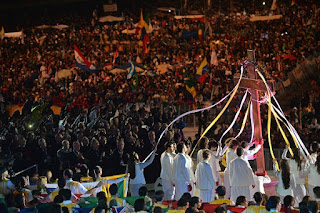 Since the pontificate of John Paul II, we have witnessed the strange phenomenon of the "pop-star popes": a cult of personality surrounding the Roman Pontiff that has little to do with his office as successor or St. Peter and more to do with him being someone "important" and getting treated like a kind of celebrity. Some of this is natural and unavoidable when dealing with any truly important world figure - but much of it is fed by the popes themselves, who in their globe-trotting adventures, massive outdoor Masses, concerts at World Youth Day, and other grandiose events allow an aura of media celebrity to form about them.


Perhaps it will get worse. Maybe what was once described so optimistically at Vatican II as "enculturation" of society to the Gospel will become full blown descent of the Gospel to the culture - even more so than today. Maybe the popes will descend into the pop-entertainment milieu and describe it as a means of "evangelization." Perhaps some day the popes will record their own pop albums in hopes that such a medium will be more "relevant" to the youth of today.

Well, the future is here, because Pope Francis has recorded and released his first pop-rock album.

Or, to be more specific, Pope Francis has signed off on the release of an 11 track album called Wake Up! Go! Go! Forward! The album features what the U.K. Telegraph calls his "wise homilies and moving speeches" set to Indy rock music. Tony Pagliuca, who worked on the album, said the pope's rhythmic voice gave the tracks a feel of "slow rap."


The senior producer was Father Giulio Neroni, the director of St. Paul's Multimedia who is best remembered for compiling a Vatican playlist for MySpace that included a song by Tupac Shakur, who Fr. Neroni described as an artist who merely wanted to" aim to reach the heart of good minded people." Fr. Neroni released a sample track of the Wake Up! that has apparently been downloaded a billion times. The sample track is from a papal homily in South Korea. The pope's voice comes in around 2:00:

To what degree is the pope involved in this project? He signed off on the concept and was presented with a copy of the finished album by Fr. Neroni in August. The pope himself has not commented on the album.

John Paul II was the first to allow such a project to be recorded with his "Abba Pater" album. Pope Benedict XVI also had a similar album released, although in his case the album consisted of Gregorian chants and polyphony interspersed with papal homilies. Like World Youth Day, it looks like this papal album thing is just becoming something all popes do now, a real milestone ofThe mixing of enculturation.

This is just the detritus that has blown-off the universal garbage scow that was the 1960s and frankly, it was does better the first time:

Should it not be called Pope Rock?

So bad, no matter how appropriate or inappropriate. Sounds like homeless person ramblings set to cheesy light jazz.