I want you to take a good, hard look at this advertisement for a Jesuit-sponsored retreat in - where else - California: 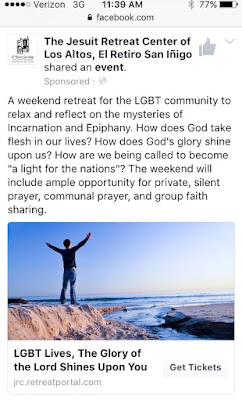 I have not wasted my time on this, but if I were to contact the organizers and object to this event, I am fairly certain they would respond very charitably with some line about reaching out to the margins, "the Church is a field hospital", Jesus ate with sinners, I have not come to call the just, go to the peripheries, reach out to the lost, and so on and so on and so on.

And this response would be very frustrating because, all those things are true - I would not be able to object to any of those statements individually. But I would still know that this event is very, very wrong.

Over the years I have gone round and round with people who argue in favor of a kind of "identity-based outreach ministries" for persons with same sex attraction. I have consistently argued that this is a bad idea, because it inevitably leads to a situation where a group of people are categorized according to their sins and disorders. And there is a fine line between going out to sinners and affirming sinners. There ought not to be a fine line; it is actually a very easy distinction to make - but our stupid generation makes it a fine line.

I vehemently disagree with identifying groups of people by their sins - and this is not just true for sexual sins. I have multiple people in my family who have struggled with alcoholism, but I do not think of them as the alcoholic members I my family; they are regular, fallen humans struggling with a particular vice. I think of them as just...my family, my family where everyone has their own problems, just like any other humans.

I've known people who do drugs; I don't define them as "the drug addicts" - they are sons and daughters of Adam whom my Lord died for, who are fighting - sometimes winning, sometimes losing - a war against a painful addiction. But these addictions, vices, and sins do not define who they are. Part of me feels like it would be an insult to the grace of God to allow them to be defined by their failures.

There is always a danger in making more of these sins than what they are, or turning people into little "communities" where one is identified and understood in terms of their vices. That's certainly not to say there is no place in the Church for ministries geared towards people with particular challenges - support groups for divorced, for substance abuse - I know of one young men's group that is organized to provide mutual support for its members to stop masturbation. This is all fine and well. But nobody speaks of the "Divorced community" or the "Masturbators Community", nor would we think of our friends by those identifiers. "Hey, it's Cheryl my divorced friend", or "Look, there's Joe the Masturbator!"

LGBT persons will respond, "Exactly. And I do not want to be identified as Michael the Homosexual or Julie the Lesbian." I agree 100%. But if that is the case, let's stop with this "LGBT community" nonsense. There is no LGBT community just like there is no masturbators community. There are just people struggling with various problems. If LGBT people do not want to be identified by their sexual activities, then stop perpetuating that identity by insisting on the "LGBT community."

I think when the Church starts adopting the identity based assumptions of the secular world, we risk shifting from the traditional Christian view of helping sinners overcome their sins to a more modern sociological view of "celebrating" the "gifts" that each distinct "community" brings. This is very dangerous - not because, say LGBT people don't have gifts, but none of the gifts they have are because they are LGBT. An LGBT person might be intelligent, have a great singing voice, be good with accounting, or whatever, but none of those gifts are grounded in their sexual disorders.

One might object that a sinner can bring a particular insight as a result of struggling with their sin. Perhaps. But if I am a recovering alcoholic, I certainly may be able to speak more eloquently to the struggles of other alcoholics, but this gift of insight comes not from my alcoholism, but from my victory over it. It comes from the virtue developed in successfully overcoming a vice.

On the other hand, if I am not a recovering alcoholic - that is, if I am still down and out and drunk continually - then I have no business being in any ministry at all till I get my life together. Ergo, either one has a gift to share by virtue of overcoming their vice, or if they have not overcome it, they shouldn't be in any "ministry" - but in no case does a "gift" arise from possessing the vice itself.

No authentic "gift" to the Church can come directly from a person's sin or disorder. But if we insist on speaking of how these disorders can "enrich" the Church's experience, we end up with a kind of "affirmative action" approach to things. For example, what qualities do we look for in a lector? Well, he must be articulate, have a pleasant voice, be able to speak loudly and clearly, and read with the proper intonation and stress. If those qualities happen to be possessed by a man who incidentally is a struggling (chastely) with same sex attraction, then of course there is no problem with him serving as a lector. In this case, we want certain gifts and talents suitable to the office and the person who fills them happens to be struggling with homosexual attraction. His struggle is incidental; everyone struggles.

But suppose we took the approach that there was this LGBT "community" that we needed to reach out to in order to be more "inclusive." Now suppose we need a lector. Instead of looking for the right qualities suitable to the office (voice, projection, etc), we begin with the affirmative action mentality of "This is a great opportunity to showcase how inclusive we are. Let's recruit a gay man to fill this office", and all of the sudden his homosexual tendencies become not incidental, but essential to why he is chosen - because the parish wants to showcase its token homosexual to prove how inclusive they are. In such a case, how can anyone escape the conclusion that the man's same sex attraction is being celebrated, since this is the reason he was invited to lector?

In my opinion, identity-based ministries that create "communities" centered on a particular sin are counter-productive to helping people overcome that sin because they end up creating "communities" out of these persons where their "gifts" are celebrated, rather than their souls cleansed.
Posted by Boniface at 9:45 AM

That retreat ad comes across like "and we'll just all hold hands and sing kumbuya 'cause you're okay and I'm okay." And speaking of community and identity, the community holding the retreat might want to recall its Catholic identity before it loses it altogether.

this retreat house is located right in Silicon Valley, near San Jose and Menlo Park and Mountainview. The Audience for this kind of thing, is obviously the LGBT community, but also it is virtue signaling for the social libertarians who live in this area. Any Church in this area that wants to appeal to a broader group of people than the very traditionalist, must not appear hostile to LGBT (or really anyone).

Catholicism as lived in Blue areas is, well, blue. The alternative is to rapidly shrink the Church down to a size unable to pay its priests' pensions. Yes, in time, especially as the next generations leave the Church, it will shrink anyway, but the hope is not so slow it causes a pension squeeze.