The Ox, Ass, and the Master's Crib

Christian artistic tradition has developed a standard manner of depicting Christ's birth in art, based on the accounts of the Gospels. The details may vary, but we recognize the different elements - a manger, the star, shepherds, angels, and of course, Mary and Joseph. In this post, I would like to focus on one of the more humble and overlooked elements of traditional nativity art: the animals.

In modern nativity scenes, we usually see a lot of sheep associated with the shepherds - camels show up closer to Epiphany to signify the journey of the Magi. But in traditional depictions, the ox and the ass are the default animals that always show up. You may not have noticed this - we don't often pay attention to the animals - but it is so common that constitutes its own particular design element. Consider the following examples, taken from the East and West: 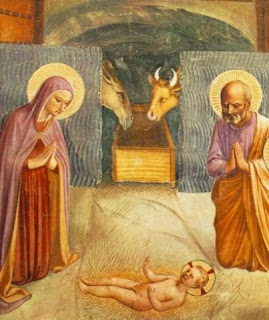 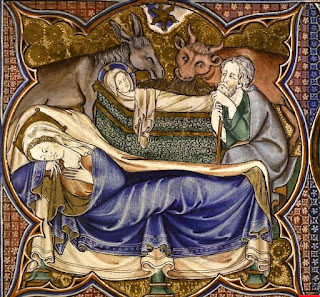 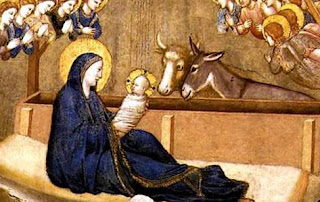 The last image is particularly striking; taken from the Fresco of the Nativity At the Church of the Holy Cross in Palermo, Italy, this image omits St. Joseph but takes care to include the ox and the ass!

This is very interesting given that neither the Gospel of Luke nor Matthew mentions the presence of animals at the Nativity, although they both mention St. Joseph.

Of course, the fact that no animals are mentioned does not mean they were not present;  St. Jerome's Latin Vulgate renders Luke 2:7 as: "et reclinavit eum in praesepio," which the Douay-Rheims version renders as Mary "laid him in a manger." The Greek text for St. Jerome's praesepio is phatnei, which is the Greek word for a manger, a feeding-trough for animals. It is certainly no stretch to assume animals were present.

However, the presence of the ox and the ass in particular are not explained by the datum of the New Testament, but by the prophecies of the Old. In the book of the prophet Isaiah, we read the following, in which God laments the infidelity of Israel:

"Hear, O ye heavens, and give ear, O earth, for the Lord hath spoken. I have brought up children, and exalted them: but they have despised me. The ox knoweth his owner, and the ass his master's crib: but Israel hath not known me, and my people hath not understood" (Is. 1:2-3).

The immediate context of this prophecy is the rebellion of Israel. God notes to the prophet that even a dumb animal knows who its master is. Anyone who has ever had livestock knows this - if you go out to the sheep with a bucket of grain,  the sheep will come right to your hand. They recognize their owner and come to him for their necessities. God notes this to Isaiah as a form of irony; a dumb animal intuitively recognizes its master and comes to him for his needs, but the very people God has called for His own are unable to recognize Him and refuse to come to Him!

Thus, when the ox and the ass are depicted at the manger of Christ, it is an allusion to Isaiah 1. The people of Israel did not recognize the Messiah when He came to them, but the ox and the ass are depicted reverencing Jesus as their Master. The fidelity of these simple animals to the Incarnate Word is contrasted to the infidelity of Israel, which the ox and the ass foreshadow. "The ox knoweth his owner, and the ass his master's crib: but Israel hath not known me, and my people hath not understood."
It is true that no animals are mentioned in the infancy narratives. But the ox and the ass in depictions of the Nativity were never meant to infer the historical presence of these creatures at the birth of Jesus. Rather, they are iconographic symbols - rooted in the Old Testament prophets - meant to tell us something about the divine identity of Christ and call us to humble submission to Him.

I have also seen it claimed, though the source eludes me at present, that the ox represents the circumcised and the ass the Gentiles.

"But the ox and the ass in depictions of the Nativity were never meant to infer the historical presence of these creatures at the birth of Jesus."

That's presumptuous. How do you know what the artist intended? I think that the medievals believed that animals were "historically present".

O great mystery,
and wonderful sacrament,
that animals should see the new-born Lord,
lying in a manger!
Blessed is the Virgin whose womb
was worthy to bear
our Saviour, Jesus Christ.
Alleluia!

The literal and allegorical readings are not mutually exclusive. The animals can both be there literally and at the same time have an allegorical meaning.

That's true. But I think the fact that it was not just animals in general but these particular animals infers it was a kind of iconographic symbol. I agree they totally could have been there though.