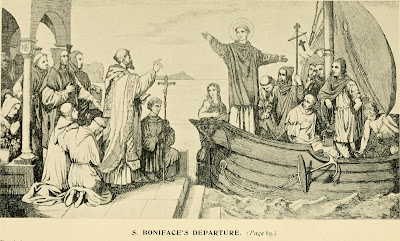 The ostensible reason the ordination of married "elders" is being discussed for the Amazon is because of a critical priest shortage in the region.

Let us set aside for a moment the fact that the ideologue of the Amazon Synod, Bishop Fritz Lobinger, has stated that the priest shortage is not the real reason for the proposal to ordain married men; let us look at the historical background of "priest shortages" in general.

The Amazon is more or less a missionary region. I do not deny there is a priest shortage there. But there have always been priest shortages in mission areas. How is this a new problem? Mission territories generally don't have the population density or Catholic base to produce a sufficient level of indigenous priests. This is why evangelical efforts in mission countries have typically been spearheaded by foreign priests supported by subscriptions or donations from the faithful in more thoroughly Christianized areas. This is just common sense.


I'm sure we could come up with many more examples. But the point is there have always been priest shortages in mission areas. The situation in the Amazon is absolutely not unique. In none of the situations listed above did anyone in the Church ever seem to think the solution was ordaining married men. Even in the case of New France, where Jesuits were being killed by Iroquois while simultaneously being expected to administer an ecclesial territory the size of Texas, there was no suggestion or ordaining married men, Jesuit novices were still required to put in years and years of training before ordination, and the speedy ordination of indigenous peoples was rejected—even though any one of those could have "solved" the problem by providing more priests to minister to the faithful.

But historically the Church has not viewed this as a problem that you solve by throwing more warm bodies into the grinder. Christendom was not built on the mentality of, "we need someone to do this job...meh, you'll do."

Of course, this is not really about a shortage of priests in the Amazon anyway. But...whatever.
Posted by Boniface at 3:13 PM

For better or worse I wouldn't consider any married person an ordained priest regardless of whether "church officials" declare them to be.

^So you don't consider traditional priest Fr. Vaughn Treco to be a real priest because he is married? That's kind of a ridiculous position to hold and not at all theologically correct

It's been almost 100 years since Pope Benedict XV issued is great Encyclical on the Missions, Maximum Illud. It remains a grave duty of missionary superiors to educate a native clergy -- no one ever talked about calling up married husbands. Only men with great love for chastity and mortification will be able to work in difficult missionary settings--St. Francis Xavier put especial emphasis on the former. Celibacy has always been something that was noticed by the natives when comparing protestant missionaries (who had wives) with celibate Catholic missionaries.

Btw, there was an indigenous Capuchin priest from Amazonia in the 1920's, who, it goes without saying, was not married. Unfortunately the Amazon River claimed his life early on. I forgot his name, he's somewhere in my missionary magazines.

Rome, being currently incapable of speaking forcefully for a celibate priesthood, and having only namby pamby or outright homosexuals among its ranks of priests and prelates( who also are disinclined to speak out for celibacy)- can do nothing but have converted Anglican priests do it for them.
What a pathetic spectacle the modernist church is.