Nimrod: A Mighty Hunter "Before the Lord" 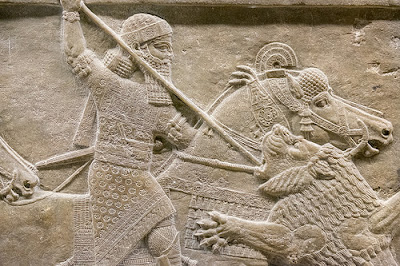 Last week I received an inquiry from a young man of Protestant background who is contemplating the claims of the Catholic Church. He had been listening to the Fr. Mike Schmitz through the Bible, in the course of which he encountered a difficulty understanding the figures of speech used in the Scriptures. This gentleman posed a question about consistent interpretation, using an example from Genesis 10:9-10. He wrote:

Way back in the beginning there was Nimrod, who was "a mighty hunter before God". It is explained [in the podcast] that "before God" is thought to mean "in opposition to God", which is kinda counterintuitive. Maybe five podcasts later, after blessing Abraham, God says to him "go before me". I doubt He is telling Abraham to oppose Him; he's actually telling him to be faithful to God. Why is "before God" in Genesis 10 taken to mean "in opposition to God" while the same concept in Genesis 17 taken to mean "be faithful to God"? One of the problems I have with modern religion is accuracy after multiple translations. Do you see now why I have reservations?

Here we have a classic problem of two similar biblical phrases being taken to mean different things. Such situations can raise questions about the integrity of a translation in particular, or the very plausibility of written divine revelation in general. Let's dig in to this question.

The phrase "before the Lord" in Hebrew is  ḡibbōr-ṣayiḏ lip̄nê Yahweh. This literally means something like "in the face of the Lord", according to my Hebrew concordance. The phrase can mean multiple things, just like in English. For example, a man who wants to say something important to someone he cares about might wait to "say it to their face" as a sign of respect. But the same phrase can denote insult or antagonism, like when a man says "I dare you to say that to my face!" The meaning has to be determined by the context and other cues other than the exact vocabulary.
Elsewhere in Bible we see the same variation of usage. In Galatians 2:11, St. Paul says "When Cephas came to Antioch, I resisted him to the face because he stood condemned", where the idea of acting "in the face of" denotes bold opposition. But elsewhere it can signify familiarity, as when St. Paul says "show to them the proof of your love and of our boasting about you in the face of the churches" (2 Cor. 8:24). Here, "in the face of" means "in the midst of" or "in the sight of" and is used as to communicate intimacy.

This really isn't problem with the accuracy of biblical translation; it's just how language is. Words have lots of meanings that require context to sort out. Heck, the English word "set" has 432 different meanings. The Bible, being written by men and utilizing regular human speech, requires the same sort of contextual approach to understand. The fact that various phrases mean different things in different contexts is what we would expect any time human language is being used normally.

In the verses cited, Nimrod's life "before the Lord" or "in the face of the Lord" is taken to mean he was brazenly bold in his opposition to God. The context is derived not from the text directly, but from a longstanding Jewish interpretive tradition, going back to the Midrash, Philo, Pseudo-Philo, the Book of Jubilees, Josephus, etc. who all assert Nimrod was a villain. It's not necessarily discernible from the text, but it is a reasonable interpretation of the it. The pre-Christian tradition is unanimous that Nimrod is a villain, and thus we read the phrase ḡibbōr-ṣayiḏ lip̄nê Yahweh to mean "in affront to the Lord" or "in opposition to the Lord." The Vulgate, too, followed this tradition, calling Nimrod robustus, that is, stout, bold, or haughty. The fact this young man finds such an interpretation "counterintuitive" in its English rendering is neither here nor there. Rather, it's an example of why you need tradition to help you interpret Scripture.

Context is also key in Genesis 17, the passage the interlocutor referenced about Abraham walking before the Lord. Abraham is unanimously portrayed as a faithful man and hero of faith in both Testaments and in Jewish and Christian tradition. Therefore the the phrase "before the Lord" with reference to Abraham gets a more benign reading, which makes perfect sense. The context, either textually or in terms of extra-textual of tradition, helps  establish the meaning.

Incidentally, the Vulgate preserves this contextual approach perfectly. It translates "before the Lord" as in coram Domino, which means "in the presence of the Lord." In coram is a neat little phrase that means "in the presence of", "in the midst of", or "before", as in the sense of "to stand before." As with the English phrase "in the face of" and the Hebrew ḡibbōr-ṣayiḏ lip̄nê, in coram can denote intimacy as well as opposition. In ancient Rome, a man marrying a woman in the presence of the family is said to be marrying her cum manu in coram gente, whereas a man found guilty of a crime before an assembly was said to be condemned in coram populo. In the former case in coram denoted intimacy and fidelity, whereas in the latter it signified opposition and antagonism.

Ultimately, there's really no reason to have reservations about the meaning of these texts anymore than there would be to have reservations about the way any regular human being uses language. I have previously recommended The Book of Non-Contradiction: Harmonizing the Scriptures as a handy guide to sorting out a lot of these textual questions. Anyone interesting in learning more about reconciling biblical passages with each other should check it out.