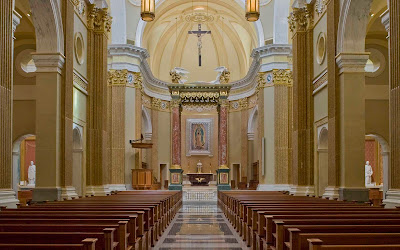 Recently I had the pleasure of visiting the Shrine of Our Lady of Guadalupe in La Crosse, Wisconsin. This beautifully designed neoclassical structure is situated on a forested hillside in a quiet neighborhood outside La Crosse. It was the creation of Cardinal Raymond Burke, specially dedicated by him to the patroness of the America. This structure was meant to reflect the liturgical ideals of the movement known as the "Reform of the Reform." The church itself is gorgeous; the altar is constructed in an Italianate style reminiscent of St. Peter's basilica, with a massive baldachin supported by four massive marble columns. The altar features the so-called "Benedictine arrangement" that was so touted during the last pontificate. A series of splendid paintings of various saints decorate the transepts, each situated over a reliquary altar of their respective saint. A sign in the narthex explains that all Masses at the shrine must be offered ad orientam and explaining that this is "really" how the Novus Ordo is meant to be offered according to the rubrics. It is an impressive place that elicits a sense of piety and grandeur.
I attended the 12:15 daily Mass, which of course was offered in the Novus Ordo. The contrast between the majesty the structure evoked and the realities of the liturgy being offered was stark. There was nothing amiss with the priest; he did a fine job, offering the Mass exactly according to the rubrics with worthy reverence. But the liturgy itself was so strikingly...informal. The banal dialogues, the Prayers of the Faithful with the scattered whispers of "Lord, hear of our prayer" squeaking out of the congregation, the casual language of the Eucharistic prayers. Of course this realization is nothing new, but I think the informality of the New Mass is thrown into relief when celebrated in a more solemn locale. The glory of the building shines a brighter light on the banality of the liturgy. The more splendid the church, the more unsuited the New Mass appears.
But I wondered if I wasn't being unfair. After all, a Low Mass offered in the Extraordinary Form wouldn't be much to look at either...right? Would I not find the silent, stripped down Low Mass as unimpressive in the same circumstances?

As I pondered this, I realized something about the traditional Roman rite: even though the traditional Low Mass is simple, it is never informal. A Low Mass is a rather simple affair: the priest approaches the altar, he works his way through the prayers (with the laity participating with whatever manner of quiet devotion seems best to them), and Sacrifice is offered, Holy Communion is distributed, and Mass ends. It is extremely straightforward. It is simple. But it is elegant. It is noble. It is dignified. The much touted "noble simplicity of the Roman rite" the liturgical reformers lauded was always present in the traditional Low Mass. It is a liturgy capable of rising to the occasion when offered in a glorious basilica—but also of elevating the occasion when offered elsewhere, like on the hood of a Jeep on a World War II battlefield, or a hastily constructed wooden altar in the wilderness of Brazil. It is a kind of simplicity that has a universal appeal, admirably reflecting the omnipresence of God whose glory is present in the grandest cathedral and the vilest slum.

When it comes to the Novus Ordo, however, the reformers fundamentally confused simplicity with informality. In seeking a "simplified" Mass, they crafted one that was shockingly informal. Informality in the way it addresses God, in the commonplace language of the prayers, in the gestures, in the way it clumsily drags the congregation into the dialogue-responses. It is an informality that is capable neither of rising to the majesty of a beautiful church, nor of elevating the surroundings when offered elsewhere.
Simplicity can still be grand. Informality is not. Simplicity can still lift us out of the workaday world and orient us towards God. Informality merely reminds us that we are still in the workaday world. The traditional liturgy never made the mistake of conflating simplicity with informality. It may have had rites that were simple, but they were never informal. Never humdrum. The Novus Ordo sought to create "noble simplicity" but instead created ho-hum informality and its progenitors were too inept to tell the difference.

The Shrine of Our Lady of Guadalupe in Wisconsin is an absolutely beautiful structure situated in beautiful surroundings. It is a place of beauty through and through. I wish it had more liturgies suited to the grandeur of the place.

There is a TLM still offered on Sundays I believe: at 9:30 am.