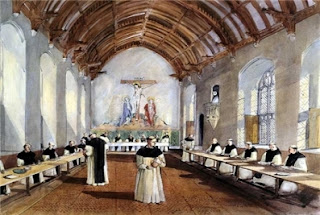 There is an unfortunate stereotype that traditional Catholic spirituality is a dour, mournful thing; that the medieval monks and ascetics were long-faced sourpusses whose minds were bogged down by the oppressive contemplation of their own sins, and who mistakenly thought that God's pleasure in them was proportional to the amount of physical, even masochistic suffering they imposed upon themselves—essentially, the stereotype that traditional Catholic spirituality is all cross but no resurrection.

Of course, you may occasionally find Catholics who are too pessimistic and dark about their spirituality. But traditional Catholic spirituality, whether of the monastic or lay sort, was always characterized by the paradox of profound joy in the midst of ascesis. Yes, our Lord tells us we must take up our cross daily. But He also promises that His yoke is easy and His burden is light (cf. Matt. 11:30). But the thing is you have to actually take up the yoke and carry the burden before you realize its lightness. And in what does this lightness consist? Not that following the Lord is "easy" in the sense of not requiring effort, but the sense that supernatural grace working alongside a docile will renders the burdens bearable, even sweet and delightful over time. For the novice, spending an hour in prayer can be tiring, dull and require extraordinary strength - in other words, it is a burden; for the saint, spending an hour in prayer is a delight, a consolation, a source of great blessing - in other words, the burden has been rendered light.
In the medieval world, the strictest observance of the Rule of St. Benedict was found among the Cistercians, those followers of St. Robert of Molesme who in 1098 broke away from the Cluniac usage to follow an unmitigated and primitive observance of the Benedictine rule. If anyone in the Middle Ages were dour, long-faced, sourpuss Christians, we would expect it to be the Cistercians, as the discipline of their early years was particularly severe.
There is no way to discern how joyful or mournful were particular monks who lived nine centuries ago, but we can tell something about how they viewed their monastic vocation by looking at the names they gave their monasteries. A striking feature of early Cistercian abbeys is their nomenclature, which demonstrates that the monks of the early 12th century viewed their monastic enclosures as havens of peace and joy. Let us look at the names of some of these early foundations from the first few decades of the Cistercian expansion. Notice all the references to happiness or goodness (variations of bonus) and light (variation of clara):
In France: Bona-Requies, Bonus-Locus (Bonlieu), Bonus-Portus (Bonport), Bona-Vallis, Carus-Locus (Cherlieu), Caritas (la Charité), Clarus-Mons (Clermont), Claritas-Dei (Clairté Dieu), Clara-Vallis (Clairvaux), Clarus-Locus (Clairlieu), Sacra-Cella (Cercanceaux), Sacer-Portus, Vallis-Lucida, Vallis-Paradisius (Valparayso).
In Germany: Caeli-Porta (Himmelspforte), Cella-Dei (Gotteszell), Schola-Dei, Vallis-Speciosa (Schoenthal).
In Belgium and Holland: Aurea-Vallis (Orval), Portus Beatae Mariae
In Poland: Paradisus (Paradiz)
In Ireland and Scotland: Beatitudo Benedictio Dei, Mellifons (Mellifont), Melrosa (Melrose).
In Italy: Fons-Vivus
Finally, a very popular phrase, Vallis-Dei, which was the name of several Cistercian houses in England, Ireland, Austria, Spain, Holland and even Norway.
And what do these names mean when we translate them? In vernacular English, the above names read:
Sweet Repose. Happy Place. Good Harbor. Lovely Valley. Beloved Abode. Brotherly Love. Bright Mountain. Brightness of God. Lightsome Valley. Serene Place. Holy Cell. Sacred Harbor. Vale of Splendor. Vale of Paradise. Gate of Heaven. God's Sanctum. School of God. Beautiful Valley. Golden Valley. Beatitude. Port of St. Mary. Blessing of God. Fount of Honey. Rose of Honey. Living Fountain. Valley of God.
The rule of the Cistercians, especially at their foundation, was by no means simple. To this day, the strictest observance of the Rule of St. Benedict is found among the Cistercian order, those of the Strict Observance (Trappists). To the world, the fastings, the vigils, the manual labor, the austerity could not possibly be sources of the joy and peace exemplified by the nomenclature of the Cistercian abbeys. And yet the monastic experience proves otherwise; it proves that our Lord was telling the truth when He said "My yoke is easy and my burden is light." Yes, to follow our Lord entails suffering, self-denial, and the carrying of the cross. But our Lord does not leave us orphaned; if we are willing to pick up that cross - willing to follow the Lamb wherever He leads—we find a sweet consolation, more tender and dear than anything offered by the world. We see that our Lord is a pearl of great price, and in our joy, we are willing to forego everything else to obtain that pearl, to drink from the living water.
And he who drinks from that living water will never thirst again (John 4:14).
This was what the early Cistercians knew, when despite the trials of setting up a new monastery, the difficulty in observing the Rule of St. Benedict, and the general conditions of medieval life, they found in their monastic profession a profound joy, as evidenced by the nomenclature of their abbeys.
"For the sake of Christ, then, I am content with weaknesses, insults, hardships, persecutions, and calamities; for when I am weak, then I am strong." (2 Cor. 12:9-10)
Posted by Boniface at 8:58 PM

In the book of Proverbs, Holy Wisdom says that those who follow her ways are joyful.