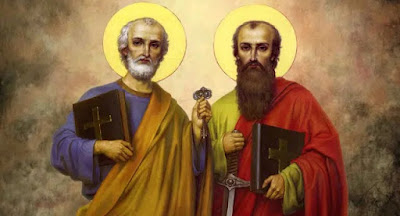 This year, the Feast of Sts. Peter and Paul, June 29, was the fifteenth anniversary of the launch of this blog. My plans for this anniversary went a little awry; I was going to announce a big launch of the new website, but of course, at the last minute there were some bugs and problems to smooth out. I held out till today but probably it's going to be a few more days until I can unveil it.
I was thinking about where the world and the Church was when I launched this blog—George W. Bush was president, we were in the middle of the Iraq War. Benedict XVI was only in the second year of his papacy; the big news was the Regensburg Lecture, which had taken place only a few months earlier. There was lots of gossip swirling on Catholic blogs about an imminent Motu Proprio coming down the pike that would change the status of the Traditional Latin Mass. Marcial Maciel had been forced to step down the year before I took up blogging; the same year I began, all the revelations about his filth began to become public, at least in the sense that people stopped defending him and for the first time there was a universal acknowledgment of what had happened.

It is strange to think that the entire Summorum pontificum era has come and gone within the span of time I have been blogging. When I began blogging there was a imminent sense that the freedom of the Traditional Latin Mass was coming soon; now there is the imminent sense that every month will bring a further blow against its adherents. The same problems still plague the Church: people are uncatechized, liturgical abuse is rife, the Vatican does nothing, bishops are by-and-large useless, and there is nothing new under the sun. But the mood is completely different; it feels completely adrift, alone in uncertain waters far off the chart, on the part of the map that says "Here be monsters." Maybe we'll get back home someday, but we will probably have to do a complete circumnavigation before we arrive, like the man G.K. Chesteron spoke of who walked around the entire earth only to arrive back at his own yard from behind, seeing it what is old and familiar from a strikingly new perspective.

Thanks for hanging in there with me, especially those readers who have been here since those early days of Benedict XVI's pontificate. I used to use this venue to complain. I still use it to complain, but I used to too. And I'm better at it now : )

Blessings and grace to you all
Uncle Boniface
Posted by Boniface at 8:37 PM

Congratulations! Thank you for your contribution and may God continue to use you as a light in the darkness.