The Latin Mass: Even the Homeless Prefer It 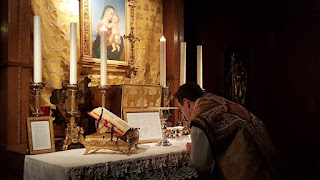 A certain diocesan priest I once knew operated a homeless shelter in one of the larger cities in the Midwest. It is a humble, welcoming ministry—the kind of that goes on patiently doing good largely unbeknownst to the outside world. Every day a constant stream of homeless persons file through, looking for a hot meal and a clean bed for the evening. There is no limit on who can come or how frequently. The only condition placed upon the poor for receiving this aid is that they attend one of the daily Masses offered in the shelter’s chapel, two Masses each day. One is contemporary Novus Ordo Mass with modern music and a minimalist liturgy, the other is a Traditional Latin Mass.
Initially, the priest assumed that the homeless, who were probably uneducated in the specifics of Catholic worship and theology, would choose the contemporary Mass because of its simplicity. To his surprise, the opposite proved to be true: over the years operating the shelter, the priest saw that most of the homeless chose the traditional over the contemporary Mass.
Intrigued by this trend, the priest approached one of the homeless men before Mass one day and asked him why he chose to attend the traditional liturgy. Did he know Latin? "No," said the homeless man. Then why prefer an elaborate Mass in a language you don't understand to one in the vernacular? The homeless man replied with reverence, “I might not understand all the prayers, but I know this Mass is all about God.”
The homeless man’s pious observation highlights an important truth about the liturgy of the Church: our liturgical rites have as their primary end the glorification of God. We may think we make the liturgy more accessible to common folks by stripping it down and simplifying it, but in the experience of this Ohio priest, the common folk preferred a more traditional Mass because it enabled them to have a more authentic sense of God’s transcendent majesty—they know it is “all about God.”
The modern Church has made much of the Eucharist as a reenactment of the Lord's Supper. This is certainly part of the Eucharist, but not all, and certainly not even the most important part. The poor man reminds us that just because the liturgy of the Last Supper might have been simple does not mean we should strive for minimalism in our liturgies. Jesus’ action at the Last Supper was simple, but the profundity of this action caused later generations to layer on additional elements of splendor in order to express its magnificence. Though the Last Supper itself may have been simple, the rites and externals of the liturgy that have developed over the centuries are meant to draw attention to the focal point of the Mass: the worship of God present in the Eucharistic mystery. These rites and externals, these layers of splendor, do not detract from the simplicity of the liturgy, but rather express its profundity.
The layering of rites in the liturgy fixes our gaze on God and opens us up to His grace. This liturgical act is neither purely individualistic nor entirely communal; rather it is a symphony of breadth and depth opening itself to the grace of God, mediated through the Church to the individual through its rites, prayers, and sacraments, and through the individual to the Church, which is built up by his personal spiritual growth. The liturgy of the Church is structured to facilitate this glorious exchange of grace.
Beautiful liturgies are important in expressing the magnificence of God. This is especially true when reaching out to the poor and homeless, where the beauty they find in the liturgy might be the only real beauty they encounter. If we really want to be going to the peripheries, this is where we should start. Like the man at little homeless shelter, beautiful liturgies help us all to understand the profound truth that the Mass is “all about God.”
"I thank thee, Father, Lord of heaven and earth, that thou hast hidden these things from the wise and understanding" (Matt. 11:25)
Posted by Boniface at 10:33 PM

Your article reminded me of this story. Not quite twenty years ago at the FSSP parish here, Our Lady of Mt. Carmel, a biker and his biker chick came into the High Mass. I certainly took notice. But most surprising was at the end of Mass the biker came over to the low choir loft and said to me in his rough, gruff, Hulk Hogan-type biker voice, "You guys sang that Gregorian chant like you were one voice."

A great compliment, especially considering the source. We need to get a lot more bikers to Mass!