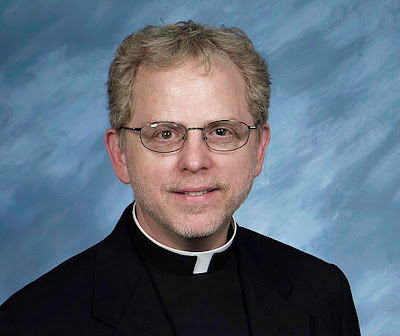 Fr. Paul Turner, Diocese of Kansas City, MO
I recently ran across an online article by Fr. Paul Turner, priest of both St. Munchin Church and St. Aloysius Church in Maysville, MO (diocese pf Kansas City). This article is not new (I think it was 2006), but it expressed what I would call the opposition view on Church architecture: that we ought to use the round, ampitheater model in our parishes, that we ought to have movable altars, etc. However, this priest goes a little further in saying that we ought to remodel or tear down our existing pre-Vatican II Churches because they do not conform to the spirit and practical necessities of the Novus Ordo Mass. On destorying or remodeling old Churches, Father Turner says:

"Still, very few congregations have had the courage to say something more theological: “We need to retire our old building because it does not permit us to celebrate the new liturgy in its fullness.” They will consider major surgery, but they may discover that the patient is beyond repair. Some buildings need to be retired because the sanctuary is too remote, the acoustic is too bad, communion under both forms is too difficult to administer, and the area outside the church is too small for the liturgy’s ancillary rites and processions. It has fallen to this generation to do something about it. Never before in the history of Catholic architecture has the church been faced with such a profound dilemma. .."

I find it particulalry interesting that he says the old Churches do not allow for the NO to be celebrated in its fullness. We can only imagine what he believes the "fullness" of the NO is. The reasons he gives for tearing down these old Churches are utterly trivial: bad acoustics, "remote" sanctuary (that's an ambiguous term!) and finally, "communion under both forms is too difficult to administer." Thus, the older Church is "beyond repair." Think about what this priest is saying: he would rather tear down an old Church than give up the optional practice of Communion under both kinds. I guess even our most treasured historic Churches are to be sacrificed at the altar of the "spirit of Vatican II." Let's see what else Fr. Turner recommends; for example, what if we decide we want to preserve our old buildings instead of tearing them down?

"Not to change our building may seem as though it honors the past, but it handicaps the present and hobbles the future. This old church has served us well, but history has selected our generation to make a difference in architecture that will help future generations pray. Centuries from now, people will look back on us and thank us for having the courage to change the course. Because we did, we enable our children and grandchildren to engage in all that Catholic worship has to offer.” Our generation needs to say that."

Haha! I think he is fooling himself if he thinks future Catholics will thank this generation for what it has done to the Church. I know that I am so irate with the previous generation of Catholic for what they did to the faith that I find it amusing that anybody would "thank" the V2 generation for these changes, but I guess everyone's entitled to their opinion. By the way, in this excerpt and the last, notice all the talk about the importance of "this generation" and modern man? How arrogant to think that we are somehow different or special from every other generation that has come before us! Look what Fr. Turner says about the aesthetic features of older Churches, like great acoustics, stained glass windows, hardwoord floors:

"That was then. This is now. We have electricity. We don’t need windows. We don’t need resonance. We have sacrificed what nature offers and created basement churches illuminated by neon and carpeted with polyesters. Some people blamed the new mass for the loss of a sense of sacred and the poor quality of prayer in many of our churches. But we have new technologies, and we have not always employed them well. The new mass probably rescued us from becoming completely lost in a world of artificial light and sound."

Rescued us from being lost in artificial sound and light? I don't know about that. According to Fr. Turner, the new Mass and the abuses that followed are not to blame for the loss in piety. No, he claims that this is due to the fact that we have not properly utilized technology. So what model does he propose we follow in integrating technology with our worship?

"Many nondenominational seeker churches are finding success through an aggressive use of electrically produced sound and light. Big screens allow thousands of people to watch small actions; electronic music raises the decibels and the heart rate. Far from resisting artificial light and sound, some churches are diving into it, and they are succeeding in drawing numbers and fulfilling the spiritual needs of many people. Catholic churches have resisted this movement, often with a lame and ecumenically offensive excuse such as “It’s too Protestant.” What should drive our liturgy is not what makes us different from other Christian believers whose baptism we should revere; rather, what should drive our liturgy is the kind of incarnational piety that gives the Catholic Church its juice. The people are ministers. Everyone has a part to play…But let’s face it, for centuries we have distanced people from participating at mass; we are only now inviting them to take a stronger role in singing and praying. But if we use the old models of church architecture, we can expect the old models of Catholic behavior to endure."

Grr...Okay, so Joel Olsteen, Rick Warren and Benny Hinn are to be our models then. Look, just because we revere their baptism doesn't mean they get everything right. I mean, c'mon, even a Seventh Day Adventist or a Pelagian can administer a valid baptism. I don't have anything else to say on this matter. I'm just glad I live in a diocese where at least our older Churches are revered as historic treasures and not slated for destruction just because they are old. Destroying the old because it is old is the most antithetical idea to Catholicism that I can imagine. Notice from the first paragraph that Fr. Turner is the pastor of two parishes. This means that parishes have been clustered or closed in his diocese. I guess the reforms are working great in his area. Yet he thinks the problem is that the "reforms" of Vatican II have not yet gone far enough. I"m not so much angered as I am shocked that these people still don't get it.
Posted by Boniface at 2:49 PM

This kind of drivel makes me madder than words can describe.

I have just one quibble with what you said though, Boniface - Fr. Turner in fact is not entitled to his opinion. As so many of the modern popes (prior to VII) consistently taught, error has no rights.

Poor Father. In a day and age when many are rediscovering the beauty and reverence of _ad orientem_ worship, he is still stuck somewhere in the '70s.

I note this interesting bit in his C.V., "He has served as a translator for the International Commission on English in the Liturgy."

I said he had a right to have his opinion, not a right to promulgate it.

What a shallow thinker. And he needs to shave that dreck off his face.

And people wonder why I want to leave the NO. Let's review. The Norvus Ordo is designated by the initials N.O., hence, Norvus Ordo Mass equals NO Mass.

And shortly, I will be home with the TRUE Roman Liturgy. Just to let you all know, the REAL Mass and REAL Church is in Detroit, for now. At least until someone removes their head from an inappropriate place and sees what the TRUTH is.

Sorry you feel that way Maurus. I guess you think many of the over 300,000 Masses said daily are being "not-said", and all those priests are sinning.

Abuse is one thing. Inventing norms is one thing. But if you think the consecration is invalid, then you have been participating and you might be committing idolatry. I don't think that is the case, is it? A "properly celebrated" N.O. is actually a very moving thing.

Don't fine tune your emotions or your theology to the point where they break. God has a handle on all of this......thank God!

What does the TLM celebrant tell you?