Rails not just for TLM 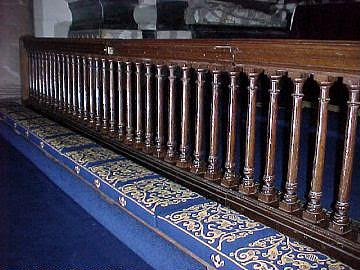 I recently went to a Novus Ordo Mass in one of the Detroit area's oldest and most venerable Churches. It was a large traditional building erected in the cruciform layout and was beautifully decorated in the neo-Gothic style that was popular in the 19th century. Running along walls on the upper transepts were beautiful pictures of the fifteen mysteries of the Rosary, while the dome over the apse contained seven images depicting Christ administering each of the seven sacraments (an excellent artistic reminder that sacraments are a work of God, not of man, and that it is Jesus Himself Who acts through the sacraments). The Church also had some other cool things: a devotional altar to St. Pius X, an outstanding collection of relics (incuding St. Francis, St. Clare, all of the Apostles, St. Bonaventure, St. Cecilia and many more) and a beautiful painting of the Assumption of Mary on the ceiling over the nave.

At the sanctuary, the Church still had its original high altar, which was about twenty five feet high with four columns and I think at least three statues adorning it. There was also a movable altar out front as well, but it was clearly an altar and not made to look like a table. Like many older parishes, this one still had the original communion rails.
When it was time to receive Holy Communion, I was shocked to see the entire congregation get up and move to the altar rails foir reception! A priest and a deacon quickly made their way up and down the line, administering under one species alone. I had never been to a Novus Ordo that used altar rails. Nothing else in this Mass was any different than your typical Paul VI Mass. It was all vernacular and celebrated versus populum (although I must say that this NO was done quite reverently and without any of the more flamboyant abuses so commonly found in NO masses). The line moved extremely quick and I knelt in the first available spot, and it was only ten seconds or so before the priest came to me, administered the Sacred Host and moved on.
I was very pleasantly surprised by this experience, and I think it breaks down two common myths about altar rails.
First, that they were only for the Traditional Mass and are not fitted to the new Mass. Perhaps that might be true given the way some choose to do the new Mass, but that is begging the question. "The altar rails are not fit for the new Mass because the new Mass is not fit for altar rails." Nonsense. On the contrary, this Mass reminded me that altar rails do not belong exclusively to the Traditional Mass and that they are fitting for a Novus Ordo as well, the same way that a NO can be (ought to be) celebrated ad orientem just as much as a TLM.
Second, the myth that reception at altar rails takes too long. I have to say, I think that the altar rails actually made for a quicker period of reception overall while allowing more time for individual reverence. Let me explain.
First, enogh people get up at once to fill the entire rail, which held probably fifty people. So a considerable amount of the congregation are up there right away. In this form of reception, the person remains stationary while the priest comes to them. Thus, you may have ten seconds or twenty seconds of prayer before the priest gets to you, and a few moments afterwards for personal devotion and thanksgiving. But meanwhile, the priest is moving right on down the line, and as soon as he gets done with one person, he can move to the next without having to wait for the person to move out of the way. Reception is as quick as the priest chooses to move. Now, when we have to come up to the priest in a line and the priest is stationary, he cannot administer to the next person until you move, and this necessitates the feeling of being rushed that many people experience in modern Catholic parishes when they go up for Communion.
Also, reception at the altar rail practically means (usually) reception under only one kind. This cuts down the time that a person needs to be up there. Also, as the priest moves along, spots continually open up and the whole parish is served in a very swift way, but each individual person finds that they have a few moments for prayer and thanksgiving. Imagine going up to a priest in a line and waiting twenty seconds before you received from him, then standing there ten seconds afterward praying while he impatiently waited for you to move so he could get to the next person. It'd never happen! Altar rails allow for simultaneous swiftness of administration but reverence in reception.
So, for those older parishes who are celebrating a NO and have altar rails, I'd like to remind you that altar rails are not just for the Traditional Mass and fit quite well with the NO if you are willing to implement their use.
Posted by Boniface at 8:36 AM

We need more churches that inspire.

Unfortunately, we get more that reflect the personal "tastes" of the one with the bucks.

Any movement on that score in your venerable old parish, Boniface?

I don't know. I am out of the loop. Rumors persist, but nothing has happened yet.

Strangely, altar rails and kneeling are the norm in the Anglican liturgy, too. Not just in High Church services, either. Anglicans receive both elements, too. You're quite right - it is fast enough to be efficient and slow enough to allow for reflection. And Anglicans don't even believe in transubstantiation.

Heck, I've even seen Baptists kneel while eating their crackers and grape juice, bless their souls.

I had never received at the rails before and I was surprised to see them used them at the Novus Ordo. It was definitely a lot faster.

But using the altar rails at all Masses makes the lines go so quickly that there's no need for EMHCs. It takes away the opportunity for laypeople to participate in the Mass. And we don't want to go back to the dark ages, right?

Out of curiosity, Boniface, what did the priest say as he was administering the Host? The typical "The Body of Christ" with the communicant saying "Amen" afterward? Or was it more along the lines of the TLM?

And I assume there was no Blood given to the communicants, yes?

It sounds so beautiful! I wish more NO Masses could have the reverence that one had! :)

How dare one consider taking away their "right" to communicate us.

How dare one consider stopping this abuse-made-norm concept of active participation.

Say you are sorry.... get down on your knees and repent. Just don't do it during communion.

The priest just said, "Body of Christ." There was no blood given to the communicants either.