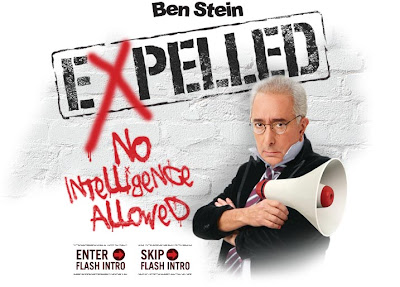 Yesterday I went and saw Ben Stein's documentary on Intelligent Design in academia, "Expelled: No Intelligence Allowed." I know many Catholics have shown interest in this film (it has been advertised on New Advent for the past several weeks) and it is especially pertinent because evolution is something Catholics are horridly confused on.
This movie is quite excellent and I can highly recommend it. It's only short coming is that it does not go far enough in debunking Darwin. The first half of the film consists of interviews with professors who were dismissed from their jobs for mentioning Intelligent Design. These were all high ranking and prominent doctors with excellent credentials; one who was interviewed, a Dr. Berlinski, had taught at Princeton, Stanford and many other of the most prestigous schools in the country. Many of them themselves had doctorates from Princeton, Oxford or Cambridge. All of the persons interviewed were fired for inquiring into ID. It is important to point out that they did not teach ID or expound it, but merely mentioned it as an existing hypothesis. The first doctor interviewd, Dr. Richard Sternberg, was fired simply because he reprinted an article from somebody else who mentioned Intelligent Design. These interviews revealed that a considerable degree of academic censorship exists within academia, something anybody on my blog should already know. But it is nice to see third party evidence confirming your views!

Ben Stein next examines the ethical implications of Darwinism in the second half of the movie, drawing an excellent and relevant connection between Natural Selection and Nazism, and demonstrating that Hitler and the Nazis were very much influenced by Darwin. Nazism is Darwinism followed to its logical conclusion, so the film says. Here Stein does an excellent service to all Americans when the film goes from Nazism right to a shot of a Planned Parenthood magazine. The whole sordid history of Margaret Sanger is exposed, with its eugenic and racist program, as well as its Darwinist origins, something Americans desperately need to know about.

Interspersed throughout the movie are interviews with several prominent atheists, like Richard Dawkins. It is amusing to see the other hypotheses they put forward to Ben Stein's simple question of how nature could, on its own, make the ontological leap from non-life to life. More than one said they thought that aliens could have "planted" life on earth. Another evolutionist thought that life originated on the backs of crystals; these are the alternate explanations offered by the most prominent Darwinists on how life began. To these absurd theories, Stein comments, "I thought I would get science by talking to these people, not science fiction." He also successfully exposes the anti-religious agenda of many of these atheist-scientists. One even calls religion "evil."

The only shortcoming of the film is that it lacks any criticism of Darwinism itself. Stein interviews tons of people who were fired for questioning Darwin, but does not himself demonstrate why Darwin should be questioned. He doesn't bring up the lack of transitionary fossils, or the fact that a textbook geologic column does not exist. We are left feeling that Intelligent Design should be more thoroughly investigated, but are not told what is so false or wrong about Darwin's views. If you are looking for a film to debunk evolution, this is not it.

But, I think that it was not Ben Stein's point to debunk Darwin. He was essentially trying to show two premises (1) there is an active academic persecution of those who question Darwin, and (2) Darwinism has agendas that go beyond simple science. As far as demonstrating these two points, this film is excellent.

Throughout the film, the image of the Berlin Wall is evoked as a metaphor: the wall is there to keep out threatening ideas, in this case, the idea that Darwin could have been wrong. The task this film attempts is to make people know that the wall exists, and warn us all where this type of censorship can lead us. I encourage everybody to go see this film.

I give it two out of three papal tiaras.

You have made several factual errors in your post. I will to correct a few.

You said "The first half of the film consists of interviews with professors who were dismissed from their jobs for mentioning Intelligent Design. These were all high ranking and prominent doctors with excellent credentials;"

This is not true. Of the five people interviewed, only Marks could possibly be considered "high ranking". Crocker was a part time instructor at GMU and a local community college, Gonzalez was an associate professor at ISU, Sternberg was merely an unpaid research associate at the Smithsonian, and Pamela Winnick isn't even a scientist, she is a reporter and author.

You imply that Berlinski was fired, but movie never stated this at all, and he was, in fact, never fired for his views on Intelligent Design.

Crocker has a PhD in immunopharmacology from the University of Southampton. Sternberg has two PhDs; the first from 1995 in molecular evolution from Florida International University, and a second in systems science from Binghamton University, Dr. Robert J Marks II
got his Ph.D.in Electrical Engineeringat Texas Tech University.

You said "All of the persons interviewed were fired for inquiring into ID. It is important to point out that they did not teach ID or expound it, but merely mentioned it as an existing hypothesis. The first doctor interviewd, Dr. Richard Sternberg, was fired simply because he reprinted an article from somebody else who mentioned Intelligent Design."

To correct some of the errors here, Sternberg was never fired. He continues to work as a researcher for the NIH at the Smithsonian. He was never fired from the magazine he referenced. His term as editor, an unpaid position was due to expire six months before the Meyer article was even published.

Please correct these errors. For more information go to www.expelledexposed.com

There is a book that talks about Evolution and has several references to why Evolution could not work. One is that genetic science can disprove it. If anyone is interested I can get the name and author. I read this some years ago and I must say that it does a pretty good job of placing the "Theory of Evolution" as a failed theory. And ID? Well, that leaves a lot of open ground. Aliens, previous societies, magic, hocus-pocus, poof and we have it. Sorry, got carried away. Everyone is so concerned with disproving that there is a God. Let's not get too wrapped up in that issue. Who really cares how He did it. The point is, is that HE did.

I wish an analogous documentary film was made concerning the DINOGLYFS or dinolits: http://www.helsinki.fi/~pjojala/dinosaur.htm
It seems that the ancient man not only saw but also documented the last megafauna (gigafauna, I should say).

It is thrilling that it is the People of the Book who once more are the initiative spectators who have the balls to question the ambient amen and go against the loudy majority. Not the first time. Here's some statistics and charts regarding the success of the Jews in science and technological innovations when the others were too stubborn to change their minds:
http://www.helsinki.fi/~pjojala/Indicator.html
Bruce Alberts first accepted from his post as the president of the National Academy of Sciences USA that the biological machinery can be called as such, machinery, without asserting to metaphora. He gave the students that license in 1998. Other animations on the tiny cellular machineries apart from the Expelled movie can be seen in here:
http://www.helsinki.fi/~pjojala/Videos_animations_flagella_evidence_existence_creation_contra_evolution.htm

Are these easy enough to digest:
http://www.helsinki.fi/~pjojala/Dinoglyfs.htm
?

How come you haven't answered to Mr Benjamin Franklin, Boniface?