Too much humility or too little? 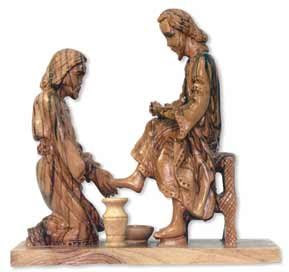 I have often wondered to myself, is the problem with people's spiritual lives (including my own) that we think too highly or that we think too lowly of ourselves? Everybody has an interior voice, a voice which consists of a continual commentary of everything we do and say. For some people, the voice is saying, "You are no good, you are a failure, you'll just screw up again." To others, the voice says, "You're the best, better than that other guy. You deserve all the credit." I wonder, which of the two is more common? More importantly, which of the two is more dangerous?
These days, it seems to me that modernist-conventional wisdom is saying that having too low and opinion of yourself is the more dangerous thing. There is a great solicitude, both in the world and in the Church, to make sure that everybody has positive self-esteem, is at peace with themselves and doesn't feel bad about the things they have done. Even if Confession is encouraged, we are admonished to forget all about our sins afterwards and be at peace with ourselves. Has any body noticed anything like this? This falls a little short of the secular-psychological insistence that we "forgive ourselves," but it is in thr same vein as far as promoting self-esteem as an unconditional positive good.
I tend to think that most people's problem is that they think too highly of themselves, at least that is the temptation for me. Furthermore, I think this is a bigger danger than the opposite defect (thinking too lowly of oneself), for several reasons:
Scripture: The Scriptures contain innumerable admonitions to be humble and abase oneself, but I cannot think of one place where they dissapprove of someone being too humble.
Spiritually: It is safer to be too low and have to be raised up than to be too high with pride and have to come down. As the Gospel says, "He told a parable to those who had been invited, noticing how they were choosing the places of honor at the table. "When you are invited by someone to a wedding banquet, do not recline at table in the place of honor. A more distinguished guest than you may have been invited by him, and the host who invited both of you may approach you and say, 'Give your place to this man,' and then you would proceed with embarrassment to take the lowest place. Rather, when you are invited, go and take the lowest place so that when the host comes to you he may say, 'My friend, move up to a higher position.' Then you will enjoy the esteem of your companions at the table. For everyone who exalts himself will be humbled, but the one who humbles himself will be exalted" (Luke 14:7-11).
Tradition: Let's look at what some Catholic authorities have to say about humility:
Catholic Encyclopedia: Defines humility as"A quality by which a person considering his own defects has a lowly opinion of himself."
St. Francis of Assisi: "Who are You, O blessed Lord, and who am I—Your servant and a worm of earth."
Pope Clement XI: "Give me, good Lord, a love of You, hatred of myself, zeal for my neighbor, contempt of the world."
St. Bernard: Defines humility as "A virtue by which a man knowing himself as he truly is, abases himself."
St. Jose-Maria Escriva: This saint's seventh sign of a prideful heart is "Not to recognize that you are unworthy of all honors and esteem, not even of the earth you walk on and the things you possess." St. Jose Maria Escriva
St. John Climacus: Referred to himself as "so miserable a sinner, destitute of every sort of virtue."

If these are the sort of things the saints said about themselves and about humility, who are we to water down their definitions, gained by spiritual insight after much penance, for the sake of appeasing modern pop-psychobabble?
There are many more examples than this, so many so in our Tradition that it is tedious to list them all. But, the Scriptures, principles of spirituality and the writings of the saints speak clearly: the ideal in Christian life is to have a lowly opinion of oneself, even to the point of contempt and disgust for our sinfulness, so that in this humility, Christ can tell us to "come up higher." Nowhere are we exhorted to forgive ourselves, worry about positive self-esteem, or be afraid of having a too lowly opinion of ourselves. Those opinions are novelties.
Posted by Boniface at 10:17 PM

St. Thomas nails this one (as usual)

What a beautiful and balanced definition! But he notes that it is "true" self-esteem, not just self-esteem for the heck of it.

Three cheers for St.Thomas. I swear, all other writers seem so muddled and confusing compared to him.

I'd add that we esteem ourselves correctly only when we know God. As Augustine said:

"Help me to know you and to know myself!"

Or as St.Francis said:

Or as Job said:

My ears had heard of you
but now my eyes have seen you.
Therefore I despise myself
and repent in dust and ashes.

I've read that humility is simply truth. If that's true, then I don't understand having too high or too low opinion of one's self? It seems we should be striving for the truth about ourselves.