Ark to be unveiled? Not so fast... 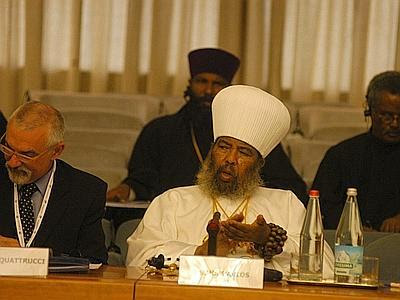 A few days ago I my attention was drawn to this article on World Net Daily, in which Patriarch Pauolos of the Ethiopian Orthodox Church reportedly stated that Ethiopia was about to make the Ark of the Covenant public, supposed to take place on Friday (June 24th):

"Soon the world will be able to admire the Ark of the Covenant described in the Bible as the container of the tablets of the law that God delivered to Moses and the center of searches and studies for centuries."The announcement is expected to be made at 2 p.m. Italian time from the Hotel Aldrovandi in Rome. Pauolos will reportedly be accompanied by Prince Aklile Berhan Makonnen Haile Sellassie and Duke Amedeo D'Acosta.

I was excited to hear the news, but skeptical that the Ethiopians would actually reveal the revered ark (if they have it). As it stands now, they keep seven deacons in the Church of St. Mary in Axum who will kill anybody who tries to get inside the inner sanctuary to view the holy object - that's right, kill. I was thus at first very skeptical that the Ethiopians would suddenly change their tune and decide to reverse centuries of policy of keeping whatever is in that Church a closely guarded secret. The announcement was supposed to be made in Rome on Friday afternoon.

Well, Friday came and no announcement. Then Saturday. And then Sunday. Something seemed fishy. Kudos to the blogger Richard Bartholowmew who tracked down a report from the Italian news agency Adnkronos, which was the source of the Ark story. Apparently, the rumor that the Ark was going to be revealed was based partially on bad translation, partially on World Net Daily's desire to promote a new DVD series on the Ark.

When one reads the original Italian, the mistranslation is obvious. What the Italian actually says is:

"I am not here to give evidence that the Ark is in Ethiopia, but I am here to say what I saw, what I know and I can testify."
Here is what World Net Daily reported:

"I repeat the Ark of the Covenant is in Ethiopia and nobody … knows for how much time. Only God knows."

A very gross translating error, one that has me thoroughly disappointed. I never really thought it would come out, but I perhaps entertained a glimmer of hope. Following the debunking of the WND story, they posted a follow-up, in which they accused the patriarch of "copping out" of his "promise" to reveal the Ark. Another source affiliated with the Ethiopian Church chimed in just to make sure the message was now unambiguous:

"I think Abba Pauolos must be out of his mind. … An (artifact) should not be shown or touched other than by the clergies but to put it on display is a reckless comment let alone doing it," the statement said. "Not only the local clergies but the people of Ethiopia won't allow it and it is not going to happen."

WND's mistranslation looks even less excusable when it was discovered that they are selling an Ark of the Covenant DVD set that is advertised in connection with the original story. The hype about the Ark spread so fast that the patriarch was forced to call a press conference on the 19th, in which he denied strongly that he had ever said what WND claims:

"I did not say that the Ark will be shown to the world. It is a mystery, an object of worship."

One thing suspicious about the article is the connection with the Pope and this announcement being made in Rome. It is very unlikely that the head of the Ethiopian Orthodox Church should do this in conjunction with any "conference" with Benedict: since even those members of the EOC cannot see the Ark, it is extremely unlikely that the patriarch would make this gesture to the Pope. Remember, the Ethiopian Orthodox Church is distinct from the "uniate" Ethiopian Catholic Church, which uses a Coptic Rite and is in union with Rome. The EOC is a monophysite sect that rejects the Hypostatic Union, claiming Christ has but a single nature. It seems very odd that a Monophysite sect that will kill even members of its own who try to gain access to the Ark would suddenly feel a sense of ecumenical coziness to Benedict that would cause them to suddenly back away from centuries of secrecy regarding whatever is in St. Mary of Axum. That would be a greater miracle of ecumenism than the reconciliation of the SSPX.

So, looks like we are going to have to be contended to wonder and speculate about what is in that room in St. Mary of Axum.
Posted by Boniface at 7:58 PM

So, if they actually did give a date of disclosure, which of these guys is a JW?

I bet what they are guarding is in reality the world's best espresso machine. Definitely worth killing over.