Today I was tremendously blessed to attend the ordination of a friend of mine from college at Ave Maria, Mark Rutherford, now Fr. Mark Rutherford. This was the first time I have ever been to an ordination and it was quite an experience - I will confess that I was very teary eyed at least four times, partially from the penetrating knowledge of what it means to become a priest, and partially from the fact of my old acquaintance with Mark and seeing somebody who went to school with and studied with going up to the dignity of the presbyterate.

Mark currently has a You Tube conversion story video that has been circulating for about a year and has gotten several thousand hits:

We got to the Lansing cathedral around 10:15 and were greeted by a bunch of protesters out front. The protesters were from some "Catholic" group demanding married priests and women priests. It was a pretty pathetic protest; I think no more than five. Most of the people going in to the ordination just stopped to laugh at the protest, and I stopped to click a few photos: 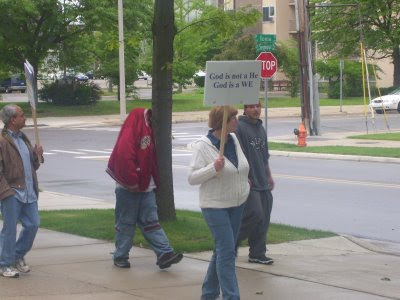 As you can probably see, this one says "God is not a He; God is a We." It is true that God is a Trinity, of course, but this in no way negates His Fatherhood. Well, whatever...it's a stupid misunderstanding and not worth refuting here. Here is a photo of a lady claiming that 39 popes were married - 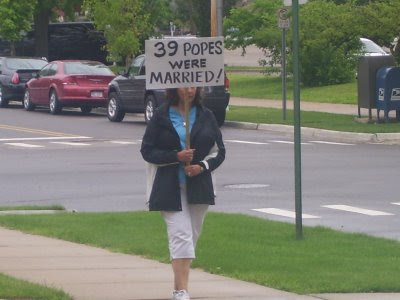 There certainly were a few popes who were widowers, and this could be a twisted reference to that, but I think mainly its just plain stupidity. Finally we have this humorous sign reading "Jesus was Inclusive!" ...in case you can't read the bottom, it says "Yes to RC Womenpriests." 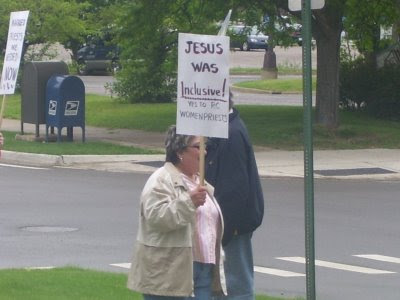 At any rate, I went into the cathedral and happily forgot about this riff-raff. The Lansing cathedral is pretty good as cathedrals go: it's got a nice neo-gothic look, stained glass, large and dominating cruicifix over the altar. The sanctuary area is a little minimalist, however; the altar is very table-like and the tabernacle is off to the side, but other than that it's not too bad a place. Here's a pic of the outside and then one of the sanctuary being prepared for the ordination: 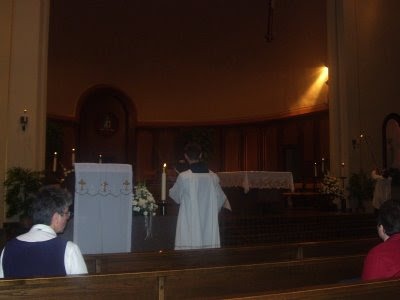 The musicial selection for the liturgy was quite good and the choir sounded extremely professional. Some of the selections included Mozart's "Ave Verum Corpus," the "Asperges Me" for the sprinkling rite, and I think I heard 'Adoro Te Devote" and "Salve Regina" being played instrumentally before the liturgy. After the laying on of hands, at this part where all the other priests of the diocese come by and pray over the new priest, the choir sung the "Veni Creator Spiritus" which was very moving. It went on for a while, so I managed to take some film of it:


There were a few things I didn't understand, probably because I know very little about how ordinations are done, either now or in the past. I always thought the form of ordination was something about the words "receive the Holy Spirit to offer the sacrifice of the Mass and proclaim the Gospel" or something like that; I know the whole controversy over Anglican Orders was that they had changed the words in their prayer. But at the laying on of hands, where orders is actually conferred and the sacrament is bestowed, the bishop prayed silently. In the program, it reads,

Our current bishop, Earl Boyea, is very trustworthy liturgically and used to celebrate the Extraordinary Form over at St. Josaphat in Detroit, so I know this is not an innovation on his part but is probably what the current rite prescribes in the Ordinary Form. He did mention the sacrifice of the Mass and the proclamation of the Word, but not until later when he was anointing the candidate's hands with chrism, but I don't think the anoiIt was my understanding that the form of a sacrament was always something audible, some kind of words vocally uttered. Can someone who knows more about this perhaps comment on it? (Please, no comments trying to prove that NO ordinations are invalid).

One other thing I didn't know about: in this rite, the bishop seemingly asks permission of the people assembled to ordain the candidate, as if it is up to the people. The program read:

Election by the Bishop and Assent of the People

"The Bishop, in the name of the Church, chooses him to be ordained. The assent of the People of God is required before a member of the Chuch can be ordained for service to the Church."

Was it ever part of sacramental theology that the bishop ordains priests by the assent of the Church? I know in the ancient times men were often chosen for Holy Orders by acclamation, but I am unsure how and if this was part of the traditional ordination rite. Does anybody know (1) If historically the bishop symbolically asked permission of the people to ordain, and (2) if ordinations pre-1969 were even open to the public?

At any rate, the whole thing was beautiful. I got really teared up when I watched the newly ordained Fr. Mark giving Holy Communion to his father - something about a son becoming a father to his father really chokes me up. It was a wonderful day, and I pray blessings on Fr. Mark Rutherford in his new ministry.

I was at the ordination, and this was my first one as well. I heard bishop Boyea mention the Sacrifice of the Eucharist and the sacrament of Reconciliation before the laying on of hands, and then he mentioned sacrifice again later during the anointing of Fr. Rutherford's hands. I checked into an English translation of the old Roman Pontifical at SanctaMissa.org, and the ceremony is the same order. The bishop lays hands on the candidate silently:

"When the litany is ended the candidates rise and go in pairs to kneel before the bishop. The bishop places both his hands on the head of each candidate in turn, without saying anything. This very simple though impressive action, unaccompanied by prayer or chant, is called the essential matter of the sacrament. It signifies that the power of priesthood is conferred by the bishop imposing hands on the candidate, transmitting to the latter the power which the bishop himself has received from Christ through the apostles and their successors."

I'm not sure he actually was supposed to pray a specific prayer at that time, like the program suggested. The essential form of the sacrament is stated later in a prayer.

As for your first question:

"In the first place the bishop addresses himself to the clergy and the people, consulting with them about the fitness of the men who are being presented for ordination. This is reminiscent of olden times when the custom prevailed of having priests and other clergy chosen by the will of the people. It must be kept in mind, then, that in the present discipline of the Church the people can merely raise objections, but it is the bishop who makes the choice."

This doesn't seem to indicate that he would ask the people for permission to ordain the candidate, he would only ask about his fitness for ordination.

This would lead me to believe that ordinations pre-1969 were open to the public.

Here is the website to the things that I quoted:
http://www.sanctamissa.org/en/resources/books-1962/rituale-romanum/40-the-sacrament-of-holy-orders-rite-of-priestly-ordination.html

I think that the liturgy went well, but I thought there was a little too much applause for a Mass.

Btw, I am Anselm's brother in law, just so you know the connection.

I was privileged to attend the first Mass of a newly ordained priest last weekend.

It is customary for another priest to give the homily, and that priest was the celebrant's friend from the seminary.

At the conclusion of the Mass, Fr Aaron called his parents up to the communion rail. To his mom he gave the cloth used in his ordination to wipe his hands. The cloth was hers and would be buried with her "....for you are the mother of a priest - forever."

To his dad he gave the stole from his first confession. It was his now and would be buried with him as a reminder that he is "...the father of a priest - forever."

Talk about goosebumps and teary eyes.

It was awesome.... and I was eligible for the plenary indulgence which accompanies that first Mass.

Thanks for doing some of the research. I just wanted to make clear that I wasn't criticizing the ordination in any way - I knew the bishop was following the rubrics, I just wasn't sure what the reason for them being that way was. It was quite beautiful, and I agree about the clapping.