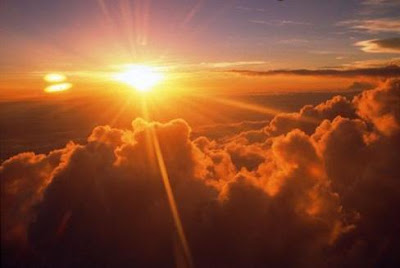 As with several of my other recent posts, this one is a spin off of my dialogue I am having with an atheist on Facebook. In our discussion of the question of God's existence, I brought up the issue of meaning in human life and how people are not satisfied with purely empirical, scientific answers to the mysteries of life. For most of human history, people have been more interested in asking why about the world, which is a philosophical question. This is a question about meaning and the value that we attach to finding meaning in our existence.
The atheist materialist, by definition, must reject any possibility of ultimate, transcendent meaning in the universe, either of the cosmos as a whole or of the lives of individual humans. If we do find meaning in our lives, this meaning must be something subjective that we project upon what we do, not something transcendent that comes from beyond us. The value we attach to finding meaning can likewise only have its origin in us ("It is important because it is important to me").

In the materialist view, meaning must ultimately be something read back upon the cosmos by humans, who take the purposefulness of their own inventions and actions and project it upon nature. For example, humans create hammers, and the hammer as a specific end, a purposeful meaning for its existence - this meaning is, of course, to pound nails. The fact that it is brought into being with a purpose in mind supposes a creator, which in the case of the hammer, is the human craftsman. So the hammer begins in the mind of the craftsman, who then brings the tool into being with a certain ultimate end in mind, Furthermore, the form and function of the hammer in its material creation are so constituted that they point to its end; i.e., even if you did not know why the hammer was created, you might be able to deduce this by looking at its design and material composition.

This leads us on to meaning - for just as the hammer is created for a certain meaning, a reason, this would lead humans to wonder what was the ultimate reason or meaning behind the universe? Why was it created? Furthermore, if the universe itself has a why to it, then the person in the universe seeks also to find the why of his own existence. However, for the materialist, these are ultimately futile questions - questions based fundamentally in a backwards projection of human purposefulness onto things that are inherently unpurposeful. For the atheist, asking why is there a universe at all or what is the ultimate meaning of my life is like asking how to draw a round square. Nature is ultimately meaningless in the philosophical sense; it is complex, beautiful and immense, but ultimately there is no reason why it should exist rather than shouldn't and no purposeful end to which it is tending. Of course, thie precludes any posisbility of invidual human meaning - we are all on our own in a meaningless universe; or, as Pink Floyd put it, we are all "lost souls swimming in a fishbowl year after year."

What, then, is the Christian's response to this? In the first place we have to understand the real question. The question is not "Is there meaning to life?" Both the atheist and the Christian agree that life has meaning. The difference is that the atheist says that this meaning is grounded in the subjective value of the person and flows from the alleged fact that there is no ultimate meaning. Since there is no ultimate meaning, each individual finds or creates meaning for himself out of a mess of meaningless experiences. Thus there is meaning, but it is grounded in the subject.

The Christian does not deny that this type of meaning exists and is important; for example, I still have in my possession a worn out old blanket that I used when I was young. The blanket has no objective value over other blankets other than the meaning that I attach to it. But the Christian does not say with the atheist that all meaning in life is of this sort; rather, the Christian acknowledges an ultimate or teleological meaning of the whole cosmos, that the world and universe were created for a specific purpose by an intelligent agent who had that purpose in mind when it was called forth. The Christian also asserts that his own individual life has a meaning or purposefulness; i.e., that there are some things I am objectively "supposed" to do and others that I "ought" not to do. I am a person living a meaning-oriented life in a cosmos which itself has purpose and direction. Most importantly, this purpose and direction is objective, inherent in life and the cosmos themselves, and does not have its origin in myself.

The Christian would also add that, since this meaning is inherent in reality, and since mankind is by definition a being who wants to know the truth, discovering the ultimate meaning about reality constitutes the greatest aspiration of mankind. Mankind wants to know the truth, and it is in seeking this truth in our time on earth that man is most fully human.

The question then is where we get meaning and whether or not it is important for people to find an objective meaning to life. We know the atheist objections - can the Christian counter-proposition be proven?

Now that we have the sides delineated and the questions defined, we will attempt to answer them in the following post.

Boniface, let me know if you would be interested in publishing this paper I have just prepared. I will also ask Athanasius.

The fine structure constant alpha is a dimensionless physical constant, whose value is completely independent from the units adopted for the physical magnitudes. It reflects a fundamental property of the universe and is one of a few dimensionless physical constants whose value is critical for the suitability of the universe to the development of life. Physicists have long speculated on the meaning of its value, which has been measured recently as 137.035 999 084 (51) for the inverse of the constant. From a Christian viewpoint, the integral part of the value has a straightforward mystical interpretation (1 for the divine essence, 3 for the divine persons, and 7 for the perfection of the divine works and gifts) which applies also to the significant digits of the age of the universe as currently estimated, 1.37 x 10^10 years. However, the validity of that interpretation requires that an equally clear interpretation be found for the decimal part, and specifically for the fact that it is not exactly 036. Based on the constraints from the historical references in the Christian Gospels for the dates of birth, beginning of public ministry and duration thereof, and crucifixion of Jesus of Nazareth, and assuming on mystical grounds that his circumcision took place at the same time of year in the Hebrew calendar as his crucifixion, we calculate Jesus' date of birth. Fixing the hour of Jesus' Nativity at midnight, which is perfectly compatible with the episode of the shepherds in Luke 2:8-20, we find that, according to the Julian and proleptic Gregorian calendars, Jesus died 8 hours before his 36th birthday, so that his age at the time of death was 035.999 087 solar years, using 3 digits for the integral part of the date as is appropriate for human ages. This number coincides exactly with the decimal part of the value of the inverse of the fine structure constant.

Re the post on the mystical meaning of the fine structure constant, in the end I decided to set up a blog. You can see it at

(The blog name is in Spanish but the article in English.)

It was certainly interesting for me to read the post. Thanks for it. I like such themes and everything that is connected to this matter. I would like to read more on that blog soon.