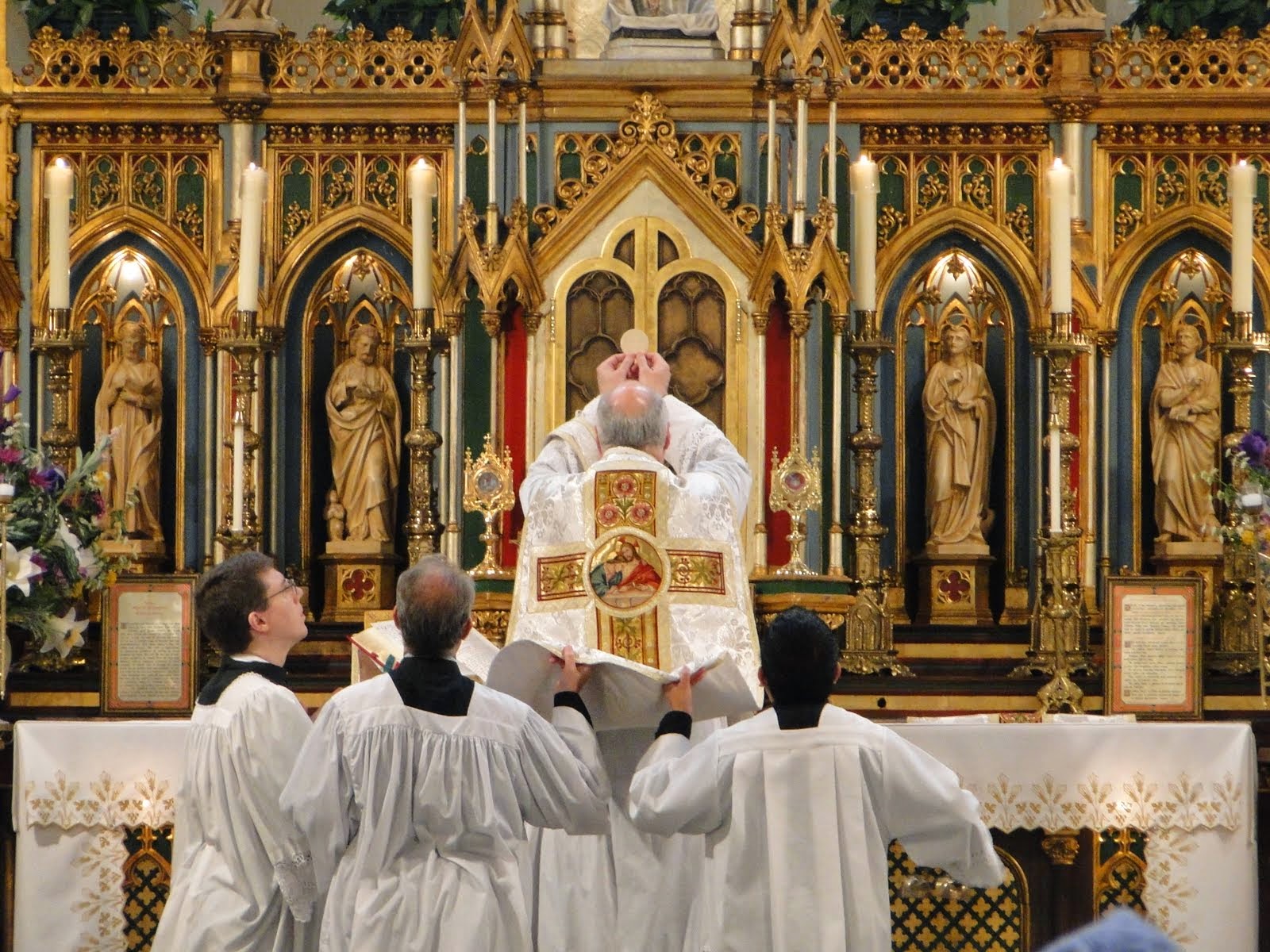 Too often, when every other attack by liturgical progressives has been exhausted, we get the absurd old argument trotted out that reverent celebrations of the liturgy are too triumphalist and unconcerned about the poor. This is a technique they pick up from the political left - that of attempting to establish a monopoly on care of the poor. Of course, everybody who is a true Christian cares about the poor. But if you do not care about the poor in the manner they think best, then you are accused of not being sensitive to the plight of the needy.


I didn't think this debate about who really cares about the poor could come into the discussion of the sacred liturgy, but it has been brought up by progressives who think that Masses that are reverent are too "vertical" and thus not concerned enough with human-to-human relations, especially relating to the scourge of poverty. There is very often a false dichotomy brought up between good liturgy and service to the poor - missionary priests preaching on behalf of the poor are often the worst abusers, and as mentioned above, those who care about reverence are accused of being cold to the poor. What can be said about this accusation?
I think we could not only answer this accusation but really flip it on its head: it is actually liturgical minimalism that injures the poor. In a 2004 conference at the Augustinianum in Rome, Cardinal Cottier stated that beauty was an important means of evangelization and hence not something merely aesthetic or "showy" that could be discarded without consequence:

"In order to fulfill the New Evangelization, we have two extraordinary means: beauty and novelty. The beauty of Christian heritage, which is constantly being rediscovered through all of Europe, and the always effacacious novelty of the Grace of the Holy Spirit" (29 Jan, 2004).

I would have chosen a better word than "novelty" to describe the movements of the Holy Spirit, but I get his point. At any rate, he says that it is the "beauty of the Christian heritage" which is leading to a rediscovery of the faith throughout Europe. To understand the argument for liturgical excellence, we have to see beauty as essential to the liturgy rather than extrinsic. This is not hard once we have established the liturgy as being principally about God.

Those who accuse traditionalists of being unconcerned with the poor seem to maintain two contradictory positions: on the one hand, they castigate the traditional liturgy for being too God centered. But then when they accuse a reverent liturgy of being unconcerned with the poor, it is like they are assuming that we are the ones for whom all of this is being done! In an excellent letter sent out by the priests of the Miles Christi order this month, Fr. Patrick Wainwright made an excellent argument along these lines:

"Why do we always want to insult the care, attention, and primacy given to God in the liturgy, attention truly set apart due to the detail of the gestures and the beauty of the sacred vessels and vestments? The priests are not the ones being enriched by using them, but rather it is God, to whom we tribute respect, who is visibly and publicly honored" (bold in original)

The excellence demanded of a reverent liturgy is not for the benefit of the priests, or for us (well, indirectly it is insofar as we are able to better participate in the liturgy). It is about worshipping God, and part of worshipping God should be coming into contact with mystery and transcendence, which human kind approaches through beauty. Thus, to deprive the liturgy of beauty is to deprive men of one the most common and universal means of approaching God.

Here's another great quote from Loïc Merian, president of the CIEL (the Centre International d'Etudes Liturgiques) on how this minimalism actually hurts the poor:

"When the Pope no longer appears elevated in the portable Throne, when Bishops are no longer clothed with rich adornments, when the Mass is celebrated in the language of the people, when Gregorian chant is consigned to the old-recording museum, and things of that sort, they have determined that the Church will there be the Church of the poor. That means, when the poor were deprived of the only beauty which they can freely access, which is known to be accessible to them, which is known to be friendly to them without losing any of its transcendence - as is liturgical beauty. When the ceremonies of the Church are debased, trivialized, and no longer evoke the glory of the Heavens, when those liturgies do not transport them to a loftier world, when they no longer lift them beyond themselves, when, to sum up, the Church has nothing but bread to offer them - and Jesus said that man does not live on bread alone. Who has told the poor that they have nothing to do with beauty? Who has told them that respect for the poor does not require offering to them a religion of beauty, in the same way that true religion is offered to them? Why are some so insolent to the poor denying them the sense of the sacred?...Is it the poor who cried out due to the waste when Mary Magdalen poured the oil of spikenard on the head of Jesus, even breaking the flask so that no perfume be saved?...What will the poor gain from all of this? Oh, they will lose everything!" (La Nef, May 2004)

When we minimize our liturgies in hopes of making them more accesible to the poor, we actually rob the poor of the one free access to beauty that they have available to them, and thus shut off another door by which the poor can come in contact with the divine mystery. Liturgically minimalist Masses do no good for anybody, neither the well-to-do, for whom it just reinforces them in their complacency, or the poor, for whose sake these are ostensibly carried out.
Posted by Boniface at 10:58 PM

Think of it this way, what beloved does not dress up and adorn herself to show her love for her lover? What man does not adorn his body in finery when coming to a great feast. People have lost the view of the encounter in the Mass of Christ and the Church, His Bride, and Christ and the Church, His Body. I think this is absolute silliness because poor people understand this stuff. If a poor man is treated justly by his brethren in Christ, you'd be hard-pressed to find a poor man who would not step to the front of the line to adorn the Church with beauty to honor God and aid his fellows in the worship of Him. What we need in minimalism is sin, and that will solve many poverty issues. I think a lot of these folks are busybodies who never read the part of the Bible about Judas and his money issues. And we all know that liturgical minimalism ultimately is just pronouncing the words of consecration!

The Friars from EWTN Echoed This Comment,When They Where Interviewed Last Year,At The Website:"New Liturgical Movement"