LCWR and the Reapers 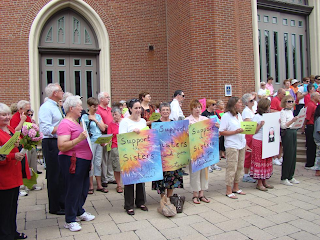 The following article is by Hilary White and is taken from LifeSite news:

"If they are not prepared to assert a more distinctly Catholic identity, the Vatican is prepared to oust the largest umbrella group of American nuns and sisters as the official representative and liaison with Rome, one of the Pope’s closest advisers said in a rare interview.

If the Leadership Conference of Women Religious (LCWR) refuses absolutely to cooperate with the Vatican’s attempt at reform, said William Levada, the cardinal prefect of the Congregation for the Doctrine of the Faith, they will force Rome to reconsider their position in the Church.

“If you look at the Church as a hierarchical structure—whether you see that as benign, or something else—ultimately, the Pope is the superior,” Levada said. “I suppose if the sisters said, ‘OK, we’re not cooperating with this,’ we can’t force them to cooperate. What we can do, and what we’d have to do, is say to them, ‘We will substitute a functioning group for yours,’ if it comes to that.”

Levada told US journalist John Allen that it is “premature” to imagine that the current LCWR leadership is to address the “substantive issues” brought up by a doctrinal assessment issued in April. Allen stressed the point, asking, “So if the response is not satisfactory, the result could be decertification of LCWR?” “It could be,” Levada responded.

LCWR is the organization, founded in the 1950s, that officially represents about 80 percent of the 57,000 religious sisters in the U.S. Their membership is not growing, however, and the average age of most of the sisters in the US is about 74 with many of the LCWR represented groups amalgamating or shutting down altogether.

Levada, an American prelate with decades of experience in US Catholic politics, knew that in addressing the National Catholic Reporter (NCR), the leading journalistic organ of the American Catholic left, he was directly addressing LCWR and their lay supporters.

Despite their claim to be “stunned” by it, the CDF’s doctrinal assessment, he said, was not sprung on them unawares. The CDF’s process started four years ago and LCWR’s leadership has been in close contact with Rome throughout."

This is good news, my friends. We can decry a lot of what is going on in the Church and world, but I am happy that Benedict has turned his eye towards the state of the women religious in this country. It is a very ancient strategy, dating back to Gregory the Great and Augustine of Canterbury and even earlier to the Irish monk-saints: get the religious life of a nation in order first and then the Church and people will fall into line afterward. Properly ordered religious communities have done more throughout history for the spread of the Gospel than anything else. This is a wise strategy on the pope's part - and, if I may say, this is the sort of thing that desperately needed to happen under John Paul II, who basically let this stuff go on and fester for decades. It is a good sign that the pope is pursuing this action.

This also followed up with the message Benedict delivered to the Church this week when he used the story of Judas to illustrate the point that it is better for Catholics who do not really believe the Church's teaching to just be "honest" and leave the Church altogether. Levada is not insinuating that he hopes the nuns of LCWR will leave the Church, of course, but he does state that if the LCWR will not do the job, they will substitute them with a group that will. That's awesome.

There is a great sorting out going on here. It is getting tougher and tougher to be a wishy-washy Catholic. The faithful are being sifted from the unfaithful. Liberal Catholicism is wilting with the passing of the baby boomers and turning into something that cannot even remotely be considered Christian. It reminds me of the parable of the sower, and the angels who come to reap the harvest, gathering the wicked and the elect. Here, through this process of sorting, the LCWR and their kid are being reaped out of the kingdom.

And it is bigger than just what is going on with LCWR or even liberal Catholicism in general. I'd venture to say it is a movement of the Spirit that is eschatological in nature, although we are witnessing only the first stirrings.

"So the servants of the householder came and said unto him, "Sir, didst not thou sow good seed in thy field? from whence then hath it tares?"

He said unto them, An enemy hath done this. The servants said unto him, "Wilt thou then that we go and gather them up?"

But he said, "Nay; lest while ye gather up the tares, ye root up also the wheat with them. Let both grow together until the harvest: and in the time of harvest I will say to the reapers, Gather ye together first the tares, and bind them in bundles to burn them: but gather the wheat into my barn."

As therefore the tares are gathered and burned in the fire; so shall it be in the end of this world. The Son of man shall send forth his angels, and they shall gather out of his kingdom all things that offend, and them which do iniquity; And shall cast them into a furnace of fire: there shall be wailing and gnashing of teeth.