The Alleged Catholic "Obsession" with Homosexuality and Abortion 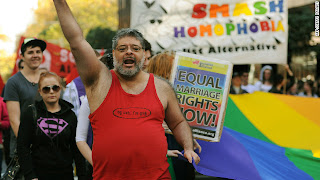 The Congregation for the Doctrine of the Faith's Doctrinal Assessment of the Leadership Conference of Women Religious (LCWR) has predictably found some serious defects in the LCWR's role of representating the women religious of the United States. The crux of the CDF's statement is that there are "serious doctrinal problems which affect many in Consecrated Life. On the doctrinal level, this crisis is characterized by a diminution of the fundamental Christological center and focus of religious consecration which leads, in turn, to a loss of a “constant and lively sense of the Church” among some Religious."  In other words, women religious no longer see themselves as Brides of Christ.

From this "diminution of the...Christological center" of religious life comes other inevitable diminutions and omissions, especially as regards the Church's teaching on life issues. The document says:


"[W]hile there has been a great deal of work on the part of LCWR promoting issues of social justice in harmony with the Church’s social doctrine, it is silent on the right to life from conception to natural death, a question that is part of the lively public debate about abortion and euthanasia in the United States. Further, issues of crucial importance to the life of Church and society, such as the Church’s Biblical view of family life and human sexuality, are not part of the LCWR agenda in a way that promotes Church teaching. Moreover, occasional public statements by the LCWR that disagree with or challenge positions taken by the Bishops, who are the Church’s authentic teachers of faith and morals, are not compatible with its purpose."

So the positions of the LCWR with regards to the Church's life issues are deficient, and hence, they are rightfully chastised by the CDF for it, among other things. Yet, when the CDF exercises its rightful function of passing judgment on whether a Catholic organization is following Catholic dogma, we instead hear the accusations from the progressives and modernists that the Church is in error for condemning these trends among the LCWR and that the CDF's statement reveals how "obsessed" the Church has become with the issues of abortion and homosexuality.

This nonsense about the Church "obsessing" over life issues and sexual sins is quite a common refrain among the enemies of the Catholic faith. It is protested that Catholics are singling out abortion and homosexuality as worse sins than others. "If the Church would devote the time and resources it uses attacking homosexuality to combating alcoholism, poverty or child abuse, the world would be a much better place." The Church's single-minded, obsessive focus on the "life issues" distracts her from adequately loving the poor and attending to other important corporal works of mercy. Anti-abortion and anti-homosexuality have become the Church's core teachings, our opponents suggest.

The tactic of playing social justice issues against life issues is a stupid false dichotomy, as any devout Catholic or anyone who actually does love poor people and the unborn at the same knows. But this argument about the Church's "obsession" with life issues is interesting. It is true that the Church in the United States probably spends more time and money defending traditional marriage and the rights of the unborn than on any other issues. But does this fact mean that we Catholics are "obsessed" with these issues and see them as the most important Catholic teachings?

Here's the thing. YES, there are lots of other Catholic teachings, and YES, there are lots of other sins; alcoholism, poverty and child abuse are certainly very serious problems that need to be addressed. But (and this is a very serious but), no one is out there trying to redefine the evils of alcoholism, poverty and child abuse and trying to turn them into positive goods. There are no such groups as the "Society for the Promotion of Alcoholism" or the "Child Abuse Supporters Network." There are no mass protests of people chanting, "More poverty! More poverty!" No one is redefining theft as a virtue, or advocating for lying as just one of many acceptable forms of communication, or touting the benefits of drunkenness. In none of these cases is society moving to redefine sin into goodness or vice into virtue. The secular world, by and large, still understands alcoholism, child abuse, et al to be evils, or at least socially undesirable.

But, supposing for the sake of argument that there was a massive public outcry to promote child abuse; suppose that there did exist numerous large, national organizations, well staffed and well funded with important political connections, who were lobbying for tax-payer funded liquor for alcoholics or the abolition of laws against perjury and the promotion of lying as an acceptable form of communication. Suppose we lived in such a world where such things were common. If that were the case, then you can be sure, the Catholic Church would be in the forefront of the fight against such social evils. Bishops would be speaking out against drunkenness, there would be homilies on the virtue of honesty, a whole slew 501 (c) 3 lay organizations dedicated to promoting the welfare of children and combating the pro-child abuse crowd, and there would be a whole market created for pro-sobriety bumper stickers. If these sorts of vices were being redefined as virtues in the manner that abortion, homosexuality and euthanasia are today, then I am positive that Catholics individually and the Church collectively would counter this assault on truth with a campaign as equally vigorous as the one being waged against abortion in this country.

But of course, nobody is proposing to promote drunkenness or redefine lying as a virtue. But people are in fact doing this with abortion, homosexuality and euthanasia, three acts that the entire Western Tradition has seen as gravely evil and depraved until relatively recently. In these cases of the life issues, we do in fact have a society-wide attempt to redefine as positive goods things that were unanimously understood to be evil.

Thus, it is certainly not that the Church is "obsessed" abortion, homosexuality and euthanasia; on the contrary, it is our corrupt culture that is obsessed with redefining the morality of acts that have always been viewed as evil. The Church is not attacking a particular point with any special vehemence; it is simply putting its finger in the dyke at the point of the leak, or deflecting a specific blow aimed at a specific spot on the Body.

If the society will stop redefining immoral acts as moral, I'm sure the Church would stop "obsessing" over the redefinitions. If the state would stop legislating on matters that are ultimately moral and not at all political, then the Church would happily "stay out of politics." But unfortunately, the redefinitions continue and legislation in favor of popular support of immoral actions continues, and so the Church must continue to fight and educate on the life issues and stand firm to maintain its right to pass judgment on the morality (or immortality) of actions of government. What people presume is a Church attack from one direction is really a Christian counter-offensive to a secular onslaught from the other; and society is too blind to see it.
Posted by Boniface at 9:30 PM

Why are you so angry?

I would not say I am "angry"; I am baffled that people want to redfine this one sin as no longer being sinful.

Fr. Matthew says, "Why are you so angry?"

The good Father is no such thing. That was an attack and nothing else. We must pray for him.