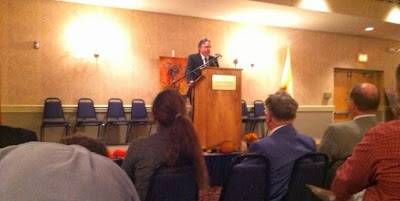 This weekend I was blessed to be able to attend the 2013 Catholic Identity Conference in Weirton, West Virginia. I normally don't go to these sorts of events, as usually the money and time are not available. But, thanks be to God, I was able to find some time and fund the cost of the trip entirely from the proceeds from the Unam Sanctam website (before you start thinking I am making a ton of money, let me rephrase that to say that attending this conference exhausted the proceeds from the website). And who could resist the lineup of speakers? Chris Ferrara. Michael Matt. Michael Voris. John Vennari. John Rao, and many more. I have neither the time nor the competence to comment on every talk I heard, but I will summarize a few that really stuck with me.

Michael Matt of the Remnant (pictured above) gave a very thought-provoking synopsis of the current state of the traditional Catholic movement. The crux of his talk was that we need to start moving from a subjective to an objective defense of the traditional Mass and traditional Catholic piety. Too often we are content to say that we "prefer" the traditional Mass because of its beauty, because of how it ministers to our spiritual needs, etc. These are all great reasons for loving the old Mass, but they are ultimately subjective. There are very real objective arguments for Catholic tradition, arguments that still maintain the validity of the Novus Ordo while pointing out that the equal validity of the new and old liturgy does not mean strict equality. These arguments have already been laid down in their basics by Fr. Ripperger and summarized here by my at-large co-blogger Anselm. He also argued passionately for traditional Catholics to close ranks with each other, despite differences of opinions on many important matters, as well as with any Catholic who can honestly profess the Creed, in the interest of promoting tradition in a more positive manner, so that, in his words, the traditionalist movement no longer resembles "a firing squad arranged in a circle."


John Vennari's talk was on something I have spoken of before, precision of language. He noted that in Catholic tradition, one spoke about man's condition on this earth and a struggle between two "kingdoms", the Kingdom of God and the Kingdom of Satan (or, per St. Augustine, the City of God and the City of Man). These cities are in irreconcilable conflict, and to be saved, one must be translated from the Kingdom of Satan to the Kingdom of God. He contrasts this precise language with the more common but vaguer notions of the "Civilization of Love" versus the "Culture of Death" and opined on the insufficiency of the latter formulations. There is nothing particularly Christian about the "civilization of love", and this phrase lends itself to misunderstanding as a kind of loose union of Christians with all people of "good will," which in turns lends itself to a diminishing of the idea of conversion and translation from the kingdom of darkness to the kingdom of light.

Michael Voris of Church Militant TV gave a talk on the homosexual crisis within the Church. His presentation consisted of a crosscut view of several dioceses around the country and their respective problems with homosexuality. The picture he painted was appalling. He tells of one story, related to him by a priest of the Archdiocese of Detroit, who stated that he refused to attend the Archdiocesan Christmas parties anymore because "he was sick of getting introduced to priests' boyfriends." The situation in Detroit is not unique. His research, culled from countless interview with priests and diocesan employees from around the country, reveal a picture of diocesan bureaucracies firmly under the power of the homosexual lobby. Given this fact, the assertions that the Church is not in crisis or that there is no problem with homosexuality in the Church are laughable.


As a side note, I want to mention that during the intermission, my friend and I had the opportunity to buy Michael Voris a drink and sat chatting with him in the lounge for over an hour. He was wonderfully down to earth, gentle, extremely humble, and not at all the bitter demagogue he is reputed to be.

Chris Ferrara gave a talk on the current state of quantum physics and its relation to Thomistic philosophy. While this talk was far too technical for me to summarize adequately here, the gist of the message was that the current knowledge we have of quantum mechanics actually confirms an Aristotelian-Thomistic worldview. The problem of the "indeterminacy of matter" (that particles and the quantum level seem to fluctuate between being a wave or a particle, being here or there, moving or not) that plagues quantum physicists is due to the fact that physicists do not understand quantum particles in terms of the prime matter of Aristotelian hylomorphism - that is, matter in a state of pure potency without any act. This state of pure potency explains why they are so indeterminate; they do not have the "form" to put them into act. Science thus far as been unable to explain why matter at the quantum level is indeterminate but possesses stability at the classic-Newtonian level. Ferrara posited that this was due to the fact that form, which puts the matter into act, is not empirically verifiable, but is imposed on the matter by God.We had a chance to chat with Ferrara for awhile afterwards about Austrian economists ("slippery fellows", according to Ferrara) among other things.


James Vogel spoke representing the Society of St. Pius X. I do not follow what goes on with the Society, but I thought Mr. Vogel represented them very well. The crux of his talk was this question: The SSPX has been known over the past few decades for their criticisms of some of the documents of Vatican II, which the Society believes are problematic. Mr. Vogel stated perhaps 5% of the teaching of Vatican II was questioned by the Society. However, since more and more people are beginning to look more critically at the documents, even critiquing them for ambiguity or discontinuity (as Athanasius Schneider and Walter Kasper did), why is the Society still in an irregular status for affirming the same things that many people in good standing are beginning to affirm?

I also had the chance to meet a couple readers of this blog in person, which is always cool. I also snapped this funny picture of John Vennari sleeping in a chair during the intermission: 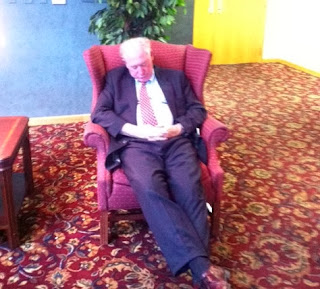 Thank you for the Synopsis!

"I had the opportunity to buy Michael Voris a drink and sat chatting with him in the lounge for over an hour. He was wonderfully down to earth, gentle, extremely humble, and not at all the bitter demagogue he is reputed to be."

I second this having seen Michael in Perth not long ago.

John Vennari has an excellent range of informative cd's available on the Catholic Family News site and usually they discount them down to $5 if you wait a bit. One of the best is on the Life and Prophecies of Blessed Elena Aiello.

It would be interesting and provocative to listen in on that debate between the subjective and the real objective views amongst the defenders of both forms .
In his newly published book True Reform: Liturgy and Ecclesiology in Sacrosanctum Concilium, Massimo Faggioli narrates Paul’s response when his philosopher friend Jean Guitton asked why not concede the 1962 missal to breakaway Archbishop Marcel Lefebvre and his followers. Paul responded:

Paul knew that permitting the old form would be not only divisive but would call the whole council into doubt.

Boniface, has your views softened on sspx re your prior conviction that the society is in schism?

I have been thinking about this a lot, and I can't seem to get past the fact that John Paul II said plainly that they were in schism. I can see the strength in the argument, "If we are in schism, how come X,Y and Z super-liberal prelates are not?" That is a strong argument, but at the end of the day, I come back to thinking that the question isn't the status of X,Y or Z, but the status of the SSPX, whose status is determined (in my opinion) independent of whatever may be the case with X,Y or Z. They are clearly irregular, as even their own spokesperson said, so I don't really know what kind of irregularity they are in if not schism, especially since JP2 used that language. I guess I simply don't know, but I still suspect they are.

Thanks for your honesty. I don't know myself but I do like to think that one day they will be vindicated somehow and be of great use (in a real sense, they are today)to the church - someday!