On the Term "Extraordinary Form" 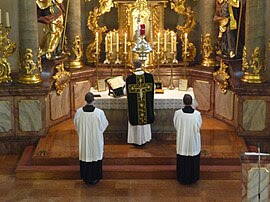 Hello Boniface,
I have an issue with the term "Extraordinary form" which I have not been able to resolve. First, as far as I can tell, the word "extraordinary" has a very specific theological meaning, and could be considered a theological category. The fact that both the TLM and non-clerical ministers of the Eucharist are referred to as 'Extraordinary" seems to imply, and I really can't see how this could be interpreted otherwise, that we should have as few EF masses as we have extraordinary Eucharistic ministers. On one hand, we could take that to mean we can have EF masses everywhere, because almost every novus ordo mass has extraordinary Eucharistic ministers, but on the other hand, we have to admit that extraordinary eucharistic ministers are a problem, and really should be much less common than they are, which would seem to imply that the EF mass should be rare too. Can you help me resolve this mess???

I detest the use of Extraordinary form, since it is applied to Extraordinary Ministers. The TLM was never abrogated, to me the Novus Ordo is an illicit indult.

How about Gregorian Rite or Classical Roman Rite? Remember that such a term encompasses not only the Mass, but also the Divine Office as an integral part of the Liturgy, as well as the other Sacraments. This is mainly directed against the use of "TLM" or "Tridentine Mass". I totally agree with your assessment of these terms.

Despite the many terms for the Traditional Mass they all fall short in one way or another.
I've been tending to use EF more lately, personally I view the 2 forms 1 rite idea purely as a legal construct, one which is helpful when dealing with mainstream NO parish administration to set up Masses.

In advertising for Masses and such I use TLM as the uninitiated don't know what any of the other terms mean.

In conversation with people offline, I tend to say "Traditional Latin Mass." You'd be surprised how many Catholics have never heard of Summorum Pontificum and thus don't know what EF even stands for. Almost everyone knows what you're talking about if you say TLM.

,,First, the phrase does not denote that both rites are equal or that the Novus Ordo does not have serious issues. The term denotes only that there are two expressions of the Roman Rite''

Precisely, this IS a problem – because the construct ordinary / extraordinary form, or the two expressions of the Roman Rite / of the same lex orandi, does mean that there are no serious essential defects in the NO, and in the end, that the NO is Roman Rite, which same Klaus Gamber to whose work Card. Ratzinger wrote preface, demonstrated that the NO is a serious break with tradition and can not be considered a Roman Rite, but rather 'Ritus Modernus'. The fact that there may be minor problems as you suggest, in my opinion, misses the point because it doesn't grasp the essential question – whether or not the NO as such could be considered Roman Rite. In face of all objective facts and examinations, as Cardinals Ottaviani and Bacci as well as mons. Gamber have stated, it could not, and this is a distinctive Traditionalist position without which all dispute is left just to a matter of ‘preference’ and ‘spirituality’, as it seems that the ED communities, knowlingly or not, are articulating their positions (in their practical limitations of not being able to state openly their positions if they want to obtain a permission from a Bishop to enter a certain diocese).

Which were the motives and real positions of Pope Benedict in face of his other previous statements, is a very complex question – was it some sort of unclearness in his thought, was it a practical solution in face of the opposition of the Bishops, we could go in long disputes, but the fact is clear, that the Motuproprio SP does present the Traditional and New Rite as being doctrinally, liturgically, spiritually, aestethically of same value, which is as I stated, absolutely unacceptable for a Traditionalist and the constant using of the EF term by itself implies the acceptance of such statement and it also is not acceptale for a Traditionalist.


,,Second, just linguistically, "Extraordinary" can signify "out of the usual" or "not normative", but it can also signify "Better than ordinary", such as "This work is of extraordinary quality." Whether or not Benedict XVI meant the term in this latter sense, it demonstrates that there is no inherent equality in using the phrase Extraordinary Form. We could even argue that it implies an inequality.’’

Term ‘extraordinary’ in this case refers to the practical spreading of the specific (Traditional in this case) rite of Mass, and as such isn’t problematic (and only in this sense yould we speak about inequality), but it is inseperately connected with the second phrase – Roman Rite, as also with the other term attached to the NO – Ordinary Form. So here again we come to the whole issue which is treated above, that the SP presents NO & TLM as two differents forms of the same rite, having a same doctrinal value and soundness, which is clearly unacceptable. For the meaning: "This work is of extraordinary quality.", there is no trace of being implied in the vaguest sense and it would be a pure twisting of words to consider it as such.

Unless you can show me that Summorum specifically affirms that both forms are equal, I will have to disagree with you.

,,If we are maintaining the validity of the NO Mass, I don't think we can suggest it is not some expression of the Roman rite. If you want to deny that, fine, but that is a different argument.''

The validity of the NO in no way implies it being substantially identical to the traditional Roman Rite. In a rite with clowns, dancing girls and no priestly vestments the consecration could well be valid but it also wouldn't be Roman Liturgy. I concur with the assessment of Cardinals Ottaviani and Bacci as well as mons. Gamber, that the NO is a radical departure from the Traditional Roman Rite, to which the term 'EF of Roman Rite' presents an opposing statement. There are many who wound want, for the sake of peace, to hide that fact, but I think it is pretty obvious and we have to sincerely consider and accept it - that the statement of NO & TLM being expressions of the same rite (or in other words - NO being the Roman Rite) goes against the reality of things and it is incompatible with Traditionalist positions.