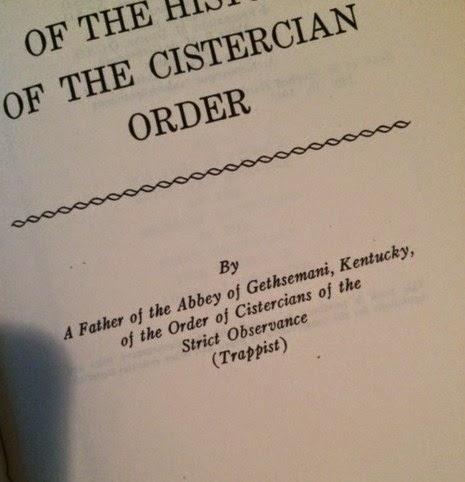 I know this is kind of apples and oranges here, but when I reflected on the humility of this priest who consented to undertake this massive tome anonymously - thinking what he said more important than who was saying it - my mind could not help leaping to a contrast with something more modern.

I know things are different for a religious than a lay person...I know a television show is different than a book...I know there could be evangelical benefits to such a show, and I know this woman probably has the best of intentions.

"I know a television show is different than a book..."

That's the problem. She's making a tv show and writing a book...no humility there. And we see the husband only in the second half, and we know he's a husband because he says "wife". She's definitely not wife material.

Well, let's not presume to know who is and is not "wife material." People who know me personally might doubt if I am husband material.

Well, as you say, a lot depends on the subject. The book on the Cistercians, i presume was about the Cistercians. They were the subject, so it makes sense that the writer is anonymous. The show seems to be essentially a conversion story or a "day in the life of a convert", the subject being the convert. Kind of hard to do that anonymously.

I know you are right about that.

But...still...eh...something rubs me the wrong way about a "reality show" about MEEEEE being the best way to go about things. Call it a gut feeling.

"The show seems to be essentially a conversion story or a "day in the life of a convert", the subject being the convert. Kind of hard to do that anonymously."

True--but why initiate or participate in such a show at all? (Yes, I am aware, of course, that it could lead to more conversions (let us hope and pray!); but it could also lead to an increase in the "convert/media- catholic narcissism," that has hurt Catholic life over the last 20 years).

I don't doubt that it will be used to make Catholics look stupid, and will portray converting from atheism as foolish or medieval. After all, it is promoted by Verizon and Time-Warner, both of whom are deeply involved in the "gay rights" issue.

My brief impression is this woman won't even notice.

it could also lead to an increase in the "convert/media- catholic narcissism,"

Well, in the age of selfies, that is certainly a risk. I don't particularly plan to watch it and don't know much about Jen, so don't know how much of a risk it is in her situation.

If it were a convert here and there with interesting stories who were invited to tell them in books or shows that would be one thing, but in the church today there's a conversion story industry. There's a particular language they all have to use, drawn from modern apologetics circles, so that they get the book deal, the radio and tv interviews, and possibly a career writing "catholicism for our generation" pop theology.

In my own conversion I know I was edified by other people's stories. There's obviously a place for these kinds of stories. The issue is not this or that individual convert making it all about them and their struggles, but the Catholic media industry that is always looking for the next convert personality to give instant celebrity.