Medjugorje: The End is the Beginning 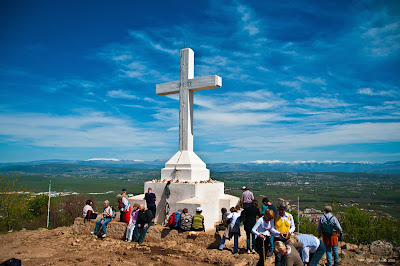 The day has come. It has been announced that the CDF's long-awaited judgment on Medjugorje is negative (source). Of course, Pope Francis has yet to sign off on the judgment, but it is presumed he will.

The judgment on Medjugorje has now come down from the highest authority; no more waffling by Medjugorje adherents; no more ignoring the repeated condemnations of the local ordinaries while maintaining glibly that "the Vatican has not made any ruling." The Vatican has now made a ruling. And it does not bode well for Medjugorje. Medjugorje has been weighed in the balance and found wanting. "The Lord has done this, and it is marvelous in our eyes" (Ps. 118:23).

It will be extraordinarily interesting to see how this plays out. We can only hope for the following:

1) That the Holy Father Pope Francis will sign off on the judgment of the CDF.

2) That Medjugorje devotees will accept the decision with docility and invest their time and efforts into other Marian Messages such as Fatima and Lourdes.

3) That anti-Medjugorje Catholics (such as ourselves) will not gloat...well, maybe a little gloating.


That is the best case scenario. May the Holy Spirit make it so! Yet, there has always been worry that, were Medjogorje ever condemned, the Medjugorje supporters would not adhere to the Church's judgment but rather would continue promoting the alleged apparitions in a state of blatant disobedience or possible schism. The apparition has already been characterized by disobedience to the local ordinary. Anyone who has really studied the history behind Medjugorje cannot fail to see that disobedience and division are the only real "fruits" of this apparition (cf."Understanding the Herzegovina Question", USC).


How likely is an outright schism? I do not see this as extremely likely. Yes, Medjugorje people can be a little eccentric, but the vast majority of them are decent Catholics who would never break with Rome over something like this.

I do not see an out and out schism as likely. But I do not see the confusion abating. In fact, the likelihood of the confusion continuing is exacerbated by a very troubling statement allegedly found in the CDF statement. Catholic Culture reports that the CDF document will:

"...urge recognition of Medjugorje as a special “place of prayer,” in light of the numerous reports of intense spiritual experiences enjoyed by visitors there. Pilgrimages to Medjugorje will not be forbidden, provided that they do not center on the alleged apparitions."

If the CDF has authoritatively decided that there is nothing supernatural going on a Medjugorje, by what rationale ought it to be designated a special "place of prayer", or why anyone would want to make a pilgrimage there if it did not center on the alleged apparitions? The CDF reportedly says the rationale is that it recognizes Medjugorje as a "special place of prayer" not based on on the credibility of any apparitions, but "in light of the numerous reports of intense spiritual experiences enjoyed by visitors there."

My suspicion is this is a compromise arrangement. The Vatican realizes that the apparitions and messages of Medjugorje are prima facie absurd and indefensible. There's no way they can be approved without the Church looking completely idiotic. And yet, because so many millions of people go to Medjugorje - and because of the ostensible pious experiences of those people who go - the Vatican is hesitant to crush the smoldering wick or break the bruised reed. It fears the reaction of the Medjugorje lobby.

Therefore, lest these millions of Medjugorje fanatics adherents go into schism, fall away from the Church, or become even more distanced from the faith, the Vatican wanted to find a way to formally express its disapproval of the apparitions while allowing the pilgrimages and activity at Medjugorje to go on unabated. The ground has merely been shifted. "Look, go to Medjugorje all you want. Pilgrimage there. Stare at the sun there. Talk about the mystical experiences you have with our Lady. Just don't mention the apparitions; go there because of the way it makes you feel."

Of course, it could be argued that the Vatican cannot exactly prohibit Catholics from praying anywhere they want, so long as they are not promoting the apparitions. In fact, Scripture commands Catholics to pray not only always but everywhere (1 Tim. 2:8). The Vatican cannot say, "And henceforth nobody is to ever go to Medjugorje and pray."

Granted. But the Vatican could just say nothing. They could just say, "There is nothing supernatural going on at Medjugorje and it is prohibited to promote the apparitions." Period. There is no reason why the negative judgment needs to include a clause which urges recognition as a special place of prayer, let alone based on people's intense personal experiences. The only reason people had intense experiences is because they thought they were visiting an apparition site. Thus, the potential CDF wording does not distance the pilgrims from the apparitions; it merely distances the Church's judgment from the objective to the subjective, from the verifiable to the experiential.

The safety of defaulting to experience is that nobody can ever argue with an experience. We may be able to now authoritatively state that the apparitions are not supernatural in the objective sense, but who can argue against somebody's experience? Thus, while having the appearance of a condemnation, the Church may have in fact just abdicated its role here entirely by shuffling the whole ordeal off on to the shoulders of individual Catholics who now can decide in their own conscience whether it is worth it to go to Medjugorje based on an evaluation of their own "intense spiritual experiences."

Now, I pray it does not go down that way. I pray the Medjugorje adherents are docile and that somewhere down in their sensus catholicus they say to themselves, "Why the hell would I spend thousands of dollars to fly over to Medjugorje to celebrate my own experiences?" Hopefully the whole thing withers and dies.

But the pessimist in me doubts it. The pessimist realist in me worries that the CDF will leave an out for those who want to continue patronizing Medjugorje. That part of me worries that while Medjugorje remains officially condemned, in practice it will go on unabated, now no longer in disobedience but in an official space created for it by the wording of the CDF judgment. It will allow the Church to affirm one thing while doing another.

The pessimist in me sees it as nothing other than the Kasper doctrine under another guise.

4) That I no longer have to rip up advertisements for it from the Church bulletin and put the remains back in the plastic pocket.

Found on the pro Medj. site SpiritDaily: http://crownofstars.blogspot.co.uk/2015/06/vatican-insider-rebuts-claims-of.html
Who knows, this may play out longer than you think. All manner of scenarios can be dreamt up with the eventual outcome of a major schism.

There may well be something supernatural going on at Medjugorje - of the infernal variety!

I always thought that the church dose nor give credence to the alleged apparitions, but that the reported message was consistent with church teaching, only then would a cultus be permitted. My problem with medjugorje is the massive volumes of alleged messages spanning many years and that some are not consistent with church teaching, and some contradict previous messages????.

Go, instead, to the Shrine of Our Lady of Good Help in New Franken, Wisconsin [near Green Bay.]

Our Lady of Good Help's is the FIRST and so far ONLY apparition in the United States approved by the Bishop and the Vatican. It's as legit as Lourdes, Fatima, and Guadalupe, and just as awesome.

Learn the story of the apparition and the miracles that Our Blessed Mother did for devotees there [healing the sick, saving the area from the most devastating fire in US history, and protecting the faithful from the onslaught of the evil schismatic group called "Old Catholics" that was plaguing the area.]

Our Lady had truly appeared in the U.S., in Wisconsin, in the late 1850's [a few years after her apparition at Lourdes.] I'm sure you'll find her shrine so conducive to prayer and meditation. It's Our Mother's house and garden, right in the middle of the farmland.

The Wisconsin seer was a humble country girl named Adele Brisse, who obeyed the request of the Blessed Mother that she gather the children in the area and teach them the Catechism. This she did, in all kinds of weather, even offering to do housework for families in the area in exchange for having their children come to be educated in the faith.