My First Attempt at Catholic Writing 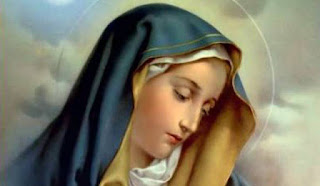 I was a cradle Catholic in the sense that I was baptized as a baby. But I never was taken to Mass, never made a First Communion as a child...in fact, I never even knew I was Catholic until I was an adult.

I had a powerful conversion to evangelical Protestantism in 1999, when I was 19 year old, but almost immediately saw the flaws in it and began exploring Catholicism in 2000. I was converted solely through historical and theological reading and was received into the Church on October 4, 2002, the Feast of St. Francis of Assisi.

From the very beginning of my conversion, I was filled with a zeal to share the good news I had received with others, especially Protestants I knew who loved the Lord Jesus but did not know about the fullness of faith in the Holy Catholic Church.

Last night when I was cleaning out some old boxes, I cam across an essay on the Blessed Virgin Mary I wrote in June, 2002, which was actually before I was even received into full communion. The essay was supposed to be part of a longer "book" meant to explain Mary to Protestants. The particular essay was entitled "The Role of the Woman in God's Salvific Plan." It was, essentially, my first foray into writing to defend the faith, though three years before I'd ever heard of blogging.

It is a rambling essay, and very theologically unsound; in fact it contains some serious errors. But the language is flowery and it has a charming style that is pleasant to read. I thought it would be fun to scan it and post it here; you can see my edits in several places where I'd planned on making revisions. It is 12 pages long. It's just funny for me to see how I was writing when I was 22.

CLICK HERE TO READ "ROLE OF WOMAN IN GOD'S SALVIFIC PLAN", MY FIRST (and certainly not last) ATTEMPT AT CATHOLIC WRITING/APOLOGETICS
Posted by Boniface at 7:19 AM