St. Louis on Propriety in Dress 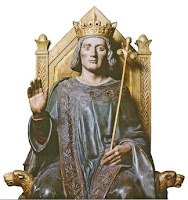 We read in Joinville’s Life of St. Louis that at Whitsunday the saintly King of France happened to be feasting with his knights at Corbeil. A dispute arose between Joinville, the king’s Seneschal, and some other knights over a matter of the propriety of certain kinds of dress:

“One Whitsunday the saintly king happened to be at Corbeil, where all the knights had assembled. He had come down after dinner in the court below the chapel, and was standing at the doorway talking to the Count of Bretagne, when Master Robert de Sorbon came to look for me, and taking a hold of the hem of my mantle, led me towards the king. So I said to Master Robert: ‘My good sir, what do you want with me?’ He replied: ‘I wish to ask you whether, if the king were seated in this court and you went and sat down at a bench, at a higher place than he, you ought to be severely blamed for doing so?’ I told him I ought to be. ‘Then,’ he said, ‘you certainly deserve a reprimand for being more richly dressed than the king, since you are wearing a fur-trimmed mantle of fine green cloth, and he wears no such thing.’

‘Master Robert,’ I answered him, ‘I am, if you’ll allow me to say so, doing nothing worthy of blame in wearing green cloth and fur, for I inherited the right to such dress from my father and mother. But you, on the other hand, are much to blame, for though both your parents were commoners, you have abandoned their style of dress, and are now wearing finer woolen cloth than the king himself.’ Then I took hold of the skirt of his surcoat and of the surcoat worn by the king, and said to Master Robert, ‘See if I am not speaking the truth.’”

At this point the king gets involved with the dispute, along with his two sons, taking first one side, then the other, in a discussion about the propriety of clothing, especially among men of authority and high rank and how much is too much. The king eventually takes the side of Joinville, admitting that it is right for a man of rank to dress according to his rank, and that it is not fitting for him to dress lower than his station out of some misguided sense of humility. He concludes with this advice:

“’As the Seneschal [Joinville] rightly says, you ought to dress well, and in a manner suited to your condition, so that your wives will love you all the more and your men have more respect for you. For, as a wise philosopher has said, our clothing and our armor ought to be of such as a kind that men of mature experience will not say that we have spent too much on them, nor younger men say that we have spent too little.’”

St. Louis is advocating moderation in clothing, neither spending too much money on clothing that it is ostentatious nor spending so little that one looks meager. But notice that moderation for St. Louis is governed by station in life. Always dress with moderation, but “in a manner suited to your condition.” A prince or prelate or person in authority does not exercise moderation by abandoning the dress and symbolic vesture of that authority. A man must dress according to his station, “so that your wives will love you all the more and your men have more respect for you.” The implication is that respect is diminished when a man does not dress according to his station.

Yes, moderation must always be exercised, by St. Louis’ point is that moderation looks different for those in different stations in life. Merely pretending we are not at one station by adopting the dress of those of a lower station is not humility.

Related: Humilty and Stations in Life


Click here to purchase Chronicles of the Crusades, containing Joinville's "Life of St. Louis", quoted in this article. There are used editions starting at one cent.
Posted by Boniface at 2:29 PM

Have you read Tolkien's "Farmer Giles of Ham"? He wonderfully belittles the courtiers trifling about fashion while a dragon terrorizes the countryside.

I don't mean to undermine the importance of the topic though - it just reminded me of that great little book.

There might be a link here to the current custom of 'dressing down' by priests while saying Holy Mass. If they are acting 'in persona Christi' should they not dress like Christ The King? Some might say that as Christ came as a poor working man and dressed appropriately, a polyester priest is doing the same thing. However if Christ is Our King - King of all including states and persons who refuse to worship Him - priests should dress accordingly. So bring on the silks, silver and gold and all beauty for our Priests.

I had previously been unaware of this enlightening discussion. Such amazing things I learn about in this sphere. Is it not problematic then, that right now our merchant class and our political class dress EXACTLY the same. In fact, I'd wager the suits of politicians are a darn sight more shabby than tradesmen! Just an example of how our aesthetics follow the greater decline that we experience in Modernity.

Our priest recently enforced a dress code for Holy Mass.
He said exactly what you are saying,almost verbatim.
Men are to wear suits & ladies must wear dresses below the knee with a head covering.
Afterwards,I realized how it was disrespectful of me to waltz into the holy sacrifice of the mass in a casual button shirt and dark dress pants.

Are you serious? It's not as if suits and ties are some divine ordinance.