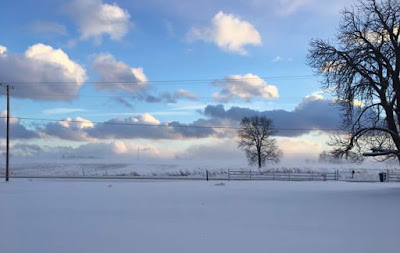 Peace and grace in Jesus Christ our Lord!


As you may know, I have been on an extended vacation since November. When I decided to take some time off, I was stressed out, overworked, and had to rectify a lot of chaos in my personal life. It's been almost three months, and a lot has changed since then. Am I still stressed? To some degree. Still overworked? Oh yes. Still a lot of chaos? Yes, but much less so. I feel things are much more ordered now than they were in the fall and I am feeling a lot happier about life in general.

Ergo, I'm going to announce my official return to blogging - tentatively at least. I offer no promises on how frequently I will post, but I definitely am starting to feel the bloggy itch again.

What have I been doing with myself these past three months? A lot. Living life. In many respects, I've been doing things I should have been doing a long time ago. I do not want to go into a lot of detail out of fear of sounding virtuous, but essentially I've been working on just trying to be a better Christian in the ever-changing circumstances of my life. I've been able to spend more time with my children; I've made unexpected friendships with people I never would have probably been open to befriending before; I've stepped outside my comfort zone and engaged with people suffering from all manner of problems, sometimes being able to offer valuable help, sometimes having to stand by helplessly while I watch them destroy themselves. I got caught up writing letters to old friends. I've been able to attend to my health more and am in the best shape of my life. Rectified a lot of issues in my personal life that needed attention. And I've learned many valuable lessons about grace, honesty, love, and humility.

Professionally, things are going better than they've ever gone. Spiritually, I suppose I am responding to the continuing crisis in the Church by enfolding myself further in my own spiritual life - on letting Christ be formed in me, and worrying less and less about following up with the latest cluster at the Vatican. Earlier this month, a certain neo-Catholic apologist contacted me and asked me to participate in a debate with a well-known theologian on Amoris Laetitia and whether Francis is a good pope or a bad pope, in which I would represent the "traditionalist position." Aside from noting that what constitutes a "good" or "bad" pope can be riddled with subjectivities, I had to tell him I was not interested, because I had not even followed the debate. I haven't read Amoris Laetitia, and not following the controversy around it, I am not competent to argue about it. I'm just...past the point where I see what is going on in Rome as vitally connected with my own day to day walk with Christ.

Yes, my friends, I know the big stuff matters. I'm not suggesting it doesn't. But I do think the best we can do in times like this, if we are not to go mad, is to keep our hearts focused on the truth, maintain our integrity, perform our duties, and cling to the cross. Ultimately, my faith does not hinge on what happens in the Vatican. In the Middle Ages, there were plenty of Catholics in places like Ireland or Poland who, by virtue of their distance, might not even know who the current pontiff was, let alone be following what was going on in Vatican politics. That's what I have been doing...living as if I was a Catholic in Greenland circa 1150 AD. And living in Michigan in the winter, it might as well be Greenland. The picture atop this post is one I snapped of my yard and the field across the road last month.

So yes, dear friends, I am back and happy to bring Unam Sanctam Catholicam into its 11th year. Bless you all!
Posted by Boniface at 3:29 PM

Welcome back, you were missed. It sounds like you are in an excellent place spiritually, personally and professionally. Peace and joy to you and yours.

Yes, yes, welcome back! Your words find me divided right in half, half of me agrees with you completely that our spiritual lives are far more important than the group of heretics and apostates that have obviously taken over our church, and other half believes we are going to need to grab pitchforks ourselves and go to Rome to oust these destroyers post haste. At any given moment I am in one camp or the other.
Bienvenido!

Amen, Boniface, it seems you’ve taken a much needed deep breath. If you haven’t had a chance to read it, you might appreciate the first quoted paragraph on page 62 of Robert Cardinal Sarah’s “The Power of Silence.”

Thank you for the recommendation, friend.

Good for you on all counts!

Good to see you back, brother. Just happened to check out your blog again. Your approach to Vatican politics is largely the same as mine. It helps to focus on working out your own salvation and keeping your sanity if you try to to stay away from these type of news.

Thank you Konstantine. Bless you for your continued patronage of this blog.