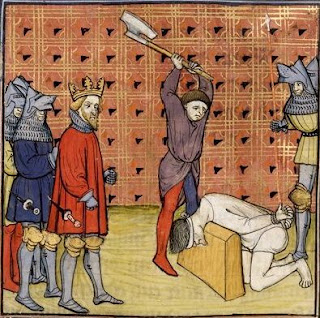 On this blog's Facebook page, I recently linked to an article on The Josias by Dr. John Joy, STD, addressing the magisterial weight of Pope Francis' amendment to the Catechism of the Catholic Church on the death penalty. It is an excellent piece you should all read.

"Does it follow [from Dr. Joy's conclusion] that Catholic politicians and voters are morally obligated to support efforts to abolish the death penalty in developed nations? I primarily have the United States in mind. If a voter fails to support efforts to suppress the death penalty would that be a grave sin? If a Catholic fails to believe that using the death penalty is sinful in the modern context would that be a grave sin? I am trying to understand how strong is the obligation to give religious submission of will to the Holy Father's teaching."


I reached out to Dr. Joy with the question and got the following response:

"It's not clear to me at this point how this text [of the Catechism] should be understood, so it is hard to know exactly how Catholics should respond. But here are the three most likely possibilities as far as I can see:

(1) If the text is meant to be understood as a doctrinal assertion of the intrinsic immorality of the death penalty, then it must be rejected as formally heretical.

(2) If it is meant to be understood as a doctrinal assertion of the intrinsic immorality of the death penalty when not absolutely necessary for public safety, then it must be rejected as erroneous and at least proximate to heresy if not formally heretical.

(3) If it is meant to be understood as a prudential judgment about the applicability of the death penalty in the present circumstances, then I would assume that the words of Cardinal Ratzinger would still apply:

"If a Catholic were to be at odds with the Holy Father on the application of capital punishment or on the decision to wage war, he would not for that reason be considered unworthy to present himself to receive Holy Communion [i.e. it would not be a grave sin]. While the Church exhorts civil authorities to seek peace, not war, and to exercise discretion and mercy in imposing punishment on criminals, it may still be permissible to take up arms to repel an aggressor or to have recourse to capital punishment. There may be a legitimate diversity of opinion even among Catholics about waging war and applying the death penalty, but not however with regard to abortion and euthanasia" ("Worthiness to Receive Holy Communion: General Principles", July, 2004).

Therefore, it is doubtful at best whether this new text imposes any obligations on the faithful, and a doubtful obligation is no obligation at all. If there is an obligation imposed by this text, I think it is probably this: that Catholics ought "to encourage the creation of conditions that allow for the elimination of the death penalty" (CDF, Letter to the Bishops, August 2, 2018); understood in this sense, that we ought to do what we can to create a society where the death penalty does not need to be used in practice because capital crimes are not committed. That's a goal that any Catholic should be able to get on board with."

Dr. John Joy is the Co-Founder and President of the St. Albert the Great Center for Scholastic Studies. He earned his master's and licentiate in sacred theology at the International Theological Institute in Austria and recently defended his doctoral dissertation at the University of Fribourg, Switzerland. His primary academic interests are in the theology and philosophy of St. Thomas Aquinas, dogmatic theology, and especially questions of infallibility and the magisterium of the Church. He is the author of On the Ordinary and Extraordinary Magisterium from Joseph Kleutgen to the Second Vatican Council, as well as earlier works Poena Satisfactoria and Cathedra Veritatis: On the Extension of Papal Infallibility. He writes for various online Catholic publications, including One Peter Five and The Josias.
Posted by Boniface at 3:03 PM

Ratzinger: “There may be a legitimate diversity of opinion even among Catholics about waging war and applying the death penalty, but not however with regard to abortion and euthanasia.”

Except that the justification of the death penalty relies on the virtue of justice and the natural law. So, one may argue what situation justifies the death penalty or what methods may be used execute a man, but one may never have an opinion that it should be eliminated or never used because of another new non-lethal option.

With this said, any catechism that suggests the death penalty as evil, that it should be totally eliminated, that it’s application is only to “protect society.” or implies a so-called “moral obligation” of Catholics to eliminate the death penalty is in error.

This situation is not a toleration of an “opinion” which we can disagree, but an error that strikes at the very tenants of justice and law as authored by God.

I guess what I am saying is that if Ratzinger thinks there is a total legitimate diversity on this issue then he is wrong. To use his examples; like with abortion and euthanasia, the death penalty does have an aspect that is not negotiable and cannot be subject to personal opinions.