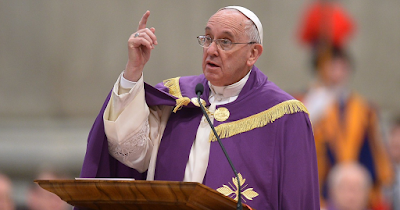 This past week Pope Francis announced that he was officially changing the Catechism of the Catholic Church to reflect his assertion that the death penalty is always immoral under all circumstances and thus never permissible. Of all the things going on in the Church and world that require action, to devote his energy to this topic, well, it was so incredibly brave and bold (*sarcasm*).


Much has been written on the subject in the past week, such that I do not feel I need to add anything. However, for some background on the context of the modern about-face on the death penalty in the Catholic Magisterium, I would like to recommend my articles "Death Penalty & Retributive Justice" (USC, Nov. 2015) and "A Reminder About Capital Punishment" (USC, Mar. 2015). Also worth reading are two essays by J. Budziszewski and Matthew J. Belisario respectively, "Capital Punishment: The Case for Justice" (First Things, 2004) and "The Corrupt Theology of the Seamless Garment" (Coalition for Thomism, 2010). Finally, the book By Man Shall His Blood Be Shed by Edward Feser and Joseph Bessette, which gives the most thorough Catholic defense of capital punishment.

For a more contemporary reaction to the changes in the Catechism and its implications, 1 Peter 5 has two decent articles, here and here. For a more scholarly reaction from a trustworthy contemporary theologian, see John Joy's article "The Magisterial Weight of the New Text of the Catechism on the Death Penalty" (The Josias, Aug, 2018).

So, while I am not going to offer any defense of the traditional Catholic position here, I do want to comment on what I would call the meta-issue that overshadows Francis' amendment to the CCC: that is the concept of the papal Magisterium as a creative outlet for a current pontiff's pet theories. 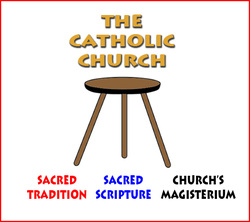 Traditionally, the Church's teaching is encapsulated in something called the deposit of faith. The deposit of faith is the body of revealed truth in the Scriptures and tradition proposed by the Roman Catholic Church for the belief of the faithful. This "deposit" is protected and promulgated in three ways: Sacred Tradition, Sacred Scripture, and the Church's Magisterium. Scripture and Tradition are the written and unwritten revelations of God, while the Church's Magisterium forms a kind of living, interpretive arbiter of Divine Revelation.

The job of the Magisterium is to look at a given subject of faith or morals and tell the Christian faithful what the Church's constant teaching has been. It is a living voice of Tradition in every subsequent generation. We are probably all familiar with the concept of the stool with three legs which represents how these three elements, Tradition, Scripture, and Magisterium interact.

The role of the Magisterium is to tell the faithful of each generation what the unchanging truths of the Catholic Faith are. If there is confusion about a teaching, the Magisterium is supposed to diligently seek the solution in the sources of faith and propound it faithfully.

Contemporary Catholicism, however, seems to have adopted a new view of the Magisterium. Rather than authoritatively explaining the Church's perennial tradition, the contemporary Magisterium has become the mechanism whereby a current pope's priorities are transmuted into policy.  A pontificate thus becomes more akin to an American presidential administration, where each successive president has certain policy objectives that are implemented through the machinery of the federal government. Instead of asking, "What does the Church teach?", the question is increasingly becoming, "What is the policy of the current pontificate?"

Obviously every pope has had and always will have things that are of special importance to him; but what I think alarming is seeing the way the contemporary popes—beginning with Paul VI but really culminating in Francis—essentially endeavor to recreate the Magisterium with each successive pontificate to reflect their own personal pet-projects.

For example, look at the subject of Catholic social teaching since Vatican II. Paul VI gave us Populorum Progessio, the first post-conciliar Catholic social teaching encyclical. St. John Paul II gave us three, Laborem Exercens (1981), Sollicitudo Rei Socialis (1987), and Centesimus Annus (1991). Then Benedict XVI wrote Caritas in Veritate (2009). Not even a decade has passed and the Franciscan pontificate has promulgated Evangelii Gaudium (2013) and Laudato Si (2015). One gets the idea that each new pope is expected to issue his own social teaching encyclical—not because the needs of the Church require such an encyclical, but because it is expected that a new pope will want to put his own "stamp" on the Church's body of social doctrine. It seems as if the way modern encyclicals are used is that they become occasions for each pope to re-evaluate a subject in light of his own particular interests. When a new social encyclical is issued, pundits' mouths water as they wonder "What is this pope's take on Catholic social teaching?", as if it is each pope's job to "shape" what comes down to them by offering a new "take" each pontificate. (Related: "The Curiosity of the Modern Papal Encyclical", USC, June, 2015).

Yes, the Magisterium is treated the way a president would treat the federal government: as an outlet for his "policy objectives." We even have gotten to the point where Pope Francis' new amendment to the Catechism cites as its source a letter of the very same Pope Francis. How humble! And the letter is supposed to have been elevated to Magisterial authority by its inclusion in the Catechism. This seems kind of backwards, as originally the CCC was promulgated as a compilation of teachings already considered authoritative. A teaching was considered authoritative, and therefore included in the CCC; now a teaching is included in CCC and therefore considered authoritative. It all feels so lop-sided.

One final consideration: Those in the Church calling for the global abolition of the death penalty usually do so in the context of citing a ever-growing groundswell of public opposition to the death penalty in civil society at large. To put it bluntly, the Church is trying to take the position of being "on the right side of history" by suggesting there is a popular outcry against capital punishment.

For example, St. John Paul II, in Evangelium Vitae (1995), wrote "there is evidence of a growing public opposition to the death penalty (EV, 27). He goes on to say "there is a growing tendency, both in the Church and in civil society, to demand that it be applied in a very limited way or even that it be abolished completely" (55). Benedict XVI, also, in a letter of November, 2015, cited his opposition as being in keeping with "political and legislative initiatives being promoted in a growing number of countries to eliminate the death penalty." And of course, Pope Francis' amended Catechism paragraph, which reads "Today, however, there is an increasing awareness that the dignity of the person is not lost even after the commission of very serious crimes" (CCC, 2267).

I am not suggesting there aren't many moderns who dislike the idea of the death penalty, but I simply don't see it as a strongly polarizing issue that is drawing a groundswell of popular opposition. I think when the popes cite growing opposition, they are mainly citing the opposition of some determined members of the hierarchy who latch on to this issue precisely because it is so safe and non-controversial.

I submit there is no strong growing opposition; there is a collective shrug and a "meh" from an ambivalent public. The pope is taking a subject that at most elicits moderate levels of disagreement from people and trying to elevate it to become This Year's Controversial Social Justice Issue.

All of this has come about because of an excessive interpretation of "human dignity." You can thank pseudo-Saint JPII for pushing this himself, influenced no doubt by his love of personalism.

The Pseudo-Saint, in the CCC and in other writings, describes the death penalty only in terms of it's value for the safety of society and like Francis, does not speak of proper justice as demanded by natural law. Francis takes the error one step further by taking an already erroneous view of human dignity and making it invincible even in the face of justice and natural law. It is a natural consequence that Francis and the gang come to these conclusions, a vile development derived from men like pseudo-saint JPII.

Everything that is going on has not emerged from nothing. All of the evils that formed during that past century, bad theologies and bad philosophies, are now bearing full fruits in the men they formed. One such man happened to be Bergoglio, formed during the 60s and 70s. He is so ecstatic about that time period, he about to canonize yet another scandal filled pseudo-saint in Paul VI.

Isn't it nice we have a liberal pope to push liberal positions so that the liberal media can stop talking about the crimes of Cardinal McCarrick?