Sadder Than When I Came In 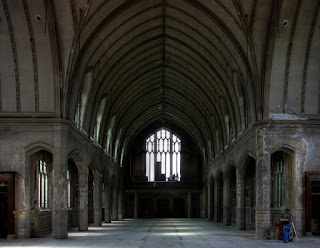 I walked into the parish around twenty minutes early for Confession. This was not my parish, but I often came here for Saturday Confession because it is close to my work and the associate pastor is an excellent confessor. I walked around and entered a small, back door. That is normal with these large, historic urban churches. They are often in bad parts of town and keep the front doors locked during the day. The Catholic populace in the immediate neighborhoods having long died, the historic churches in these parts of town linger like old monuments of better days.

I dipped my fingers in the holy water font inside the door and walked through the vestibule into the sanctuary. The door way opened into the sanctuary from the side, and I was a little surprised to find a very large gaggle of people milling around in there. A wedding party, from the looks of it, doing a Saturday afternoon wedding rehearsal. They all immediately turned and stared at me awkwardly, looking at me like I was an intruder in their private space.

I made the sign of the cross and they shrugged and returned to their rehearsal, a loud, rambling affair. I walked across the church and sat down in the pew near the confessional, an old, ornate wooden kind that in most parishes is being used for storage. I was twenty minutes early for Confession, but the light was already on indicating the presence of the priest. I could see through the stained glass on the door that the confessional was open. I walked in, but could see through the screen that there was no priest. I stood in there confused. The wedding party people stared at me. "Okay," I thought. "It's like one of those stores where the shop owner lazily leaves the neon "OPEN" sign illuminated 24/7 even thought the business is closed." I went and plopped myself back down in the pew and prayed.

I tried to concentrate, but the wedding party was very distracting. The bridesmaids posed for pictures immediately in front of the tabernacle with no acknowledgement of it's existence whatsoever. The entire crowd milled about the elevated dais which is usually reserved for the minister. A cluster of women stood right up around the table altar, laying their cell phones and papers on it like it was a table—of course, it doesn't help when the altar looks like a table. They gabbed and blabbed; one woman set down a bottle of soda on the altar. A few young kids chased each other in circles around the altar while the adults talked, elbows resting on the altar top. The little urchins took to their hands and knees, scrambling in and out under the legs of the table altar. I got out my cell phone and took a video of the debacle, intending to send it to the parish office later with a humble request that if a wedding party was using the church, a representative from the parish should be in attendance at all times to ensure proper decorum.

What an outrage to put a soda on the altar. But then I thought about why I was here and said to myself, "I have committed worse outrages than that." That doesn't make the placing of soda on the altar acceptable, but it does keep the self-righteousness at bay.

Finally the wedding party began to drain out of the church. The women picked up their car keys and cell phones and beverages off the altar. Just as the last of them walked out, the door opened and the priest came in. I don't know if he was hovering around outside the doors intentionally waiting for the wedding party to leave so he didn't have to chit-chat with any of them, but that's what it seemed like.

This was not the usual priest. He seemed like he was from out of town. He was unfamiliar with the sanctuary. He walked into the confessional. I was first in line, so I slipped in and closed the door behind me.

He was sitting down behind the grate. "Hey," he said blandly.

He made the sign of the cross, mumbling the invocation  of the Trinity. "Okay," he said awkwardly, as if he was trying to say, "Okayyy...let's get on with this." It always hurts my heart when the priest's opening is so informal.

I made a very heartfelt confession. There were several things that had been on my heart for awhile that I knew I needed God's grace for. It was one of the more humbling and humiliating confessions I've ever made. The priest responded, "Mhmm...mhmm," as I accused myself before God. I could see him flipping through a book of some sort behind the screen. I tried not to look at what he was doing. I had my hands folded and I looked at them instead.

Finally I finished. "That's all I have to confess, and I plead for God's grace to overcome my faults," I said.

"For your penance, do one-half of an Our Father now say your Act of Contrition," the priest said. I was a little startled and somewhat disappointed that he had no words of encouragement or advice for me, given the deep, heart-rending confession I'd just made. But to be given "one-half an Our Father" for penance? What does that even mean? I was frustrated and sad. Fine. If that's the way he wants it, I thought. I mechanically regurgitated the Act of Contrition by rote—not insincerely, but with no more external effort than necessary to formally satisfy the request. He absolved me and I exited the confessional, freed of my burdens of sin but sadder than when I came in.

This need not be published.

No placation or "answer" follows, only one who weeps with they that weep. It has been a rough ... while, even for those on the fringes watching the meltdown.

I'm 65 and over the last 50 years of ups and downs have met also with some heartbreaking attempts to extract some drops of peace from an irreverent or more likely uninformed confessor. I trust that you were heartened by the new Bishop Vigano gave to us all several hours after your heartbreak; God loves us and will not leave us alone. No matter how ugly this proceeds His intervention (through Our Lady obviously!) will strengthen us mightily in the times ahead. With fraternal love and appreciation for your great work. Thank you.

How painful; there is just so much loss these days. I will pray for that priest; mostly that he might come to know joy in his priesthood. Because of parish mergers and clergy reassignment, we are losing our wonderful priest next month. I find myself willing my brain to retain everything about the way he celebrates the Holy Sacrifice of the Mass, or sings for Adoration, or graciously hears my Confession. These treasures are my hedge against the dry and sad days I know are just around the bend. It seems we die a thousand deaths....

Ever since my joining the Church in 2011, confession has been my greatest struggle with Her. I want so badly for the priests of the Church to take the sacrament seriously and while there are rays of hope, ive been disappointed far too often. This post, wonderfully written, breaks my heart. I can identify with it in the most personal of ways.

Not reporting abuse out of humility is, I think a false humility. Imagine how many seminarians didn't report McCarricks sins because they themselves are also sinners.

Agreed. But who said I wasn’t going to report it? I definitely am. That’s why I took the video

According to an Associated Press article about former Adelaide (Australia) Archbishop Philip Wilson's conviction of covering up child sexual abuse, Adelaide (the capital of South Australia state), will bring in laws in October obliging priests to report evidence of abuse heard during a confession. The Australian Capital Territory and Tasmania state are planning similar laws.

Although I can't imagine a sexual abuser will confess his sins, the sodomitic sexual abuse will be the catalyst to break the seal of confession completely.